Who is the boss in Syria and how does it affect Israel’s security? 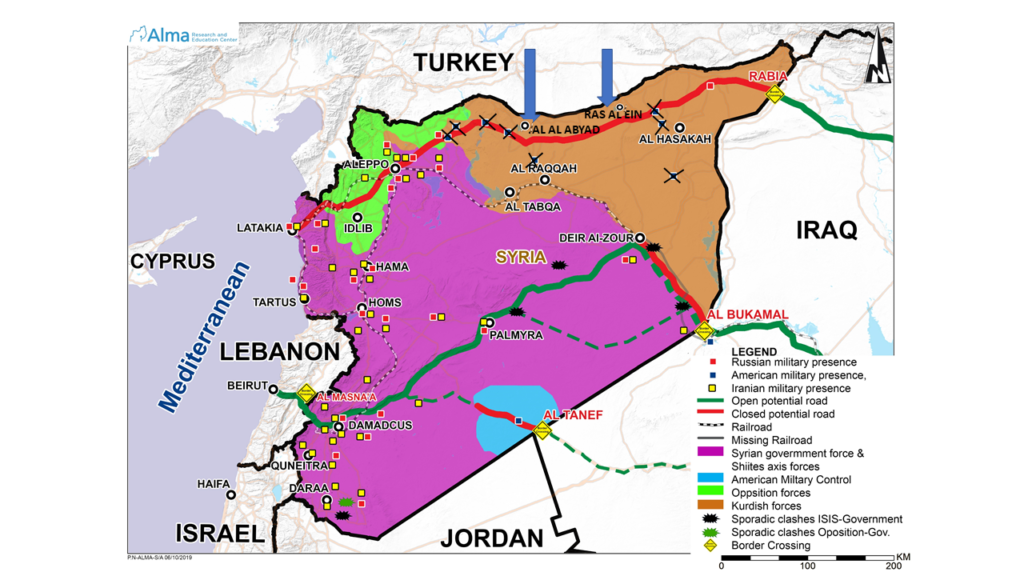 [vc_row][vc_column][vc_column_text]15 years ago, when I was a young officer in the IDF, I described the Turkish Prime Minister Erdogan as the ‘Strong Man on the Bosporus’. Tayyip Erdogan was then a young prime minister who was just elected with a weak opposition in Turkey who was dealing with a severe economic crisis. But I would never have imagined that Erdogan would command such influence on long-term processes in the Middle East.

This week, Erdogan proved that whoever has boots on the ground controls the area. The Middle East is unfamiliar with ruling from afar. With the US declaring an actual withdrawal from the Kurdish regions of northern Syria a month ago, Turkey embarked on an operation aimed at establishing a security zone across the Syrian-Turkish border from which Turkish militias would be evacuated and Turkey will be able to relocate the millions of Syrian refugees who arrived since the civil war. In other words, an ethnic cleansing of the Kurds and the settlement of Sunni Arabs in their place, including ISIS operatives and their families. That operation relies on continuing Turkish control of Syrian territory, using Syrian rebel militias as proxies supported by the Turkish Government.

Erdogan claimed that the operation and purpose was justified because the Kurdish militias who defeated ISIS with American support were no more than terrorists. In this context, during the Syrian civil war, the Kurds took over a quarter of Syria’s territory thanks to their victories over ISIS. Hence, the Assad regime, though not interested in the Turkish invasion, sought to reduce the spread of the Kurdish militias. At the time of the US withdrawal, Syrian forces were provided with Russian aid in order to prevent a Turkish takeover.

In an attempt to prevent a Kurdish massacre, the US government sent its two most senior officials to Turkey – Vice President Pence and Secretary of State Pompeo – in order to negotiate with Erdogan. Turkey, a member of NATO, is trying to play all its cards whilst maintaining a strategic advantage. According to reports, Turkey had wished to create a significant security buffer zone but following significant pressure from the Americans, ultimately agreed on narrower field in a way that would not grant it broad control over the “original” Kurdish areas where the Kurds had lived prior to the civil war – incidentally those same areas attacked by the Turkish Army.

But yesterday we were told that Erdogan had no problem signing an agreement with the US government only to sign a different agreement with the Russians a week later. The Russian President had made Erdogan an offer that he could not refuse. Not all the details are clear here either, but Erdogan seems to have gotten a better deal from Putin than that obtained from the Americans – with the security zone agreed upon being larger and with the Russians also assisting Turkey in joint patrols in the area.

First, these events have made it clear – the rulers in Syria are the Russians, the Iranians and the Turks. President Assad has no real power and the Americans do not want to interfere in this area. The three forces above will cooperate or act against each other according to their interests, with no basic rivalry or deep alliance.

Secondly – on a practical level, it is unclear whether joint Russian-Turkish operations will succeed in preventing ISIS from “lifting its head” again in this area, and there is a clear risk that this security strip will turn from a NO MAN’S LAND to an EVERYBODY’S LAND, where they will all fight each other: the Kurds, Turks, ISIS and the Russians.

Third – even on a practical level – it is currently unclear how these developments will affect the other areas occupied by the Kurds in northern Syria and to the east of the country in particular. In my estimation, the weak position held by the Kurds will not allow them to continue to control the territory particularly as Iran is already eying the Al Bukamal border crossing as one of its three supply routes from Tehran to Syria. These supply lines allow Iranians to equip the Shiite militia with military equipment that threatens not only Syria’s stability but especially Israel. In this context, it is unclear whether the Kurds who felt abandoned by the US will now turn to Iran for support and accept Iranian influence on the ground.

Fourth – it is unknown what will happen to the southernmost land corridor from Tehran to Damascus.  The shortest of the three available routes between the two capitals, the corridor was previously blocked by the presence of U.S. forces on the Al Tanef border crossing between Iraq and Syria.  It is unclear whether the Americans will pull out and whether they will relocate their forces to the Iraqi side of the border, as President Trump has previously suggested.

Fifth – a very strategically important factor for Israel’s security. The message to all extremist players in the neighborhood of the Middle East – from Iran-led Shi’ite Islam to both ISIS and Erdogan as figurehead of the Muslim Brotherhood – is that the United States has abandoned its allies. Despite the US attempt to make it clear that it has significant economic leverage on Turkey’s membership in NATO – ultimately, anyone not on the ground does not control the territory. These are the rules of the jungle that is the Middle East.

Israel, as part of the Gray Zone campaign, has invested significantly to build up its deterrent power to thwart Iran’s ability to attack Israel from Syria.  However, these recent developments are of great concern to Israel and its leaders are likely to ask Americans to find a way to send a simple message to the Shiite axis that “American support is still valid; and whoever messes with Israel messes with America.”  It will take great creativity to convey this message without a physical presence in Syria.

Moreover, Israel’s security relies heavily on US support in both deeds and words. And in the Middle East where Iran is aiming for a nuclear bomb and Hezbollah already owns 100,000 rockets targeting Israel, the words have no less significance than the deeds. If Israel’s enemies feel that the United States will not stand by Israel in war, they will not be deterred from attacking it.