Are Units in the LAF in Danger of Becoming a Proxy of Hezbollah? 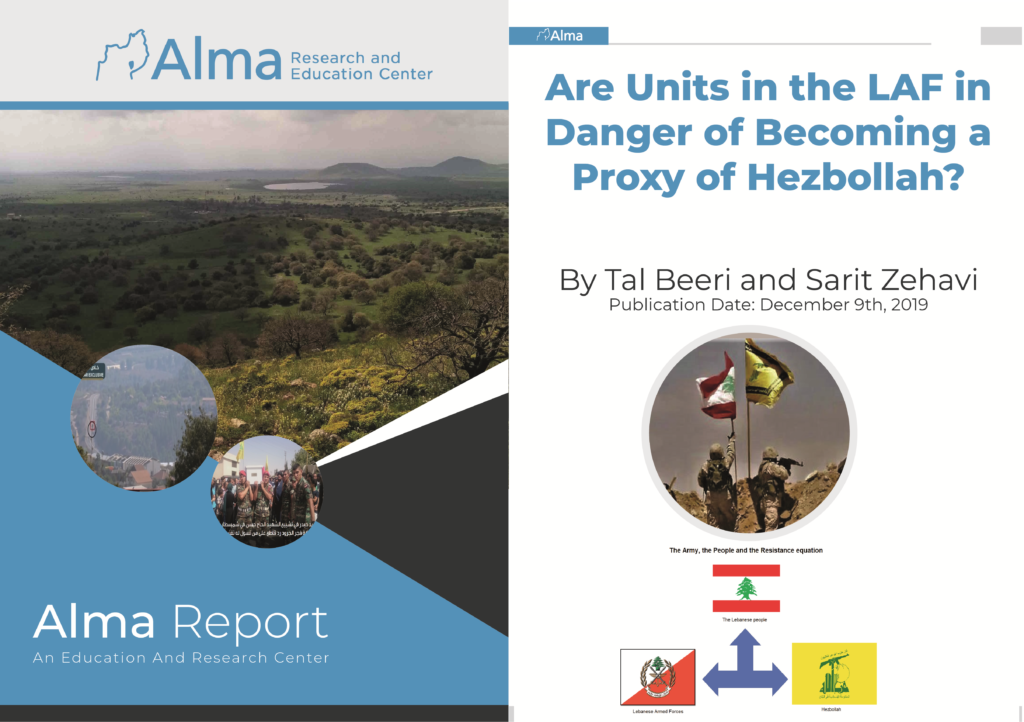 During the past few years, there has been a significant rise in the number of Shiites serving in the Lebanese Army (LAF) with an emphasis on combat unit personnel.

Family ties between Hezbollah operatives and LAF officers and soldiers have increased the potential for using the LAF, especially in southern Lebanon, as a corroborating platform or even as a proxy for Hezbollah to carry out offensive operations against Israel, both in routine times and in war.

In light of the above, the LAF cannot be considered to act independently to the interests of Hezbollah. Rather, the LAF has a strong affiliation with Hezbollah, particularly its operations and deployments across Southern Lebanon.

In February 2017, Lebanese President Michel Aun formulated his statements on the issue, noting that the state of Lebanon, the LAF, and Hezbollah are all part of one alliance directed against Israel.

Several events taking place along the border in recent years indicate circumstantial links between Hezbollah’s interests and actual attacks carried out by the LAF against Israel. It is difficult to explain these events unless we presume that Hezbollah initiates them or at the very least, that these events demonstrate the willingness of the LAF to assist Hezbollah.

The LAF will strive to maintain and strengthen its status, competing with Hezbollah for the title as “the defender of Lebanon”.  In our assessment, the LAF, which has been deployed in South Lebanon since 2006, will take an increasingly active part in any future war against Israel. Assuming that any U.S. aid that has been given to the LAF will be deployed in Southern Lebanon, it logically flows that such aid is likely to be used against Israel in any future war.

For these reasons, it is important to dismantle the integration that exists between the LAF and Hezbollah and challenge the tripartite principle; “the people, the army and the resistance” which remains a prominent part of Hezbollah’s indoctrination efforts.

The US strategy behind its massive aid to LAF is the belief that by doing so, the US is promoting an alternative to Hezbollah, in the hope that it will also affect the “day after,” when it is possible that the terrorist militia will one day be defeated. However, it appears that the US military aid has not made the LAF any stronger; and it has not weakened Hezbollah either.

The US has imposed wide-ranging sanctions against Hezbollah since 2017, while simultaneously providing aid to the LAF. However, it is becoming increasingly difficult for the U.S. to balance these two positions. The LAF has failed to disarm Hezbollah and appears to not have any intention to do so, with the consequence that Hezbollah is now accepted as a legitimate force in Lebanon, both politically and militarily.

However, a complete suspension of the U.S. aid to the LAF may create a risk that the Russians or even the Iranians may fill the likely vacuum.  If that occurs, the US will lose its influence in Lebanon and the Russians or Iranians will have an opportunity to fully take over control.

Limiting Western military aid to the types of weapons that do not endanger the IDF is also an important consideration for any future scenario where there will be a conflict between Hezbollah and Israel.

Taking into account the intelligence already presented regarding Hezbollah’s military deployment in Southern Lebanon, Beirut, and elsewhere – it is worth considering adopting a scaled policy, one which is defined by clear timelines and conditions, in order to continue to provide military aid only after there have been very clear changes on the ground.