Almost 9 years have passed since protests in southwest Syria sparked the uprisings and civil war. Since then, the conflict has transformed from demands calling for change, to a proxy war fueled by foreign interests. Consequently, the people’s grievances and demands of March 2011 have been forgotten. Regardless of ongoing clashes between foreign forces, the struggle of the Syrian people continues to persist. A microanalysis study of the war and its development in the Daraa province (which sparked the uprisings back in 2011), will be able to shed light on the Syrian people’s momentous frustration.

It is not incidental that the uprisings began in the peripheral area located approximately 62 miles (100 km) from the Syrian capital of Damascus. Since gaining independence, Syria has suffered from coups and revolutions, struggling to sustain stability. In 1970, once former General Hafez Al Assad seized power of the country, he strengthened the peripheral areas thus maintaining and reinforcing his control over these areas. Following his death in the year 2000, his son Bashar Al Assad became President. Unlike his father, Assad the son who studied in the metropolis of London aspired at improving the main and big cities of Syria whereas neglecting cities in the peripheral areas.

The Arab spring sparked an uprising in Tunisia, followed by protests against regimes throughout the Arab world, most notably, the actions of the Egyptian and Syrian youth. On February 27, 2011, youths from the city of Daraa, in the Daraa province of southwest Syria, painted graffiti on the town’s walls, calling for the fall of Assad. The “Syrian narrative” claims these youths disappeared and when their parents asked the Chief of Police of their fate, he replied; “You can forget about them and make new ones”. This “spark” led to the uprising that began in March 2011. Later that month, the civilians of Daraa destroyed the statue of the late Hafez Al Assad, an act symbolizing the beginning of the Syrian civil war. 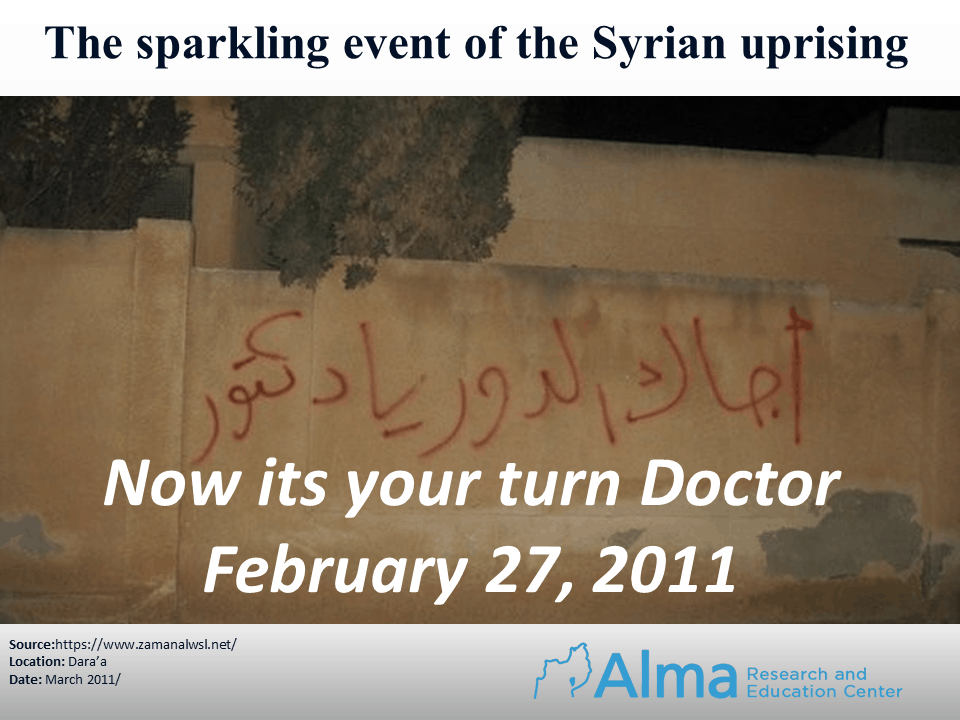 After four years of clashes, the city of Daraa had been divided between government supporters and dissidents, with the latter losing. By 2018, the Syrian opposition sustained heavy losses due to Russian and Iranian intervention that supported the Syrian Government. In July that year, the regime’s forces marched towards the Syrian southwest after sustaining victories throughout the country. The Syrian government imposed three choices on the opposition: fight, surrender and ‘reconcile’ with the government or exile to the Idlib province, the last opposition enclave, currently under siege by the Syrian government and its allies. Eventually, the Opposition surrendered, and the province fell under the control of Assad.

The people’s grievances had not disappeared over the past seven years of war with the government, they rather intensified. In addition to dictatorship, corruption, poverty, and neglect, the Assad regime had gone into war against its people, causing massive losses of life and property to the civilians throughout the country. Rather than true reconciliation and addressing the existing grievances, Assad continued to neglect the southwest province. Addressing such massive issues in a time of war is indeed impractical, but basic measures could have been taken, particularly keeping in mind that the province in question is the one where the uprisings began. By December 2018, the people’s frustration was apparent. In the town of Al-Hirak in the Daraa province,  new graffiti was spotted, one calling for the fall of Assad. It did not create an uprising, but the voices in demand for condition improvements became louder. 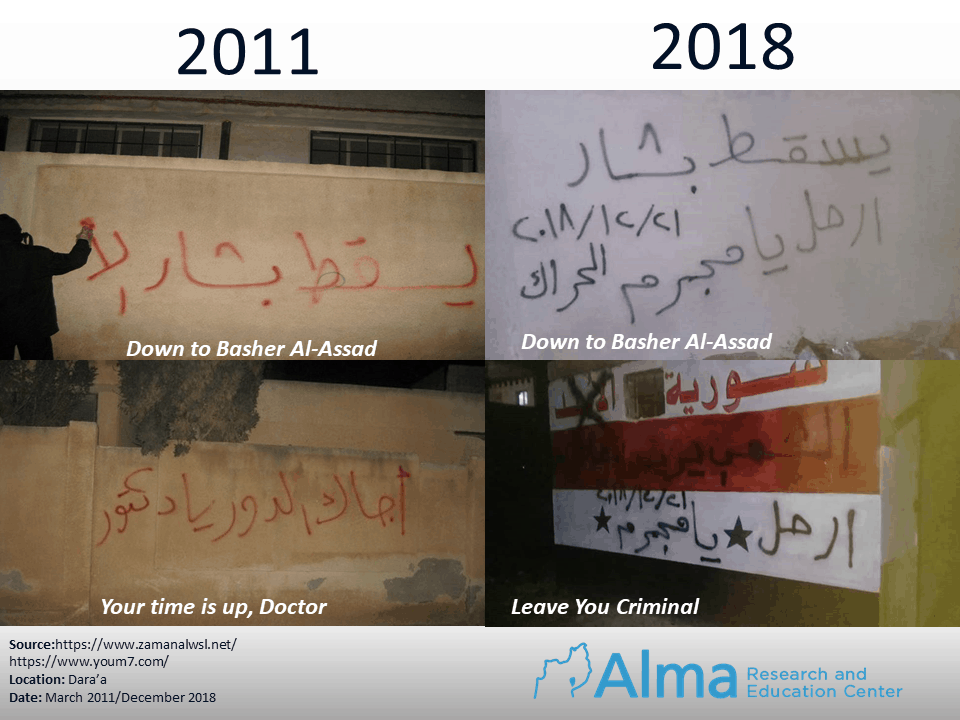 Until the point the opposition surrendered, the city of Daraa itself remained divided between the Syrian opposition and the government, therefore, suffering massive destruction. Thus, the primary demand of the Daraa population after losing to the government had been the reconstruction of the destroyed city. “Law no. 10 for the Reconstruction of Syria” was already implemented in April 2018, yet the government still disregarded the city and the province. Instead of addressing the matter, the government added gasoline to the fire. In March 2019, the government decided to reconstruct the statue of Hafez Al Assad, destroyed eight years earlier in an act symbolizing the beginning of the uprisings. This act in the eyes of the people portrays Assad’s statement in response to their demand, saying, “I won”.

The reconstruction of the statue created a new reality of unrest. Since then, clashes have been on the rise, and that is still the current situation today. Since it regained control, Assad systematically arrested former opposition members who supposedly reconciled with the government, increasing the frustration and distrust of the population. Moreover, in response, sporadic attacks on military bases by former opposition members took place throughout the province.

Despite the tensions with the population, the Assad government has not diminished its pressure recruiting the province’s youth into the army. Exhausted from 8 years of war, the army has amended the conscription law in Syria to enlist young men in areas it had regained control over in the past two years. In response, opposition activists in Daraa spread signs and organized protests calling for civil disobedience, refusal to enlist into the Syrian Army and to revive the revolution. The sign, which perhaps describes the situation best in Daraa and Syria today, is the people’s declaration; “You might have defeated us on the ground, but our revolution remains alive in our hearts”.

The tension between the people and the government escalated quickly into clashes. On the one hand, locals planned and executed attacks on military posts and Syrian soldiers throughout the province, while on the other hand, the government intensified its arrests of former Opposition leadership (despite their formal acceptance to reconcile with the government). One of the most notable clashes so far since the government has regained control over the Syrian southwest has taken place in the town of Sanamayn in May 2019. The town fell under siege for about 8 days, as the result of clashes between locals and a security patrol that attempted to arrest two civilians and a former opposition leader in the town. The locals tried to prevent the arrest with force, an act resulting in the death of two Syrian soldiers and the laying of a siege on the town lifted only as the result of Russian intervention. These incidents are happening constantly throughout the entire province and so far seem to be the acts of individuals from within the province, motivated grievances and frustration rather than religious ideology or affiliation. 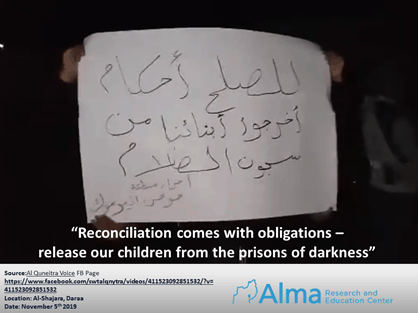 The latest major development has been seen since the dawn of 2020. In January of this year, we witnessed multiple attacks by opposers of the government and even the imprisonment of Syrian Army soldiers for the sake of prisoners’ exchange. The actions of those opposing the government are becoming more strategic and planned out (yet secretive) in comparison to the sporadic acts that started from around mid-2018 till the end of 2019. In Mid-January for example, a group of unknown armed men attacked a checkpoint between the towns of Al-Hirak and Al-sura; simultaneously, others bombed a Syrian intelligence building.

Assad’s lack of attention to the grievances of his citizens has increased instability in the province where the Syrian civil war began. The conflict, however, has turned into a proxy war instead of an internal struggle; nevertheless, the approaching end of the proxy war of foreign interests will not guarantee internal stability for the country. The case of Daraa highlights the fragile control Assad has on his country, all of which at a time Russia and Iran are collecting the fruits of supporting the Syrian government. These clashes are not unique to Daraa, but also exist on a smaller scale in parts of Aleppo, Suaidaa and Homs province as well. Thus, the undermining of the people’s problems, in the proxy war, may surface once more, particularly if their grievances remain an undiscussed topic in the discussion of the future of Syria.