Does the Corona crisis constitute a restraining factor for the Shi’ite military buildup in Syria and Lebanon against Israel? 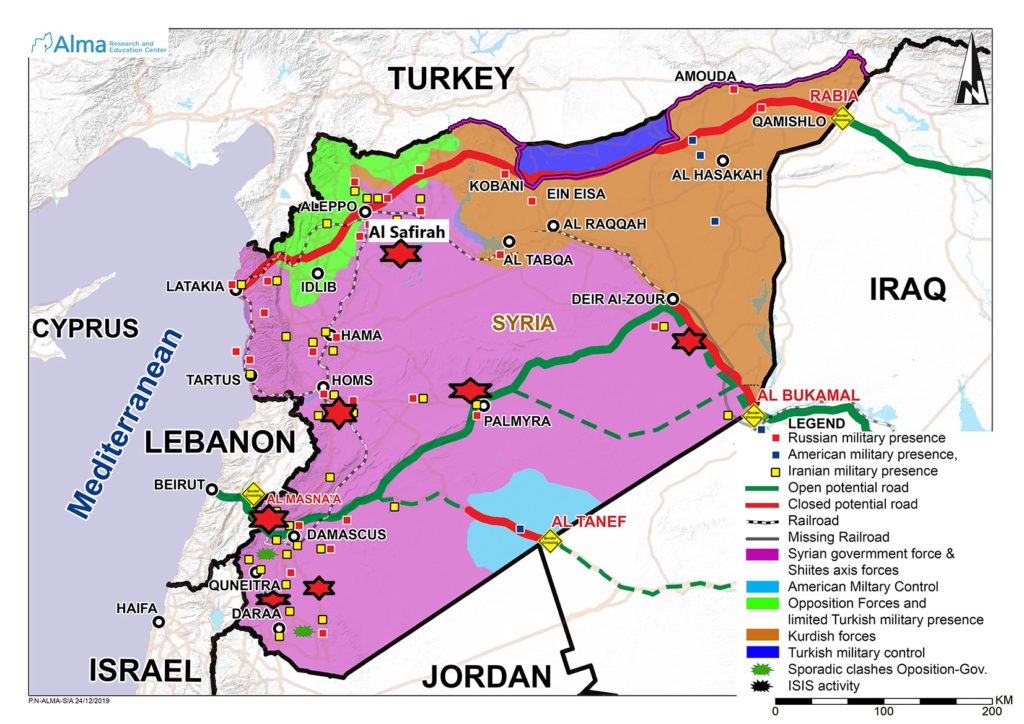 The global Corona crisis has constituted a generally restraining factor for the various players throughout the Middle Eastern arena. Since the outbreak of the crisis last March, there has been some decline in the activities of the Shiite elements in Syria and Lebanon. However, during the month of April, the Shiites appear to be back to normal, as these days of crisis present them with an opportunity to promote targeted operational moves in the northern arena.

We estimate that Iran and Hezbollah are taking advantage of the global focus on the Corona crisis in order to fulfill their goals in the region and to the cultivating of their strength.

This reflects mainly in the continuation of the Iranian grip on Syria, the accelerating and development of Hezbollah’s precise weapons project in Lebanon, and in further establishing terrorist infrastructures within the “Golan portfolio” in southwest Syria, near the Israeli border.

Over the past few weeks, aircraft of unknown origin carried out a number of airstrikes throughout Syria, the international and Arab media attributed all of the following airstrikes to Israel:

15 April 2020 – A private vehicle at the “Al Masnaa” border crossing between Syria and Lebanon.

1 May 2020 – In the city of Quintiera, in southwestern Syria, near the border with Israel.

4 May – Al-Safirah region east of Aleppo in northern Syria and Al Mayadin, near Dir Azur in eastern Syria.

Based on the nature and location of the airstrikes, we believe in a high probability that Israel perpetrated the attacks within the framework of the “campaign between the wars“[1]. The purpose of several of the airstrikes was to damage Iranian and Hezbollah operations and equipment in Syria. However, at least one airstrike was intended as a warning. To our understanding, this was the airstrike on the private vehicle at the “al Masnaa” border crossing between Syria and Lebanon on 15 April.

After analyzing the photos and the video of the airstrike released in the media, it is our understanding that this was an Israeli attack against Lebanese Hezbollah operatives with the sole purpose of sending a warning message to Hezbollah: “Israel is following you and is aware of your weaknesses and if necessary will harm you …”

The Statement made by James Jeffrey, U.S. Special Envoy to Syria, in an interview he gave to the newspaper “Asharq Al-Awsat“, published on 2 May; does not leave room to doubt the identity of the source of the airstrikes in Syria at an average of once a week even during the Corona crisis. “The United States supports Israel’s efforts of self-defense and has the right to take the necessary steps against the Iranian presence in Syria… Israel faces an ongoing existential threat from Iran and that Iran’s large presence in Syria and the transfer of weapons to Hezbollah poses a threat to Israel’s security… Israel receives all the assistance it needs to protect itself from the United States and by protecting itself Israel also protects other countries bordering Syria …”

The Corona crisis is indeed a restraining factor safeguarding from a proactive escalation. Nevertheless, the Shi’ite axis against Israel from the perspective of military buildup, with an emphasis on the missile accuracy project and in the context of establishing a terror infrastructure in southwestern Syria, continues at full steam ahead. This is evident by the number of airstrikes carried out throughout Syria as described above. The Corona crisis has not diverted the intelligence and operational attention of the various players in the arena nor has it diminished.

None of the local players has the interest to deteriorate the situation. However, the potential of a flare-up due to the ongoing covert activities of the various players in the arena (i.e. Israel on one hand and the Shiite axis on the other hand), is very high.

[1]  Refers to the targeted covert war campaign waged by the State of Israel. This is accomplished through the IDF and the Israeli Intelligence Community, by preventing Israel’s enemies from developing capabilities that will enable them to violate Israel’s balance of deterrence through detecting and selectively destroying emerging threats to Israel’s security.