Iran – The “Shia axis”: one illustration – one meaning; Who is more important and who is less important? 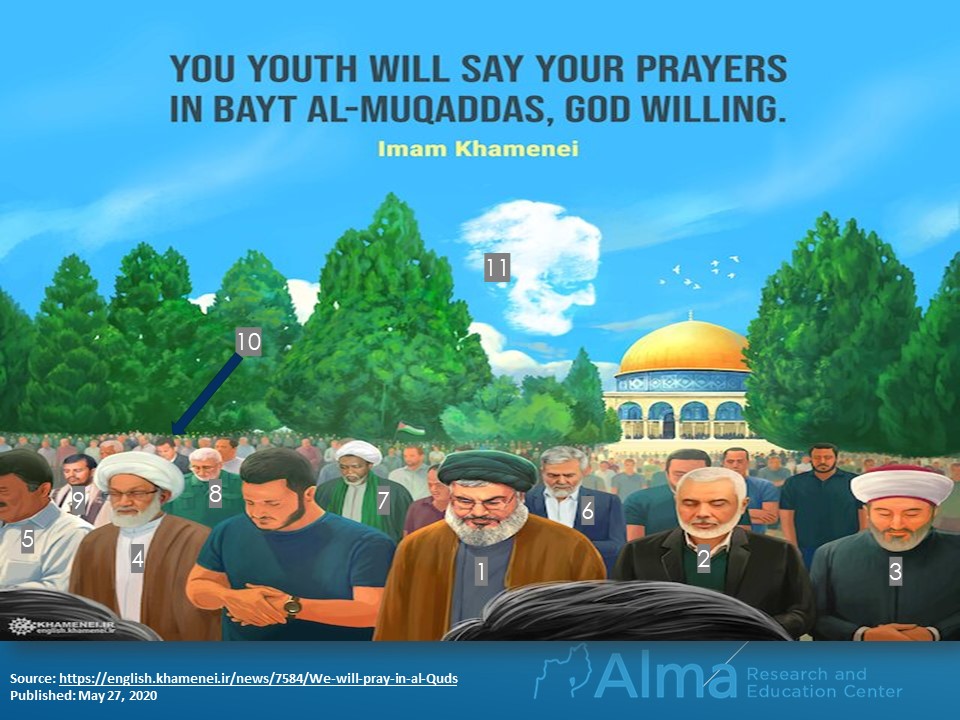 On May 27, in honor of “Jerusalem day”, the Supreme Leader Khamenei’s website posted an illustration of the Al-Aqsa Mosque Square in Jerusalem titled, “We shall pray in Jerusalem”. The illustration shows the images of leaders and outstanding prominent figures who play a major role in the Iranian Shi’ite axis: In front and center of the illustration, in a well-deserved position, as far as the Iranians are concerned, stands Hezbollah Secretary-General Hassan Nasrallah (marked “1”). To his right is the head of the Hamas political bureau, Ismail Haniya (“2”), and next to Haniya is the grand Mufti of Jerusalem, Sheikh Muhammad Ahmad Hussein (“3”). On Nasrallah’s left is the Bahraini Shiite cleric, Isa Qassim (“4”) and next to him is Venezuelan President Nicolás Maduro (“5”) that has become a very close ally of the Iranian regime, which sees Venezuela as a “backyard” for Iranian activity against the U.S.

In the second row, behind them the leader of the Palestinian Islamic Jihad movement Ziyad al-Nakhalah (“6”), Ibrahim Zakzaky – the Islamic Movement leader in Nigeria (“7”), where there is a large prominent Shiite community of Hezbollah activists and Iranians, current Al-Quds Corps Commander Ismail Kani  (“8”) and leader of “Ansar Allah” (the Houthis in Yemen), Abdul-Malik al-Houthi (“9”).

Behind them in the third row is Syrian President Bashar al-Assad (“10”).

Above all the others, the image of Qasem Soleimani (“11”), former Al-Quds commander, killed in the US targeted strike near Baghdad airport in early January 2020, in the shape of a cloud hovering over the dome of Al-Aqsa Mosque.

The illustration sparked widespread debate on social networks, absorbing criticism of the idea behind it and of the characters appearing in it. Giving the impression that Iran is rearranging and updating its allies’ positions in order of importance while the most important is in front and the less important are behind.

Two major issues were debated in the networks. Firstly, the absence of Iran’s other allies from the illustration, specifically, the commanders of the militia, al-Hashd al-Shaabi led by Abu Mahdi al-Muhandis, killed along with Qasem Soleimani. Secondly, was the positioning of Syrian President Bashar al-Assad (back in the third row), sparking a debate about al-Assad’s true status and importance in the eyes of the Iranians.

It is not without reason that al-Assad is located in the third row. Al-Assad is considered a weak submissive and humiliated leader in the eyes of the Iranians, unable to take control of what was going on in his country by himself, desperately needing assistance from foreign powers like the Iranians, their proxies and Russian forces.