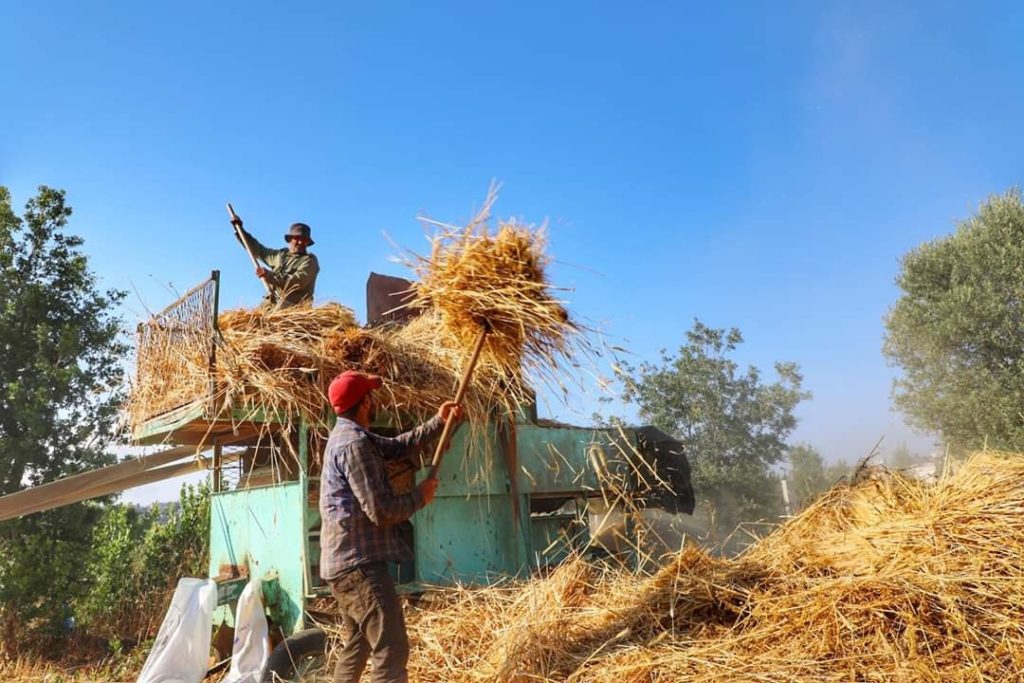 Classical Iranian influence: autarky as a central value in society; “Our fields and grain are the resistance” and “I am a man of resistance, so I am a farmer”… and in adjustment with the present time, the autarky constitutes the response of the Shiite axis to the economic sanctions imposed on it. Beyond the difficulty of the implementation of an agricultural and industrial Jihad, behind it, Hezbollah may have a hidden motive …

Being able to satisfy your own economic needs is a key value of the Iranian concept… maintaining the stance that the Iranians are a single drop in a sea of ​​hostility… This concept also influenced Hezbollah, which sees the farmer, his field, and his crops as the foundation stones for the survival of the persecuted and humiliated Shiite community…

In his speech on July 7, Nasrallah declared agricultural and industrial jihad as a way of dealing with the economic difficulty and as a basic condition for survival and a dignified life.

According to Nasrallah, Hezbollah has decided to fight for agricultural and industrial progress against the threat of collapse and famine in Lebanon. All Hezbollah resources, ties and alliances will be devoted to this purpose. The current situation and the level of the Lebanese economy and livelihood requires everyone’s loyalty and efforts.

Nasrallah added that in the crisis lies opportunity, by turning Lebanon into an agricultural and industrial productive country striving for local Lebanese produce after many years in which Lebanon was a consumer country, importing all its basic needs.

“We must plant wherever possible, on the roofs of the houses and in the courtyards… it is not shameful … the great prophets labored in agriculture … “

Nasrallah’s speech elicited many comments on social networks with both texts and caricatures, pictures, and videos.

In a widespread tagged campaign conducted by Hezbollah supporters in parallel with the Nasrallah speech on 7 July (tagged: #Sayed_Chalenges) and continuing on 8 July as well (tagged: #Agricultural_Jihad), a campaign characterized by us by the enthusiastic responses to Nasrallah’s messages presented in his speech regarding the need to turn to agricultural and productive work. For example: a tweeter by the name of Mustafa Safa ([email protected]) wrote: The date 7/7 symbolizes the Prophet Joseph’s dream interpretation: 7 cows and 7 heads of grain. Thus, anyone who joins contemporary Joseph [Nasrallah] will be saved and whoever joins the prophets of the ritual site in the Aaoukar [the US Embassy location in Beirut] will lose …

Ali Shoaib (Al-Manar correspondent in southern Lebanon) published that Nasrallah’s call for an agricultural and industrial Jihad was not just a popular call, it is a call based on a pre-established strategic plan, and Hezbollah’s resources will be its foundation. Shoaib ​​added that in the coming days the plan and its details will be revealed and with the help of Allah we will celebrate its results in the future…(here).

A man named Muhammad Samaha, who works for the Al Amana petrol station network, declared he would donate 1 acre of land he owns to Chmistar (a Lebanese settlement in the Beqaa valley) towards agriculture…(here).

As part of the campaign in favor of Nasrallah’s declaration, photographs of Shiite Lebanese farmers from the settlement of Ayta al-Shaab in southern Lebanon were also published with the heading “We were where they needed us; we will be wherever they need us …”

For example, a tweeter named @aounist1.0 (suspended) uploaded a photo of a flock of yellow-colored sheep [Hezbollah flag] with the caption “We’ll cross the valley with you!” [A parody of a Hezbollah song called “We will cross the sea with you”]

Another tweet, titled “1998 to 2020 the agricultural project still exists and nothing has changed …”, attached a picture of the headlines of the “Alahed” newspaper from January 1998 with a quote from Nasrallah saying : “An advanced agricultural project is required to halt emigration, and leading to autarky “

The slogan written on the side of the rocket launcher reads: “Dhu al-Faqar [Imam Ali’s sword] cucumber.

The mortar is inscribed with the words: “Dawn of the Apes“[as a parody of operation “Dawn of the ridges”, a military operation against ISIS in the Arsal ridges in the summer of 2017].

The R.P.G toting figure in front is wearing a headband that reads, “We are the traitors” and he is hauling carrots instead of rockets in his pack.

Another photo published on 10 July:

Nadim Gemayel, a Member of Parliament on behalf of Christian Al- Kataeb Party, (The son of Bashir Al- Gemayel,  former Lebanese president assassinated in 1982), responded to Nasrallah’s speech on social media:  “Mr. Hassan, not the East nor the West, neither the North nor the South are willing to help Lebanon with even a single dollar, as long as you insist on controlling the country. If you remove your control over the government, everyone will come! You shut down the manufacturing plants, so before strengthening the agricultural sector, the government should start assisting the existing sectors. Once you lift the siege of your weapons over the country, all economic sectors will return to production… “.

The entire Shi’ite axis aligns with the autarky as an answer to the economic sanctions. On 25 June, the Syrian government released the slogan “Agriculture is the solution”, taking several steps to deal with the American Caesar act. Among the main steps taken is support of the livestock and agricultural sectors. The Syrian regime began taking additional measures such as providing food for livestock and supporting sugar beet cultivation, supporting the production of sunflower oil and the opening of popular markets selling vegetables in order to bring the produce to the consumer at a minimal cost.

Bouthaina Shaaban, the Syrian President’s communications advisor, expressed in recent days that Syria will handle the sanctions and Caesar’s act by returning to agriculture: “We will eat what we sow”.

Hezbollah, too, was quick to show on the ground that it was working to fulfill Nasrallah’s new narrative. Under its sponsorships, farmers were invited to offer their produce for sale in the “agricultural market” in the town of Albohsasa (southern Lebanon) on 11 July.

Is there an ulterior motive behind Nasrallah’s call for an agricultural and industrial Jihad?

From our knowledge of Hezbollah’s methods of operation, we know that Hezbollah is currently using its agricultural and industrial infrastructures extensively for its military needs. Agricultural fields serve as a place to hide camouflaged rocket launchers, chicken coops serve as observation points, factories are utilized as exit points to dig some of the attack tunnels against Israel and industrial zones serve Hezbollah as designated missile launching sites. All these enveloped under the human shield tactic. Further development of this infrastructure will further strengthen the potential of its military use.

In our estimation, both Lebanon and Syria will find it difficult to implement the new Jihad. Land and industry cannot be cultivated and developed on enthusiasm alone, appropriate infrastructure and relevant skill are needed. The difficulty stems mainly from ongoing neglect over the years.

The difficulties stem mainly from the ability to pump irrigation water, transferring water to the fields, Illegal construction on agricultural land, soil contamination, random well excavations that caused springs used in the past to dry up, lack of suitable seeds and saplings and the lack of a proper marketing chain infrastructure for the agricultural produce.

The development of the industry will also face difficulties arising mainly from a lack of professional knowledge. The importing of professional knowledge, mainly from the West, is effectively blocked as a result of the economic sanctions imposed on the Shiite axis. It is for this reason the Shiite axis is looking east to Russia and China, hoping their salvation will come from there …