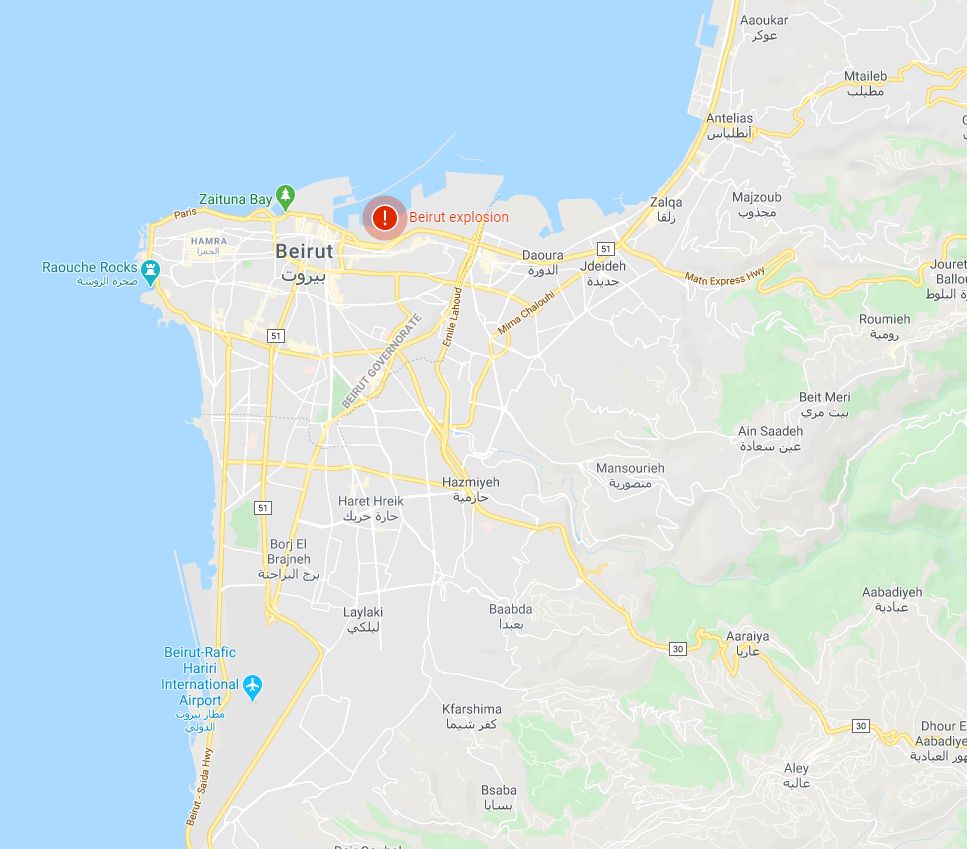 On August 4th, 2020 at around 6:00 pm Lebanon huge explosion occurred in the naval port of Beirut, located in the northwestern part of the city, near Sunni and Christian population centers.

The carnage the explosion left in its wake is devastating – approximately 158 casualties, 20 missing and 6,000 injured, not to mention entire roads completely decimated, even in a several kilometer-wide- radius, leaving over 250,000 homeless. Apparently, many squares and suburbs, in which residents of all ethnicities and religions live, were damaged. However, the southern suburb, home to the highest concentration of Shiites in Beirut, was damaged in the relatively lightest way, considering it is physically distant from the explosion’s epicenter.
The Governor of the Beirut District mentioned that hundreds of thousands of citizens will be able to return to their homes only in 2 or 3 months-time because of the amount of damage that was caused. The economic damage estimated at this time is between 5-15 billion dollars. The city of Beirut was declared a disaster-struck city and a state of emergency has been put into effect for a period of 2 weeks.
The explosion is considered a massive human and environmental disaster.
Official reports point to 2 main causes of the explosion: the first being highly explosive materials that were confiscated several years ago and were stored in the port of Beirut, and the second being approximately 3000 tons of ammonium nitrate that was stored in the port 6 years ago and was not handled accordingly.

From watching the videos of the explosion and analyzing them from different angles, we can see that in the beginning there was a fire and a lot of smoke, followed by smaller explosions (a common phenomenon that occurs when ammunition burns). Afterward came the big explosion. Its huge white mushroom is evidence of a heatwave with a temperature of thousands of degrees that can be caused by the explosion of these materials. The explosion’s magnitude was similar to that of a tactical nuclear bomb.

The state of mind in the camp opposing Hezbollah is that Hezbollah is to blame for the explosion, because Hezbollah stored “forbidden materials”, including weapons and weapon parts, in the port. Immediately after the explosions, Hezbollah released a public statement, stating “the severe incident and the unprecedented damage it caused obligate all the Lebanese people to unify and work together…”.  Lebanon’s Minister of Health, a member of Hezbollah, released a public statement, saying: “Our allying countries are now put to the test…” and added that “we need to put politics aside and not point fingers at anyone, saying that they are the ones behind the explosion…”
In practice, the port of Beirut is under Hezbollah’s control. There is nothing that happens in the port (just as in the airport named after Rafic Hariri) that Hezbollah does not know about and authorize. Hezbollah controls the port with various officials, several of them supporters of Hezbollah and serve as its emissaries in the port, and several of them are paid by Hezbollah for their collaboration with it. In addition, Hezbollah physically controls areas with restricted access in the port.

At this time, it is not clear what the explosion’s trigger was, but it is highly likely that Hezbollah is responsible, knowing the fact that Hezbollah stores various short- and long-range weapons in the port’s storage rooms. According to Ashraf Rifi, general director of the Lebanese Internal Security Forces from 2005-2013 (and afterwards served as Minister of Justice and today is a parliament member of Saad al-Hariri’s party), the storage room at the place of the explosion belongs to Hezbollah. His former duty as general director of the Lebanese Internal Security Forces made him intimately familiar with Hezbollah’s activities.
Immediately after the explosion, Hezbollah sealed off the area of the explosion. Was Hezbollah hiding something?
Islamic Health Organization forces rushed to the site of the explosion. We assume their objective was to aid the formal search and rescue teams. However, it is known that Hezbollah uses the organization’s ambulances and other vehicles to secretly transfer weapons from place to place. Our assumption is that their first goal was to help extract Hezbollah’s weapons and equipment from the port and transfer them to safe haven, and only after that they will be free to assist in the search and rescue efforts.

Unverified reports state that search and rescue teams sent by Western countries that arrived at the scene were directed to other areas away from the main site and were therefore prevented from entering it.

In our estimation, the explosion creates opportunities for Hezbollah and its Iranian patron, enabling them to act and strengthen their interests in Lebanon. Hezbollah will use and demonstrate its capabilities in rehabilitating and handling the incident, in a much more efficient manner than the official Lebanese government, all of this with Iranian assistance of course. Also, money will start (and has already started) flowing into Lebanon. The money will arrive in cash in suitcases, from Lebanese living abroad, and from Western countries as well. Because of Hezbollah’s political and sectoral influence and dominance, we believe most of the money will fall under Hezbollah’s control and Hezbollah may use it according to its own interests and not necessarily according to the interests of the Lebanese state.
While it is possible to build supervising systems and try to see where the money will go to, we assume that they will be limited in their capabilities and will be by-passable.

Humanitarian aid is a huge opportunity for Iran. Now, the Shiite Axis ground corridor and the air routes will be open and almost completely unsupervised. Aside from humanitarian aid, Iran can also send military aid and weapons that Iran has so far found exceedingly difficult to transfer!

The Iranian planes bringing “humanitarian aid” have already landed in Beirut. Will the Iranians restrain themselves and not use the planes to transfer weapons to Hezbollah? While we have a hard time believing so, this is not to say that humanitarian aid should not be given to Lebanon. After all, this is a humanitarian matter, which takes precedence over everything else. However, it should be given under supervision.
In our estimation, in light of the circumstances, supervision and prevention of the arrival of weapons under the disguise of humanitarian aid will be very limited, even with precise intelligence. After all, it will be very difficult to explain the attacking and damaging a “humanitarian aid convoy” that was on its way to Lebanon in its time of need following the terrible disaster that befell it.

Hezbollah suffered a major blow – most likely its assets were destroyed inside the destroyed port. As it is known, part of Hezbollah’s revenue is based on cutting economic coupons from land, air, and sea crossings in and out of Lebanon (sponsorship fees, etc.). Does the explosion’s effect have the potential to undermine and limit Hezbollah’s widespread use of human shield tactics? Will the explosion affect the civilian population which knows that Hezbollah uses it as a “human shield” for its activities? There is no doubt that the explosion will increase the potential for resisting Hezbollah’s tactics, but at this stage, it is not clear to what extent.

Syria, a vital country when it comes to the Shiite ground axis, was also damaged by the devastation in the port of Beirut. Until the explosion, the port of Beirut was a way to bypass international sanctions placed on Syria. The Syrian regime succeeded, thanks to Hezbollah’s control of the port, to import equipment and merchandise via Lebanese companies. These were transferred to Syria from the port in Beirut by land under Hezbollah’s wing (who of course took commission from…). Considering the circumstances, this roundabout way is no longer relevant at the moment.

Many in Lebanon express their disbelief in the local investigation of the explosion, and there are increasing calls for an investigation to be conducted by an international organization, that is not bent on finding a scapegoat, but will rather unearth the truth. As time passes, Hezbollah, who controls the port of Beirut, will need to provide answers; a local investigation conducted under Hezbollah’s shadow will not be a true investigation. Hezbollah is already threatening those who call for an international investigation.
A short time after the explosion, authorities began arresting various officials at the port. It appears these arrests were communicated to the media to soothe the atmosphere, several of those arrested being scapegoats.

Hezbollah is currently focusing on 2 main tasks: the first being the aid of civilians in Beirut, especially the Shiites. The second is damage control of the military array and weapons (especially missiles) scattered around Beirut. Hezbollah wants to maintain its status among its supporters and prove it is still strong and able to maintain its deterrence with Israel, and not weak as its enemies claim it is. Therefore, Hezbollah will not “forget” about the retaliation, and we assess it will do so after completing its two aforementioned tasks at hand.

As of now, Israel is not being blamed, and it is clear to everyone, including Hezbollah, that Israel is not connected to the explosion.Even so, there are voices that blame Israel, although they were very insignificant and were quickly silenced. Israel publicly denied any and all involvement, and even expressed its willingness to send any aid Lebanon will need.

On August 7th, Hezbollah held an address following the explosion. The address was characterized by two main narratives regarding Hezbollah’s involvement: Denial and pretending innocence. In his address, Nasrallah comprehensively denied Hezbollah’s control of weapons in the port of Beirut, and that Hezbollah runs the port in practice. Likewise, Nasrallah spoke about the subject of the investigation committee, stating that it needs to be internal and not international, and that the LAF can run it (more on Nasrallah’s address and our insights on it, see a separate article we published). It is unnecessary to mention that Hezbollah wants to control the investigation, and that international involvement will prevent it from doing so.

Security forces used physical force to gain control of the demonstrations, including firing tear gas and live ammunition (we will publish a separate article that broaches and analyzes these demonstrations as soon as possible).

As of now, because of the explosion, 4 government ministers have resigned (Minister of Justice, minister of Defense, Minister of Environmental Protection and Minister of Advocacy), as well as 8 parliament members. There are unverified sources claiming that Hassan Diab, Prime Minister of Lebanon, intends to do so as well.

If at first Hezbollah displayed solidarity, Nasrallah even stating in his address on August 7th that “I do not want to confront anyone, and today people need solidarity, support and affection, and tomorrow we will talk about politics…”, Hezbollah’s “spirit of solidarity” changed at the outbreak of the demonstrations and began threatening the demonstrators. As usual, it seems as though Hezbollah is trying to point fingers outside and to blame these people for plotting internationally against it.

Our assessment is that the basis for the support of supporters of Hezbollah, most of them Shiite, remains strong and that there is no fear of it being undermined. We estimate that Hezbollah’s status in Lebanon has not weakened and that there is no change to its support’s balance. Those who opposed and those who supported Hezbollah remain so. The camp of the opposition well knows Hezbollah’s power, and despite the “war spirit” of the demonstrations over the past few days,  the probability of a civil war is extremely unlikely, because a civil war will offer Hezbollah the chance to take complete control of the country.