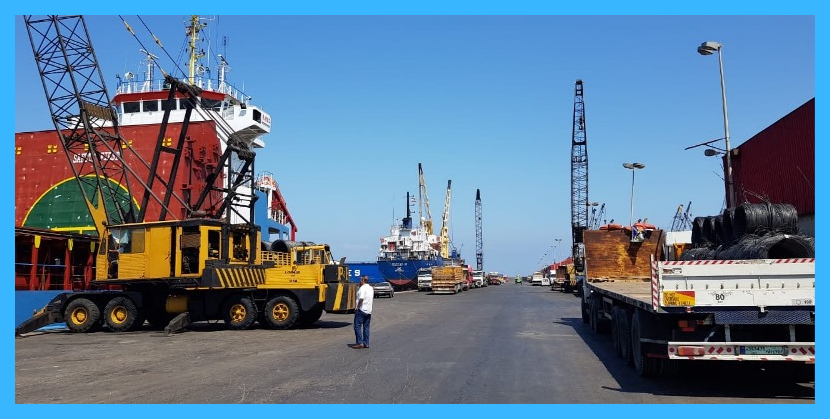 Lebanon – The Blast in Beirut Port left Lebanon with seaports as “replacements” that are limited in their capabilities in maintaining sea commerce:

The blast in Beirut Port on August 4th severely damaged the central seaport of Lebanon. Beirut Port, which takes up an area of 1,200,000 square meters (about 300 acres), housed 4 shipyards, 16 cranes, and a modern container terminal. 70 percent of Lebanon’s commerce went through Beirut Port. Every year the port services approximately 3000 ships, and 8 million tons of merchandise pass through it. The silo and its contents that was located adjacent to the epicenter of the blast and that was destroyed in it, contained 120,000 tons of grain.

Today, after the blast, Lebanon’s ports have difficulty in substituting Beirut Port and entirely supporting Lebanon’s sea-commerce activity. Over the years, most of the Lebanese government’s plans for establishing and developing additional ports remained “on paper” and were not implemented.

In 2008, Muhammad Sefadi, Lebanon’s former Minister of Labor and Transportation, announced a plan for the establishment of ports along Lebanon’s coast. In 2019, former minister Youssef Fenianos added the necessity of integration: coordinating and integrating with the large ports’ activities and adopting a unified policy for sea transportation. The plans for developing Lebanon’s ports, that as aforementioned were not implemented, included the development of Beirut Port, the completion of Tripoli Port, the development of the ports of Sidon and Tyre for tourism purposes, the establishment of a “transit” port in Naqoura (a port in which the merchandise that arrives is not designated for that country, but rather is transferred to a different one – some of the transit goods that arrived in Beirut Port were designated for Syria, used in the roundabout way to bypass international sanctions), and leaving Aadloun Port for fishermen only because of the limitations of its area.

The difficulty in the continuous functioning of Lebanon’s sea commerce as a result of the blast in Beirut Port can be demonstrated with 3 ports – Tripoli Port, Sidon Port, and Tyre Port.

On August 5th, the day after the blast, the Lebanese government recommended the preparation and completion of Tripoli Port, intending to make it Lebanon’s central port until Beirut Port will be restored. Theoretically, Tripoli Port is capable of handling about 7 million tons of merchandise a year if it operates at full capacity. However, it suffers from neglect of its infrastructure and the non-application of its development plans, and is considered less advanced than Beirut Port, and therefore will have difficulty dealing with possible overload on its docks.

In contrast to Beirut Port, Tripoli Port does not have grain storage capabilities, forcing grain to be transported several kilometers in order to be stored outside the port.

As part of the inter-port integration plan, the new Sidon Port received the first 2 ships that were redirected from Beirut Port, in an attempt to bridge the gap in the continuous management of ship movement in Lebanon. The first ship, flying the Russian flag, arrived from Tanzania with 4000 tons of grain, and the second ship, flying the Honduras flag, arrived from Croatia with 7500 tons of grain.

The renovation of Sidon Port was not entirely completed. In the meantime, the new part of the port that had managed to undergo renovation before the blast in Beirut is capable of receiving medium-size ships in the 10-meter-deep basin adjacent to a 275-meter-long platform. If there will be additional funding, the next stage of renovation will include new platforms, additional areas for the port and logistical centers to service the ships.

The old area of Sidon Port has shallow water (6 meters deep) and can only receive small ships.

Tyre Port’s area, which was not developed and upgraded for many years, is about 18,000 square meters (4.5 acres). It houses only 2 operational platforms for only 2 ships simultaneously. One of the platforms is 15 meters long and 7 meters deep, and the second one is 40 meters long and 6 meters deep. Both platforms can receive only small and medium-sized ships, that normally import vehicles from Europe and a limited quantity of grain from different countries. Tyre Port only has one crane for unloading merchandise but does not have any hangars or warehouses for storing it.

Over the past few years, nature has hit Tyre Port many times, especially in the winter season, and financial resources were not redirected for its maintenance. As a result, authorities were forced to occasionally close the port to ships.

Until now, ships have not been redirected from Beirut Port to Tyre Port, and a procedure of authorizations is required in order to ensure the port will be capable of receiving medium-sized ships.

The blast in Beirut Port points at an additional failure in the development of infrastructure in Lebanon, Beirut Port’s closing left Lebanon with limited continuous functionality of its sea commerce. The ports in Lebanon that are operational have neglected or inadequate infrastructure that limits their ability to receive the necessary amount of ships in day-to-day life and their ability to store merchandise.