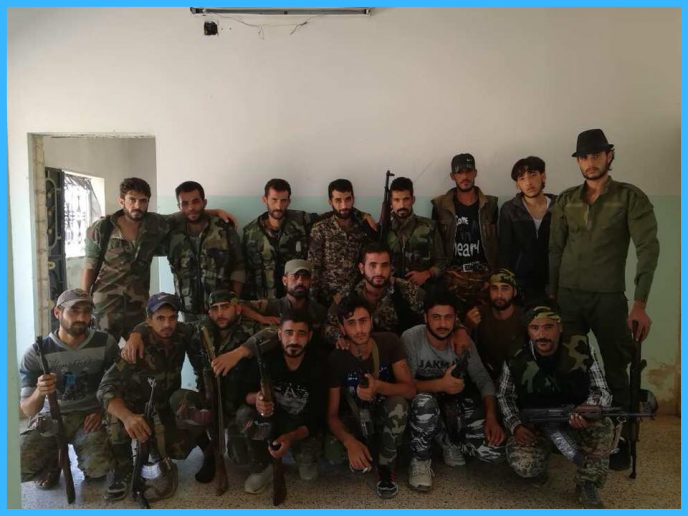 Southern Syria: Who is the Russian proxy operating in the region and will it be able to keep the Iranians and the forces associated with them away from the Israeli border?

The Russian proxy in southern Syria has limited power and has yet to face powerful forces identified with Iran and Hezbollah. In addition, the Russian proxy will find it difficult to impose its authority on the rest of the “locals” living in the area.

The intentions to create a “Russian security zone” in southern Syria near the border with Israel and to remove Iranian presence and its proxy forces are far from implementation and from reality.

According to the article by Dr. Yossi Mansharof (researcher of Iran and Shiite political Islam and research fellow at the Alma Center), published by us on August 12, 2020, (Iran in Syria – the Growing Rivalry with Russia and the Continuation of the Establishment Strategy in the Shadow of the Economic Crisis and the Corona Virus), It seems that in addition to Russia’s opposition to the Iranian expansion plan in Syria in general, it also disapproves of Iran’s military establishment strategy in Syria in particular. One of the main reasons for this is due to the Iranian basing strategy that entails significant military tension with Israel. This tension distances any possibility of starting to rehabilitate the infrastructures in Syria, which is a key Russian interest. In previous years, Russia has cooperated with Iran’s efforts to establish itself in Syria, in light of the common desire to defeat Assad’s opponents. Now, since success in the war has been reached, it is clear that the growing rivalry between Tehran and Moscow in Syria is growing.

In the shadow of this rivalry, power struggles and exchanges of fire continue between Russian affiliated forces and forces affiliated with Iran. These violent incidents, which reflect Russia’s desire to increase its influence in the country at the expense of Iran, are also taking place in the southern Syrian region, near the border with Israel.

In early July 2020, clashes began in southern Syria (Daraa province) between Ahmed al-Awda’s forces belonging to the 5th. Corps, which serves as a Russian proxy and Syrian forces from the “Air Force Intelligence Directorate” which is affiliated with the Iranians.

The “Air Force Intelligence Directorate” is a key security intelligence agency in Syria one of the four existing intelligence agencies in Syria (in addition there is the “Military Intelligence Directorate”, the “General Intelligence Directorate” and the “Political Security Directorate”). Each of the above agencies are independent and formally subordinated directly to the President. With the arrival of the Iranians and Russians into Syria, each side “grabbed” an agency, thus, the “Air Force Intelligence Directorate” became under Iranian patronage.The 5th. Corps was established in late 2016, with the escalation of Russian military intervention in Syria and is the main Russian proxy militia made up of Assad regime’s forces. Russia controls virtually everything that goes on in this militia: commanders, funding and moves. The 5th. Corpsincludes brigades composed of remnants of the regime’s militias (such as the al Baath Brigade and the Tzkur al-Tzahra’a Brigade) They were joined by fighters of the “settlement”, who are former opposition activists who chose to reach reconciliation agreements with the Syrian regime who wished to remain in their  areas of origin and livelihood. (See our article on the 5th. Corps)

Russia has given the 5th. Corpsin southern Syria extensive powers to maintain security in its areas of control, to prevent any other force from infiltrating them – including regime forces. In doing so, Russia is trying to hold a large military force under its control in the region, in part to limit Iranian intrusion into that region. Russia feared that Iran would succeed in recruiting the “settlement” operatives and therefore established the wing belonging to the 5th. Corpsin the Daraa province.

Adjacent to the town of Ghabaghib in the Daraa province is one of the largest camps of the 5th. Corps in Syria. In this camp, the soldiers and officers of the Corps practice shooting and firing tanks, machine guns, Cornet missiles and rocket launchers. Following the settlement agreements in Daraa district in the summer of 2018, the district area was divided between the various power factors, the 5th. Corps established its center in the city of Busra al-Sham controlling the entire eastern periphery of Daraa.The main capability on which the 5th. Corps relies on in the Daraa district is based on the force, which is under the command of Ahmed al-Awda. Born in the city of Busra al-Sham, to a family of seven children. al-Awda is a graduate of the Faculty of Humanities in the Department of English Literature. He completed his military service in the Syrian army and later served in the police academy in the Qaboun neighborhood in Damascus. He began his career as a combatant in the opposition to the Syrian regime, losing three of his brothers in the war.

He was previously an ally of the Jabhat al-Nusra and the Al-Mathna al-Islamiya movement, which in 2015 expelled Syrian army forces from their hometown of Busra al-Sham. Later he set out against them, ousting them from the city. al-Awda worked to organize the vital and public services in the city, setting up a police force including a traffic police.

In 2016 against the backdrop of a power struggles within his own faction, al-Awda fled Busra al-Sham, then while winning the support of the “Southern Front” factions, he regained control of the city.

In 2017 there were further clashes between rival factions in the region and in mid-2018 the Syrian regime regained control of the al-Lajat area and Busra al-Harir. Following this takeover, Russian-sponsored negotiations were held in the city of Busra al-Sham. The regime regained control of the entire region, with the exception of this city, which served as al-Awda’s center. After the Syrian regime arrived in Busra al-Sham, the reconciliation agreements led by al-Awda were signed, stipulating that the locals recognize the Syrian regime’s re-takeover of southern Syria. As part of the settlement and reconciliation, al-Awda handed over his heavy weapons joining the 5th. Corps that is directly subordinate to the Russians. He was then appointed commander of the Corps in the southern region and in gratitude, he sent combatants to assist the Syrian regime in the fighting against the rebels in northern Syria in the Idlib and Aleppo provinces.

In March 2020, during fighting, that broke out between the Syrian army and the residents of al Sanamayn who refused to settle and reconcile, al-Awda intervened and managed to impose a ceasefire that ended in the deportation of some of the armed conscientious objectors, to northern Syria / Idlib province while bartering a settlement with the rest.

Al- Awda submitted a proposal to members of the Central Committee in Daraa, suggesting to recruit youngsters who did not report for compulsory service in the Syrian army or those that had defected from it. As part of the proposal, al- Awda claimed that the Russians had authorized him to command an independent brigade in the corps, which would appoint 3,000-5,000 fighters to be called the “Horan Army.”

The clashes in early July 2020 between Ahmad al-Awda’s forces belonging to the 5th.Corps and forces from the “Air Force Intelligence Directorate” opened a window revealing the power and influence struggles between Russia and Iran in southern Syria:

During the clashes, military positions of the “Air Force Intelligence Directorate”were overrun and occupied by the 5th. Corps forces under Ahmad al-Awda’s command. The clashes caused casualties on both sides. During the funerals of the 5th. Corps fatalities in the communities of Saida and Kiheel, commercial strikes took place while pictures of President Assad were torn off billboards.

According to Al-Arabiya (30 July) Russia and its forces (the 5th.  Corps) exerted heavy pressure in the Daraa province causing a decrease in the Iranian loyalist’s presence including in the Quintiera district near the border with Israel.

The Russians prevented the forces loyal to Iran from settling in new locations and set up blockades that prevented a continuum of presence of these forces.

On July 28, a graduation ceremony was held for about 1,000 of al-Awda’s men belonging to the 5th. Corps. The ceremony took place in the town of Busra al-Sham and was a show of strength for the forces of Ahmad al-Awda. During the ceremony, participants sang songs against the Syrian regime, against Bashar al-Assad and for free Syria:

In the spirit of these days with the establishment of normalization between Israel and the United Arab Emirates, we found it appropriate to mention another detail about Ahmad al-Awda. In the past, al-Awda worked in the United Arab Emirates. Later, during his time as leader of a rebel faction in southern Syria during the civil war, it was alleged that al-Awda was in contact with UAE intelligence services and was even received funding from them. We do not know if al-Awda is still in touch with the UAE. If the connection still exists, is there an opportunity here for Israeli influence (through the United Arab Emirates) on a local power factor operating in the area near its border? Time will tell…

It seems that at this point the Russian proxy under the command of Ahmad al- Awda has been confronted with only secondary forces. Its true power and ability to limit Iran’s influence in southern Syria of keeping the forces associated with Iran with an emphasis on Shiite militias and Hezbollah away is still unknown.

It is possible that the Russians are working to achieve all three of these goals simultaneously. In our opinion, the publications about the creation of a “Russian security zone” near the Israeli border and the removal of the Iranians and their proxy forces are at this stage far from the existing reality on the ground.

Ahmad al- Awda’s force is indeed considered a relatively large force. However, it is still a local force belonging to the eastern part of Daraa district. From our familiarity of the civic fabric of southern Syria, which is based on large and cohesive families, each from their own origin, and each living in their own villages, it will be very difficult, almost impossible, for Ahmad al- Awda’s people to impose their influence on these families living in the other parts of Daraa province in general and in the Quneitra province in particular.

The term “local” in southern Syria has enormous significance. The “local” is the one who determines and decides where he lives and therefore will have a very hard time accepting authority from an outside source. Ahmad al-Awda’s forces will find it very difficult to receive assistance from these families, even though there is a common interest, i.e. the removal of all foreign forces residing in their area of ​​residence – in southern Syria.