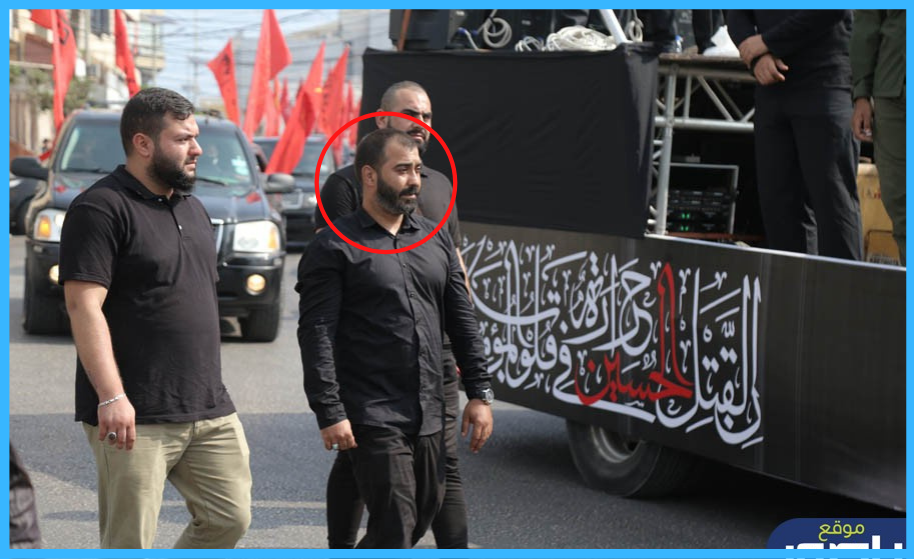 Despite the COVID19 restrictions, the Shiites in south Lebanon insisted on commemorating the Ashura holiday with parades, ceremonies and assemblies. The events commemorating Ashura (you can read “5 facts about Ashura” on our website) teach us about several characteristics, several of which you might already know from previous years, but are still enthralling.

“Everyone is going out to see and be seen” (including low and high-ranking Hezbollah operatives that “gave up” their covert activity): As can be seen in the mass event Hezbollah organized in Tyre on August 30th: A procession of cars and trucks with display stages left the “Imam Hussein” complex and drove around the city waving Ashura flags. Simultaneously, there was a similar procession of boats across from Tyre’s coast.

Amongst the crowd, that included many Shiite men, women and children, many Hezbollah operatives were seen. We assess that several operatives are high in rank (Marked with a red circle), according to their external features such as age, escorts by others (guards?), etc.

The combination of narratives that serve Hezbollah’s image and its military and civilian work:

The Narrative for Dealing with the COVID19:

As a result of the COVI19 pandemic in Lebanon, Hezbollah deploys its independent civilian medical wing, the “Islamic Health Organization” (whose operatives are seen wearing the IHO’s symbol), to help with the Shiite group of the sector, at the expense of the Lebanese nation. It is important to remember that Hezbollah’s “civilian wing” is only allegedly so. It assists Hezbollah’s military wing day-to-day and in times of emergency and plays an important part in the “human shield” tactic, by being used by Hezbollah to conceal military activity (for example: transferring weapons in ambulances…). You can read more about the Islamic Health Organization and its activity in the COVID19 era in our article.

Displays of power and symbolic provocation of Israel: During the 10 days of Ashura, one of Hezbollah’s customs is arranging processions of vehicles that drive along the border with Israel, waving flags and slogans protesting Israel.
In the images below you can see the Ashura procession that left the Town of El Khiam to Kafr Kila and arrived at the “Fatma Gate” that is near the Israeli community Metula, and held a ceremony in which the Himam Hussein flag was raised near the concrete wall. (http://khiyam.com/news/article.php?articleID=36383)

In the following video, you can see a ceremony held by Hezbollah scouts (“al Mahdi” scouts) in which they raise the Ashura flag in the town Hula, across from an IDF base on the border with Israel. The scouts are wearing the scout uniform with the scout symbol “al Mahdi” (Hezbollah scouts are members of the World Organization of the Scout Movement…), and the Lebanese flag is on one side and Imam Khomeini (founder of the Islamic Republic of Iran) on the other… (Hezbollah’s dual loyalty: to Lebanon on one hand and to the Shiite Islamic Republic and Iran on the other…).

Other ethnic groups’ expressions of empathy and honoring of the Shiite custom: Empathy for the Shiites expresses itself in hanging Ashura symbols, participation in conventions and parades, as well as posting words of support on social media. Despite this, these phenomena are not very common, even though they occur every year.

It should be noted that there are many opposite cases as well, in which Shiites bring in Christmas trees into their homes, or Christian symbols are placed in Shiite areas. This is all part of Hezbollah’s narrative, Hezbollah being an organization of ALL the people of Lebanon:

During the days of this year’s Ashura, we identified several phenomena and characteristics, some of them indeed known from previous years, but all of them certainly very interesting.

The first is “everyone is going out to see and be seen” including low and high-ranking Hezbollah operatives that ‘gave up’ their covert activity”, the second is “the combination of narratives that serve Hezbollah’s image and its military and civilian work”.  The third being “connecting the religious mourning of Ashura with the ‘National Lebanese Mourning’ in commemoration of the martyrs of the ‘Resistance'”. The fourth one is “displays of power and symbolic provocation of Israel. Lastly, other ethnic groups’ expressions of empathy and honoring of the Shiite custom.

Hezbollah succeeded in turning Ashura into a national holiday of sorts that is a key stage in the process of Shiitization that Hezbollah wants to implement in Lebanon.