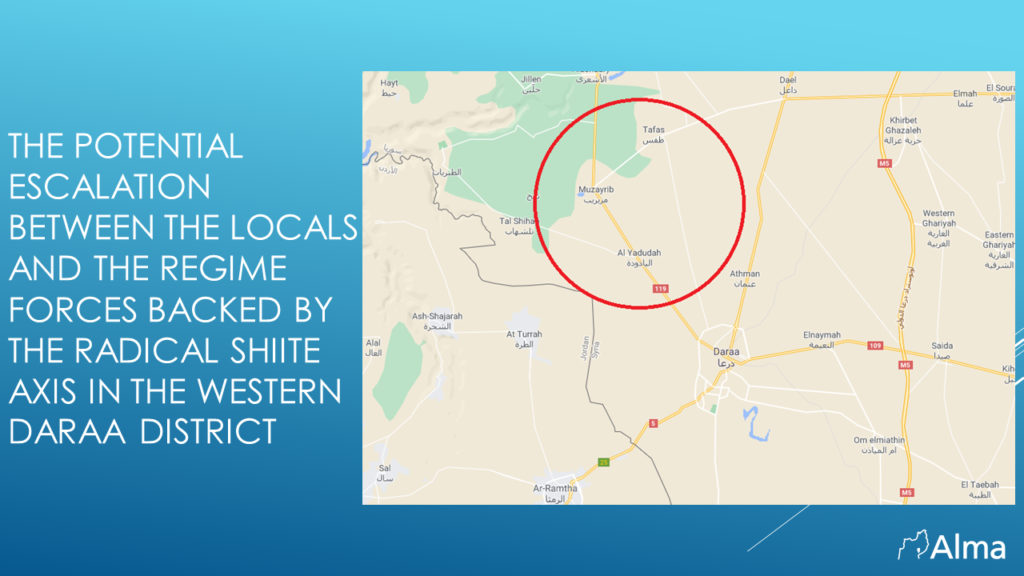 Over the past two weeks, tensions seem to be developing between Syrian regime forces backed by the radical Shiite axis and locals in the Tafas area on the western outskirts of Daraa.

Residents of the town of Tafas, located northwest of the city of Daraa, received a demand from the Syrian regime to deport several young people to the north of the country to Idlib province. These young people are members of local militias who sometimes confront regime forces.

The regime threatened to break into Tafas by Division 4 forces, in case the young locals were not deported. It should be noted that Division 4 is an independent force for special missions under the command of the president’s brother, Maher al-Assad. The division is currently operating in southern Syria in the Daraa province in light of the instability in the region. However, the residents, backed by Ahmed al-Awda, commander of the 8th Brigade in the 5th Corps (a military force used as a Russian proxy), rejected the regime’s threats.

In response to regime threats, on January 29 local militias attacked checkpoints and positions of regime forces throughout the Daraa district. The attacks were carried out mainly against Division 4 forces and Air Force security forces. Both Division 4 and Air Force Security are affiliated and operate in close cooperation with the radical Shiite axis headed by Iran.

In recent days, there have been indications of a concentration of Division 4 forces On route 119 between Al Yadudah and Muzayrib, located northwest of the city of Daraa and south of the locality of Tafas. Among other things, the forces are engaged in earthworks for fortifications. These forces also include activists from the Fatemiyoun Shiite militia, which operates in Syria as a proxy of the radical Shiite axis led by Iran.

Additional indications that we have identified indicate preliminary meetings of 1st Corps + 4th Division + Hezbollah + Iranian representatives on the subject of “opposition to the regime” in Daraa province. Daraa province is considered by the radical Shiite axis led by Iran as a strategic area and the governmental instability in it greatly bothers the Axis elements.

In the meantime, it is possible that a Russian-brokered deal is being reached to prevent a flare-up. On the one hand, the regime will not launch a military attack on a climbing area, no local deportation to Idlib will be carried out and locals arrested by the regime will be released.

On the other hand, the regime will be able to conduct patrols in a climbing area accompanied by the locals and will be handed over weapons and several government buildings that the locals have taken over.

Here are the main key players in south Syria currently: