The Shi’ite Centers In France: A Potential Platform For Terrorist Activity On European Soil 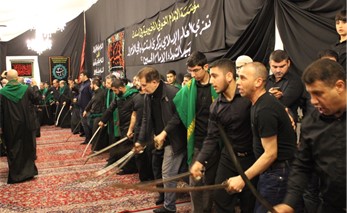 The Shi’ite Cultural and Social Religious Centers in France: The Relationship to Terrorism and the Dissemination of the Dangerous Ideology of the Radical Shiite Axis Led by Iran.

The radical Shiite axis, led by Iran, strives to create, wherever it operates, an active civilian and military integrated infrastructure. The civilian infrastructures that the axis cultivates and establishes throughout its areas of operation form the basis for the freedom of its military and terrorist activity.

The Shiite centers of culture and social societies in France – produce a communal influence under the guidance of the radical Shiite axis led by Iran. Moreover, some of them may create a potential platform for terrorist activity on European soil.

On June 30, 2018, two civilians were arrested in Brussels, with 500 grams of TATP (triacetone triperoxide explosives) in their vehicle. In the course of their investigation, they admitted that the explosives were given to them in Luxembourg by Assadollah Assadi – a diplomat at the Iranian embassy in Vienna.

The target of the planned attack was a conference of the Iranian opposition (Mujahedeen of the Iranian People – PMOI/MEK) that was to take place in the town of Villepinte in France. Three suspects were arrested in connection with the attempted attack in a raid on the “Al Zahara Center” Association in France. Two out of the three suspects were released due to lack of sufficient evidence, the third suspect was being investigated for conspiracy, aiding, and abetting terrorist activity.

The “Al Zahra Center” Grande-Synthe was established in 2005 by Yahia Gouasmi, Sheikh Jamal Tahiri, and Khaled ‘Abd al-Karim, apparently operating as a logistics center for planning and carrying out terrorist attacks on European soil.

On October 2, 2018, the French police raided the “Al-Zahra Center “Grande-Synthe, where “France Marianne Télé” and the “Shia Federation of France”, also operate. The reason for the raid was the association’s involvement in terrorist activities and connection to the attempted attack on the Iranian opposition conference in Villepinte. Illegal weapons were discovered in the raid, leading to the sentencing of Gouasmi’s son, who served as the association’s treasurer, to some 18 months in prison for possession of illegal weapons. 11 people linked to the center were arrested on suspicion of operating Iranian terrorist cells on France and European soil.

The “Al- Zahara” Association was temporarily closed for six months. In March 2019, following a directive from the French Interior Ministry, it was decided to close the association’s center as well as all other associations there, due to incitement and encouragement of terrorist activity.

Sheikh Jamal Tahiri was arrested and sentenced to six months’ probation and a fine of thousands of euros for encouraging terrorism following anti-Semitic posts he published on the association’s page.

On September 16, 2020, Gouasmi, Sheikh Tahiri, and two other former directors of the association were arrested on suspicion of continuing to engage in incitement activities online on behalf of the association, despite the institution’s closure and the freezing of its funds.

On October 10, 2020, a court in Belgium ruled that the planned attack in Villepinte was planned by Iran. The main defendant, Assadollah Assadi, served as a diplomat in Iraq from 2003-2008. In 2014 he was appointed to a diplomatic post at the Iranian Embassy in Vienna.

According to the US State Department, he was part of unit “312” of the Iranian Intelligence Services, which is classified as a terrorist organization in the European Union. His training involved learning to build and operate explosives. In addition to his explosive training, his duties involved the monitoring of Iranian opposition activity in Europe.

The trial regarding the attempted attack on Villepinte began on November 27, 2020, in Antwerp.

The Iranian “diplomat” (Assadi) accused of planning and recruiting agents in Europe to carry out the attack refused to appear in court. Iran has also announced it would not accept any verdict regarding the “diplomat”.

On February 4, 2021, a court in Belgium revoked Assadi’s immunity, convicted him of organizing an attempted attack against an Iranian opposition conference, and sentenced him, in absentia, to 20 years in prison.

The trial of the four directors of the “Al- Zahara” Association also began in November 2020. On January 27, 2021, the French court decided to release them…

These days we are writing a special report That deals with two major organizations operating around the world via branches, who also have an active branch in France: the first is the Al-Ghadir Islamic association (جمعية الغدير الإسلامية) the second is a charitable association institution named after the Imam Al Khoei (جمعية الإمام الخوئي ).

The purpose of the report is to examine whether the two French branches are part of a worldwide association designed to spread the dangerous ideology of the radical Shi’ite axis led by Iran to youngsters and adults alike.

We also intend to examine whether these associations are linked to terrorist activities or terrorist organizations under the auspices of the Iranian Revolutionary Guards.