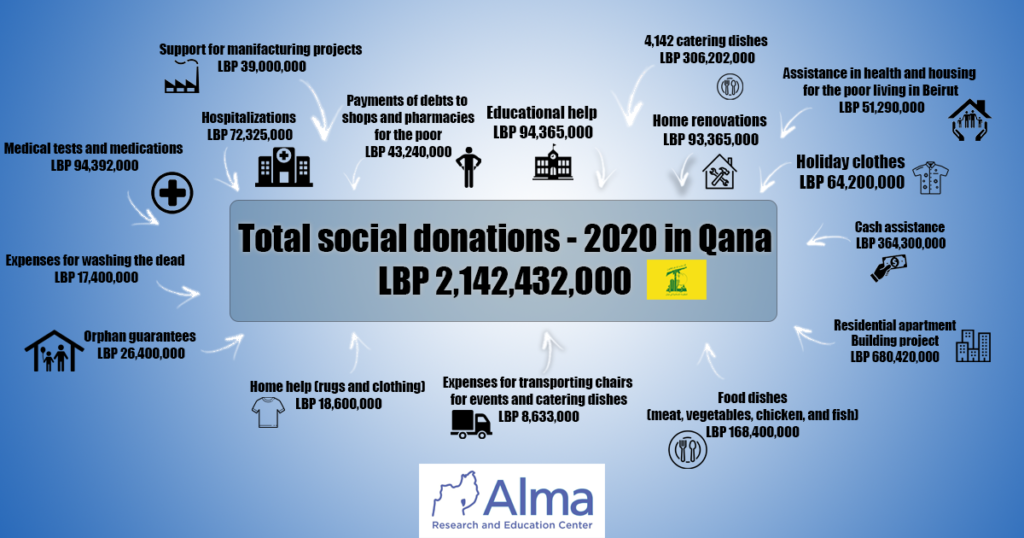 It is impossible to ignore the recent large number of publications of “heroic” statements and Hezbollah announcements regarding extensive donations and assistance it provides to the Shi’ite population in Lebanon in general and in the areas of The Beqaa and southern Lebanon in particular. In these publications, there are detailed tables of these donations intended for the purchasing of, among other things, flour, meat, and medicines.

After Hezbollah announced the donation of 600 million Lebanese pounds intended for the financing of the electricity supply from Syria to the residents of the village of a-Tefil in the Beqaa, and after the donation of diesel fuel to some 20,000 families in the Baka region, a local Hezbollah operative posted a detailed diagram on his Facebook page showing the amount and types of financial donations donated by Hezbollah in 2020 to his home town, Qana, in south Lebanon, a sum estimated at 2 billion Lebanese pounds.

Other publications which preceded the above publications regard Hezbollah’s first Zone (المنطقة الأولى), which includes the provinces of Tyre, Bint Jbeil, and Marjayoun. In this zone, the estimated amount of donations in 2020 stood at twenty-two billion one hundred thirty million Lebanese pounds. This money was donated towards, health, education, and social services.

In the face of this overt advertising campaign, which is run under the slogan “سنخدمكم باشفار عيوننا” (“We will serve you with our clear eyes”), many doubt the accuracy of the published numbers, and consider them too inflated. Nevertheless, from the data we have located and are presenting here on, we can learn about the purpose of the donations in their civilian aspect.

It is important to note that not all of the donations actually reach their civilian purposes, i.e., the Shi’ite population, part of the funds are intended for Hezbollah’s military infrastructure.