“Will The Hunger Trump Hezbollah”? – Is Lebanon Collapsing? 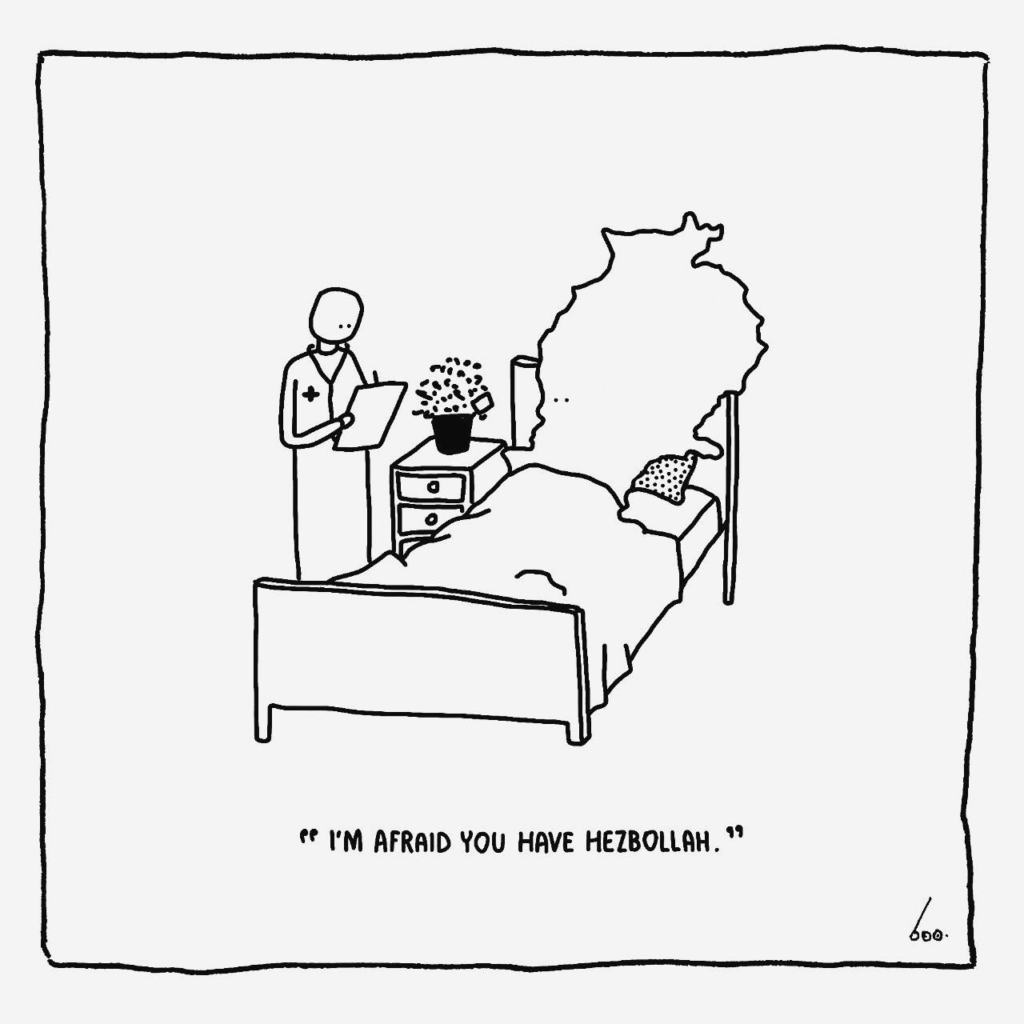 Over the past few weeks, a Twitter campaign, hashtagged “#lebanonstinks”, has been trending on Twitter, showing the Lebanese’s miserable living conditions. Large quantities of merchandise and subsidized food products were smuggled out of the country to be sold at high prices. Lebanon’s Minister of Energy and Water, Rimon Ajar, warned that “Lebanon is facing the possibility of complete darkness”. The Lebanese pound has reached an all-time low, standing at approximately 12,000 pounds per 1 USD. Lebanon’s elite, including Parliament members, were primarily the ones to receive the COVID-19 vaccines, a fact that was widely criticized by the Lebanese.

Since 2008, Lebanon has been receiving numerous grants from the IMF and the European Union. Lebanon’s declaration of bankruptcy has been postponed, again and again, increasing its debt more and more while not having the ability to pay it, due to its lack of export and productive economy. Over the past decade, Lebanon has failed at developing any means of self-income. It has neither any industry nor innovation. Tourism in Lebanon, once a significant source of income, suffered greatly because of the civil war in Syria, which led the Gulf states, led by Saudi Arabia, to distance themselves from Lebanon because of Hezbollah’s increased control over it.

A colleague expert on Lebanon told me this week, that demographically speaking, “everyone [in Lebanon] is leaving”. If things continue like this, Lebanon will remain without its elite. Doctors who haven’t received their salaries are immigrating out of the country. Journalists are announcing their migration on live TV. The negative emigration trend that has started in the 1970s continues to climb. Everyone who can leave – does so, except for Hezbollah and its Shiite base that is comprised of Lebanon’s lower class.

Since October 2019, Lebanon has not had a functioning government, and the nominated Prime Minister, Rafiq Hariri, is unable to form a government that will be approved by Lebanese President, Michel Aoun. The latter has given Hariri an ultimatum on his Twitter account, inviting him to the Baabda Presidential Palace to present him with a list of all the members of the new government, and if he is unable to do so, he should submit his resignation. Hariri replied that the first 16 times he presented the optional government to Aoun in the presidential palace were a great honor, “so the 17th should not be any less honorable”.

The protests were renewed, although it is unclear by whom. Are these spontaneous protests like the ones at the beginning of the September 2019 protests, or are they this time better organized and recorded? Nasrallah echoed the fragile situation in his latest speech: “Civil wars do not necessitate the use of advanced weaponry or missiles, rather only Kalashnikovs and M-16 rifles, which are owned by every Lebanese.”

Many of Hezbollah’s opposers in Lebanon blame it for the continuous political and economic crisis. Hezbollah, on the other hand, blames the international sanctions placed on it for Lebanon’s economic crisis. The truth, however, can be found elsewhere. Lebanese government officials have been emptying Lebanon’s piggy bank for years. Corruption is everywhere, has been there before Hezbollah, and continues to be a central part of a perverted system that plagues Lebanon these days, while Hezbollah is gradually but surely taking over the country.

Due to its sectorial diversity, it seemed many times in the past that Lebanon will not survive. Lebanon has suffered from several civil wars, accompanied by the foreign involvement of various countries, starting from France, the United States, and Israel, all the way to Iran and Russia – just last month a meeting was held with a Hezbollah delegation in Russia, and it is unknown whether its purpose was discussing the new government or rather the conflict with Israel. While in the background of this meeting are the warnings issued by The Chief of General Staff of the IDF, Aviv Kochavi, to Hezbollah that Israel will not hesitate to defend its civilians if Hezbollah will attack from populated areas using the Lebanese as human shields.

Iran’s presence can be seen and felt everywhere. A decade ago, it was still debatable whether Hezbollah suffers from “split personality disorder”, one identity being Iranian, the other Lebanese. Today, however, it is abundantly clear that Hezbollah lives in peace with both identities. In the Islamic Health Organization’s (owned by Hezbollah) opening ceremony for its battle with the COVID-19 pandemic, held in the town of Maaroub in southern Lebanon, a parliament member on behalf of Hezbollah clarified “that the Resistance is proud of its relations with the Islamic Republic”, and also admitted to Iran “that Hezbollah is taking part in the Palestinian struggle…” On social media, the hashtag “#Iranian fuel in one Lebanese Lira” is trending, as part of Hezbollah’s supporters’ desire to promote Iran’s aid.

Will the political and economic crisis in Lebanon bring an end to Hezbollah, or bring about the collapse of the State of Lebanon?

A Lebanese man I recently met told me “Soon we will be able to tour Beirut and eat hummus together. Hunger will defeat Hezbollah”. The question is – will it? Might not all this be just wishful thinking?

First, it is important to clarify that there is no famine in Lebanon. Every Lebanese person has some sort of safety net that allows him or her to survive, whether it be a home farm that supplies food, cash hidden “underneath a mattress”, relatives living abroad that provide financial support, or real estate that can be sold. Second, Hezbollah provides food, medicine, and basic needs to prevent this famine, even though Hezbollah is one of the causes of the economic crisis in Lebanon and a continuous detriment to the Lebanese state’s sovereignty.

To answer the question of whether Lebanon is falling apart, we must ask ourselves “what does “fall apart” mean? What is control?” Unofficially – Hezbollah controls Lebanon, as it is stronger than the Lebanese Armed Forces. Hezbollah’s and the Amal Movement’s increased alertness is already apparent in south Lebanon, allegedly for guarding subsidized products against theft. Hezbollah has almost complete control of Lebanon’s social systems, via both the government it controls and the social organizations it has established.

According to reports in Lebanon, Hezbollah is putting pressure on Lebanon’s Media Committee to pass a special and stringent law that will limit the freedom of expression in the media in Lebanon. Journalists in Lebanon feel threatened: Qassem Katzir, considered close with Hezbollah, has suffered insults and threats on his life for criticizing Hezbollah for its relations with Iran, and inviting it to revert to its Lebanese identity. These insults and threats continued until he was forced to apologize for his words. A video has been trending on the internet showing journalist Joyce Akiki from the MTV channel trying to report live and being prevented to do so by Hezbollah operatives. Karma Hiat, daughter of the owner of the Al Jadeed Lebanese media channel, blamed Hezbollah for shutting down the channel after it criticized Hezbollah and blamed it for the economic crisis in Lebanon. Let us not forget the incident of Lokman Slim, a Shiite criticizer, who was found dead in his car shot in his head and body several weeks ago.

All that aside, for a state to collapse, something vital must happen first – its army needs to fall apart.

In the 1970s we saw Lebanon collapse. The Lebanese Army, which was comprised of religious-sect-based battalions, fell apart and separated into militias. Every unit separated in order to protect its respective sect. Today, the LAF is the last remnant of Lebanon’s independence. It is what remains of the common denominator between the Lebanese that oppose Hezbollah and the Lebanese that support it, a common denominator that is comprised of a variety of religious sects.

However – we can already see more Shiites in the combat units in the LAF (in synchronization with their increasing numbers in the population). Meanwhile, cooperation between the LAF and Hezbollah was spotted both on Lebanon’s border with Israel and in the fighting against ISIS on the Syrian border. The LAF, per its ideology, lives in coexistence with a militia stronger than it – Hezbollah.

Last week, the commander of the LAF gave an unusual address. He criticized Lebanon’s political elite and warned: “Where are you going? What do you intend to do? We have warned more than once about the danger of the situation and the possibility of it exploding.” He then hinted at the LAF’s difficult economic situation: “Some accuse us of living in bliss, but this is not true, and these are false accusations that we will not accept, and we will not accept that the rights of our military personnel be violated.” He essentially elaborated on the rumors of the LAF soldiers going AWOL, by saying that military personnel is sent on unpaid leave so that they can work in addition to their military service. He then added: “Do you want an army or not? Do you want a strong and steadfast institution or not? The army is required to perform many tasks and it is always ready to do so, but that cannot be matched by a continuous and repeated reduction of the budget and discussions about the rights of the military.”

Over the years, experts have failed to predict popular revolutions and the collapses of states. Despite the many years we have been studying Lebanon, we will probably not be able to pinpoint the exact moment Lebanon will change its image, the moment the LAF will fall apart. One bright and crisp day we will awaken to a different Lebanon. Will this new Lebanon be utterly broken, like its sister, Syria? Will it be divided into many fragments controlled by foreign authorities, or will Hezbollah succeed in taking control of them and uniting them? but at the cost of implementing Iran’s Islamic Revolution, a revolution that leaves no room for a democratic and pluralistic Lebanon with the “Beirut” atmosphere we once knew and loved.