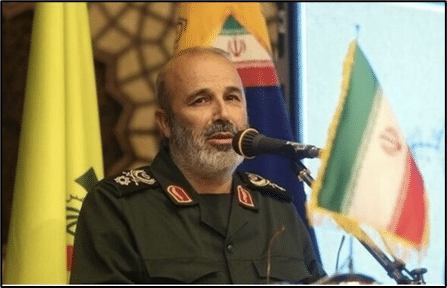 Muhammad Reza Falahzadeh, aka “Abu-Bakr” (ابوباقر), is a senior commander and one of the long-time members of the IRGC with the rank of sartip (سرتیپ) the equivalent of brigadier general. After Hejazi’s death, Falah Zadeh was appointed deputy commander of the Quds Force in place of Hejazi, at the suggestion of IRGC commander Hussein Salami, and with the approval of Supreme Leader Ayatollah Ali Khamenei.

In his last position, Falahzadeh was Quds Force’s deputy director of coordination. In this role, he was considered “number three” in the Quds Force’s command hierarchy. Falahzadeh was appointed to this position, following his performance in the Syrian civil war and after receiving the recommendation of Qassem Soleimani. Accordingly, he was promoted to the rank of sartip in 2018. Falahzadeh is one of the lesser-known commanders of the Revolutionary Guards but is considered one of the most senior.

Falahzadeh was born in 1341 of the Persian calendar (the equivalent of 1962) in Abarkooh, Yazd Province. He served as one of the IRGC’s main commanders during the Iran-Iraq war and was later appointed Basij commander participating in the suppression of student protests in 1999.

In 2013, Falahzadeh was stationed in the Syrian arena with Hossein Hamedani, who planned the brutal suppression of the demonstrations in Iran in 1988, planning to use the same brutal tactics to suppress demonstrations in Syria; based on the “success” he achieved in Iran.

Falahzadeh participated in battles in Syria and was one of the IRGC’s five main commanders in the battle for Aleppo from 2014 to 2016. The battle was part of a military campaign nicknamed “Nasr”. During the years he fought and commanded in Syria, he was considered a close aid of Qasem Soleimani, alongside Hejazi.

Other roles Falahzadeh performed in the past: Governor of Yazd Province for 6 years, during the tenure of former President Mahmoud Ahmadinejad (appointed in 2007). Command of the 33rd al-Mehdi Division, the 19th Fajr Division, and the IRGC command in Yazd, Esfahan, and Fares provinces.

One of his first positions in the Revolutionary Guards was to command the construction of camp Karbala. The Karbala camp is one of 10 IRGC underground bases built in the early years after the Islamic Revolution (late 1970s-early 1980s). The main objective of establishing these bases was to create an alternative and independent command network of the Revolutionary Guards in case the central command infrastructure in Tehran was damaged or destroyed as a result of war or an internal threat (protests and rebellions). The Karbala base is the oldest base, its construction began in 1981, in the early years of the Iran-Iraq War. The base is in charge of several regions in the Khuzestan and Lorestan provinces.

Muhammad Reza Falahzadeh is a very experienced veteran officer. His extensive experience in the Syrian arena is his advantage and, in our assessment, he will be able to step into Hejazi’s shoes relatively easily. As far as Quds Force commander Qaani is concerned, Falahzadeh will be able to take responsibility for the activity in the Syrian arena, similar to Hejazi, allowing Qaani to focus on Iraq, which is the weak link in the Iranian-led radical Shiite axis chain.