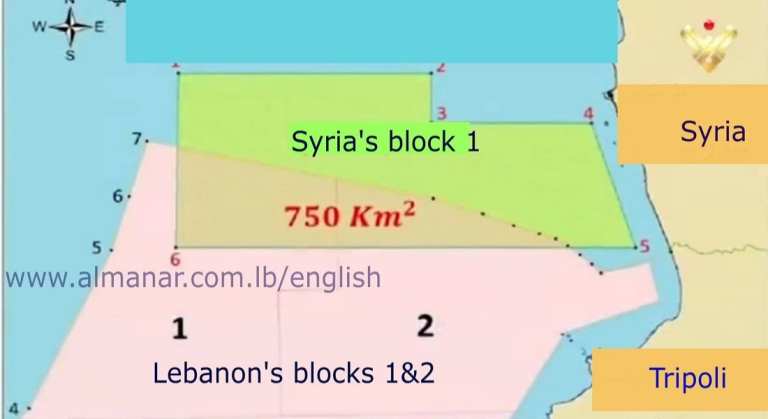 The issue of demarcating Lebanon’s maritime borders has returned in recent days to the center of the stage. This time it is not the maritime borders vis-à-vis Israel, but the maritime borders with Syria. While in the south, facing Israel, Lebanon is hardening positions and imposing unacceptable territorial demands that thwart negotiations between the two countries, In the north, Syria began searching and drilling for gas in Block 1 along the maritime border with Lebanon after signing an agreement with the Russian company “Capital”.

The problem being –Syrian Block 1 overlaps with Block 1 and Block 2 on the Lebanese side. Lebanon already lost in the race to offshore energy sources with both Cyprus and Israel, after they both previously signed an agreement regulating the maritime border between them in 2010, due to a dispute over the Aphrodite gas reservoir. The agreement did not include Lebanon, which opposed it at the time.

In 2011, Lebanon unilaterally demarcated its maritime borders with Syria, a determination rejected by the Assad regime, which in 2014 filed a formal complaint against Lebanon at the United Nations. Thus, there is no formal or orderly border registration between Lebanon and Syria and no Lebanese government has dared to demand Syria regulate the issue.

Laury Haytayan, Middle East director at the New York-based Institute for Natural Resources Management, called on the Lebanese government to announce its position on the issue and to demand clarifications from Syria on gas extracting in order to protect its rights. She added that Lebanon could also demand that Russia mediate in the matter if it did not want to enter direct negotiations with Syria.

Against the background of the Lebanese government’s official deafening silence on the matter, and President Michel Aoun’s disregard for the issue, the head of the Lebanese Forces Party (Christians) Samir Geagea called on Lebanese political forces to act urgently against the Syrian Assad regime opposing the annexation of Lebanese territorial waters. As so, Syria is to take a chunk out of about 750 square kilometers from Lebanon’s economic waters.

Gibran Basil, Hezbollah’s political ally who heads the Free National Movement, claimed on his Twitter account that during his years as energy minister and foreign minister (2010-2017), he tried to reach out to officials in Lebanon and Syria to solve the problem of maritime borders between the two countries, but “no one listened and there was no response from Beirut”.