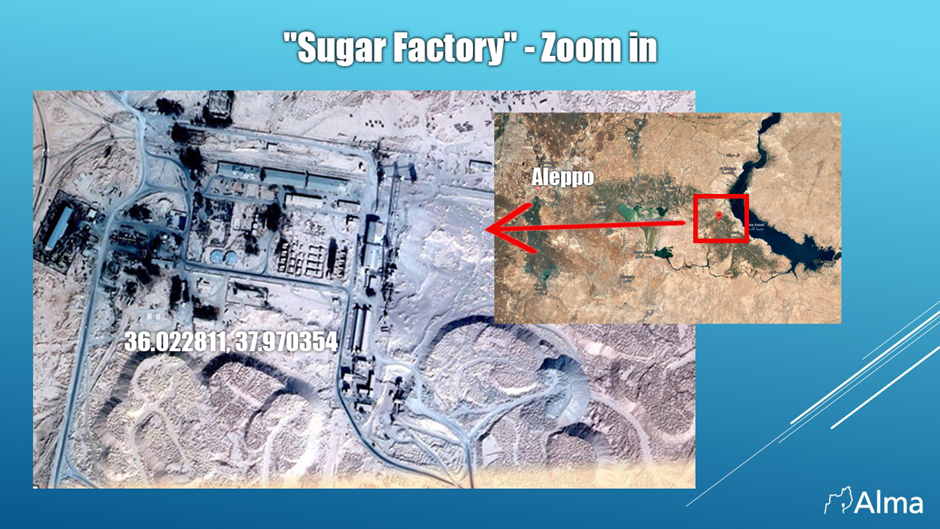 The sugar factory is a central compound of the radical Shiite axis led by Iran in northern Syria and serves as a base for forces securing, among other things, one of the traffic hinges of the land corridor. Recently, the radical Shiite axis led by Iran, through the Shi’ite militias, began demolishing and removing structures damaged by international coalition airstrikes inside the sugar factory compound located west of Ras al-Ain al-Bumani (northwest of Meskene –  مسكنة) on route 4 connecting Aleppo to Raqqa (about 100 km southeast of Aleppo-  coordinates – 36.022811 37.970354, – Google Maps).

The demolition and evacuation of the damaged buildings are carried out to prepare the compound for construction works. New offices, prisons, garages, and underground warehouses for concealing and storing weapons will be built. In addition, work is being carried out to establish a training camp inside the compound.

The construction project was carried out on the orders of Hajj Juad al-Jafari, one of the main Iranian military commanders in the Aleppo area. Haj Marwan Tahan, an Iranian engineer, is in charge of the construction work, and Haj Shaheen al-Abich and Hajj Khashar Ahman are in charge of constructing the weapons depots.

In 2015, fighting between ISIS factions and the Syrian Army (backed by the radical Shiite axis forces under the command of the Revolutionary Guards and in cooperation with the Afghan Shi’ite Fatemiyoun Brigade, Iraqi Shiite militias, and Hezbollah), took place in the area where the sugar factory is located.

In 2017, the Syrian army expanded its control over the rural area east of Aleppo, regaining control of the area where the sugar factory compound is located. After reconquering the area, a military base associated with the Assad regime was established in the sugar factory, which was utilized as a starting point for military campaigns initiated by the Syrian Army in general and for Sohail al-Hassan’s “al Nimr” forces in particular, against ISIS forces, operations proceeding from the northern desert of Aleppo to southern Raqqa.

Today, the radical Shiite axis forces led by Iran control the city of Aleppo and its eastern rural area. The Shiite militias are working to spread their Shi’ite doctrine in the region and to recruit young people for money. Military reinforcements have recently been sent to the sugar factory compound. Reinforcements include fighters from the Afghan Fatemiyoun Brigade and the Shi’ite Kata’ib Hezbollah Brigade. The Sugar Factory compound is a base for carrying out military training in the Syrian desert and for carrying out military missions in the region.

Since the sugar factory is a major compound of the radical Shiite axis led by Iran in northern Syria, it constitutes a target for ISIS forces still operating in the area. On March 20, 2021 – 12 militiamen were killed in the compound as a result of an explosion that appeared to be a planned attack.