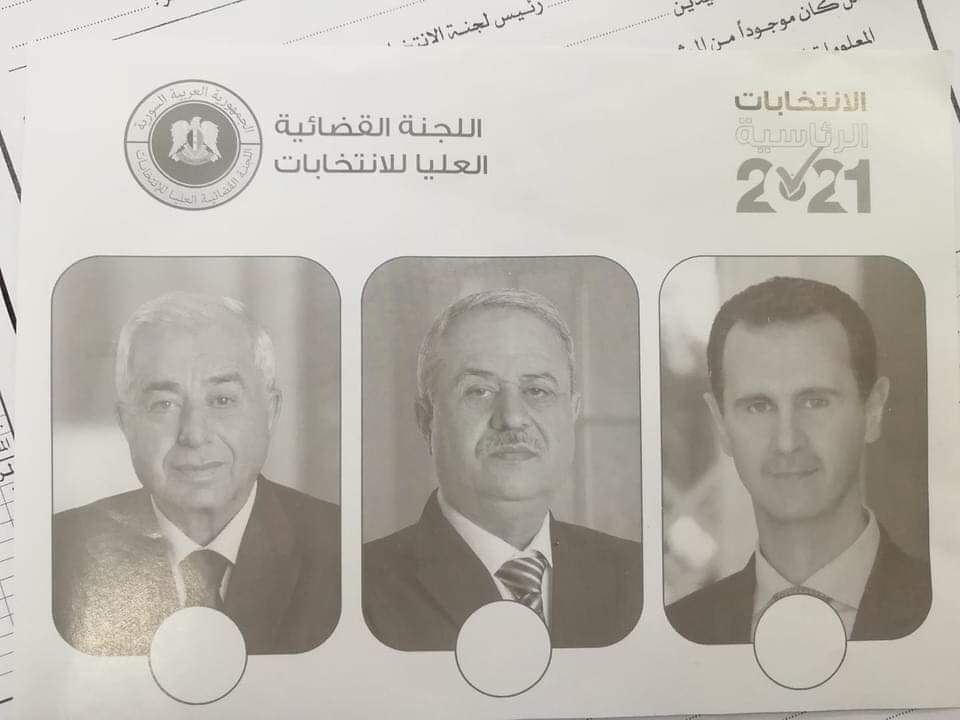 Seven years ago, displaced Syrians fled to refugee camps in Lebanon, mainly to the Lebanese Beqaa Valley. This following the failure of the revolution and the squashing of the will of the people, which became the bloody Syrian civil war. Now, the refugee camps in the Bekaa Valley are watching the current deception of the will of the people: the presidential elections in Syria. The countdown to the presidential election scheduled for May 26 is underway. After that, Bashar al-Assad will be inaugurated as President of Syria again, with no surprises to be expected.

Preparations towards the Syrian presidential elections are also intensifying in Lebanon, and various parties, forces, and intelligence agencies supporting Assad’s regime have begun to do everything in their power to drive thousands of Syrian refugees to vote for Assad. On May 20, displaced Syrians living outside of Syria can vote at their local Syrian embassy.

Hezbollah became the director of Bashar al-Assad’s election campaign in the Beqaa Valley, directing its efforts to “persuade” the refugees to vote for him. The areas where the Syrian refugees are located along the Bekaa are characterized by political differences, while the residents of the camps in the center and west of the Bekaa are considered to lean towards the opposition. No significant participation in these camps is expected in the upcoming elections, therefore Hezbollah has begun preparing to ensure broad participation under its patronage. Whether using temptations, applying pressure, or threats.

Hezbollah summoned a dialogue meeting under the name: “the Association of Syrian Workers”. In the meeting it was decided to appoint committees to collect and provide statistics on the number of potential “voters”, registering them in designated election lists and securing means of transportation to the polls. It was also decided to designate Bashar al-Assad as the absolute and exclusive candidate. In addition, the offices of “the Preparatory Committee for the Syrian Presidential Elections in Lebanon” were opened in the towns of Bednayel and Chmistar in Baalbek-Hermel.

Hundreds of Syrian refugees were called to a meeting with the Syrian Workers Union, on the pretext that the meeting was related to the distribution of aid from the United Nations. The meeting took place in the office of Mohammad Matar, Vice President of the Syrian Arab Ba’ath party in the Lebanese town of al- Miniyeh. About 500 refugees attended the meeting, thinking and hoping it would include the distributing of aid for the month of Ramadan, only to discover that the meetings’ goal was to recruit them to vote for Assad in the presidential elections.

The Syrian refugees received severe threats from the Syrian Workers Union if they were not to elect Assad for president. Pro-Assad representatives toured the refugee camps where they met with a number of Syrian refugees informing them that the camps would be a target for gangs if they did not force all eligible refugees to vote for Assad. Groups affiliated with Hezbollah frequently visit the refugee gatherings in Lebanon, where they impel the refugees to participate in the elections. Syrian organizations and forces loyal to the regime are trying to lure, or threaten, if necessary, Syrian refugees who are eligible to vote in elections, by inducing them to register as voters and to go the polls.

In the town of Aarsal, the elections have become an internal dispute between Syrian refugees. Dissidents see participation in the elections and support for Assad as unacceptable. Opposition refugees, who support the Syrian revolution, are unwilling to accept that the townspeople will participate in elections that are known in advance to be in Assad’s favor. Several dissident activists have also stressed that whoever votes for Assad is free to do so, but whoever does is unwelcome in the town, and must leave to other towns in the Beqaa Valley where the Syrian regime is supported. On Election Day, the activists are planning to burn Assad’s portraits, sending a clear message to the international community; the displaced Syrian residents of Aarsal will not forget the oppression of the Assad regime.

Syrian refugees are left with no choice but to quietly follow the process of falsifying their will in front of them, especially since Hezbollah is exerting its full influence in supporting Bashar al-Assad in the elections. According to Syrian journalist and opposition activist Ayman Abdel-Nour, the preparations made by the Assad regime and its allies to hold Syria’s presidential elections in the refugee sanctuary countries are intended to delude the world that the refugees want the re-election of Assad.