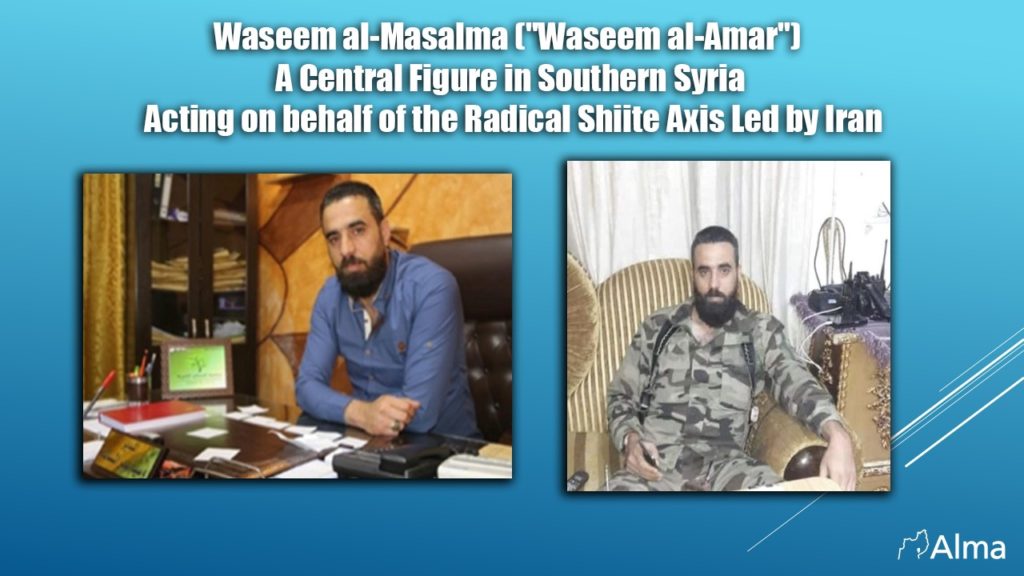 The al-Arin militia was initially formed under the name “Brigade 313”, and has since been closely linked to the radical Shiite axis in general and with Lebanese Hezbollah in particular. The militia has two Lebanese Hezbollah-appointed controllers: “Haj Suleiman” and “Mostafa al-Arabi.

Al- Masalma previously participated in the battles of eastern and western a-Utin alongside the militias, and the battles for Deraa and its surroundings, before the reconciliation agreements between opposition rebels and the Syrian regime in 2018.

Wasim al- Masalma is responsible for the security of the activities of two civilian foundations established by the radical Shiite axis led by Iran in southern Syria. The first is the “Jamaia al-Zahra’a” foundation (“al-Zahra’a” – the literal meaning is “flower”, insinuating the second name of Fatma, the daughter of Muhammad, the wife of Ali Ibn Abu Taleb – the first Caliph of the Shia). The second is the “Jamaia Al-Bostan” foundation (these days its name changed to the “al-Arin” foundation). The foundation receives direct support from the offices of the Supreme Leader Ali Khamenei’s representatives in Syria and the Iranian embassy in Damascus.

The al-Masalma family from Deraa is strongly involved in the foundation’s activities. For example, the Jamia al-Zahara foundation is overseen by dignitaries and clerics from the city of Deraa, among them are Issam al-Masalma and Issa al-Makahl al-Masalma. Iran chose the city’s largest al-Masalma family to influence the locals. This is an example of the linkage and connection between the Shi’ite axis and large families in southern Syria. ( for the civilian activity of the radical Shiite axis in southern Syria, see our report we published on the subject).

In 2020, the Assad regime’s military security summoned al-Masalmeh to a meeting in Damascus to discuss the deteriorating security situation in the Deraa province. This was after residents of the area demonstrated against the dire economic situation. To control the security situation in the province, it was decided to expand al-Masalmeh’s authority, thus, he and his forces were assigned the management of the assassination assignments in the western part of Deraa province, on behalf of the Syrian army’s security. Many in Deraa believe that al-Masalmeh is involved in the abductions and assassinations of former fighters in the Free Syrian Army, as well as civilians:

In recently released voice recordings, Wasim al-Masalma is heard expressing temptations offered to teenagers and young people in exchange for their joining of the local mercenary militias operating in southern Syria under the auspices of the radical Shiite axis led by Iran. In the recordings, al-Masalma can be heard specifying the temptations, such as, postponing military service, regulating their security situation, and returning the family assets seized by the regime.

The recordings state: “Those who go with the Islamic resistance, their property, livelihood and family will receive more than 1,000 blessings… and in later stages, they will get to become a Hajj…”.

Wasim al Masalmeh has established himself as a major local leader. He positioned himself as such in the face of both the local population and the radical Shiite axis led by Iran. He appears to be becoming one of the main proxies of the Shiite axis in southern Syria in general and in the Deraa region in particular.