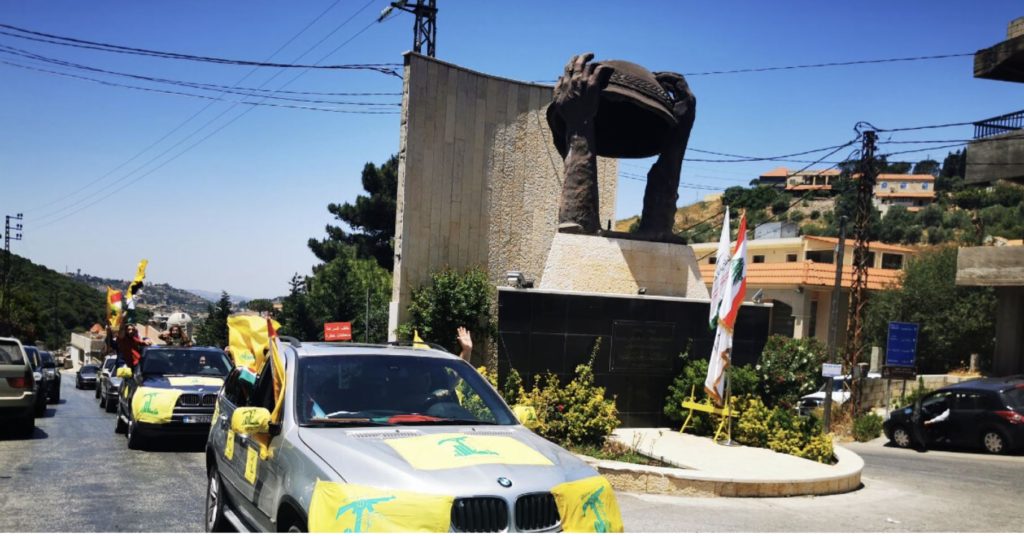 “Resistance and Liberation Day” is commemorated in Lebanon on the 25th. of May every year, since the IDF withdrew from the security zone in southern Lebanon in the year 2000. Every year, Hezbollah commences the events marking this day, beginning on May 21st. (the day the IDF began to withdraw from southern Lebanon).

This year, the 21st. anniversary of “Resistance and Liberation Day”, convoys of motorcycles, demonstrations, and marches were seen last week along the border with Israel, in which Hezbollah, Amal, Lebanese, Palestinian and Iranian flags were hoisted. As part of the commemoration, reconstructions of events that occurred after the IDF withdrawal from the security zone were displayed. The reconstructions included; staged breaches of IDF outposts accompanied by pyrotechnics, explosions, and fires. Events marking the day took place throughout Lebanon. In the city of Baalbek, for example, Hezbollah commemorated the “Resistance and Liberation Holiday” in a ceremony dedicated to the families of the fallen soldiers of the resistance, held at the Imam Khomeini Shi’ite mosque.

At the height of the events, Hezbollah carried out a display of bombings of the former locations of IDF and SLA outposts in southern Lebanon.

It should be noted, that this year the “Resistance and Liberation Day” events were in close proximity to the confrontation with Hamas in the Gaza Strip, and therefore the narratives of these two events seem to have “combined”, hence this year we observed more Palestinian symbols and statements sympathizing with the Palestinians.

The highlight was to be Nasrallah’s speech on the evening of May 25th. In his speech, Nasrallah tied the months of May’s “two victories”: the victory of the Lebanese resistance in May 2000 and the victory of the Palestinian resistance in May 2021. Nasrallah stated that attacks on Jerusalem and Al Aqsa would not stop at the borders of the resistance from Gaza. Any such move would become an existential danger to Israel. The rules of confrontation with Israel stay valid and existent. Lebanon’s situation is different from Gaza’s, although it is not a simple situation. Nothing will affect us, while the equation is to maintain Lebanon’s security and stability and the security of its people and soil. Nasrallah added that the death of Muhammad Tahan (a Hezbollah reservist who died during the demonstrations near Metula during the Gaza conflict) has been added to the martyr’s debt…”

However, given his current health, this was not a typical Nasrallah speech. Instead of talking about Nasrallah’s messages in the speech (especially in light of the Gaza conflict), everyone is engrossed in Nasrallah’s “speech of coughs and dyspnea”, a speech we call “Nasrallah’s health horror show”. Instead of showing his fans and supporters strength, determination, and confidence, Nasrallah’s appearance made them fearful and worried. During the speech, Nasrallah was seen and heard suffering from coughing and shortness of breath. Unlike in the past, he needed many breaks during his speech.

The concern and apprehension caused Naim Qassem, Nasrallah’s deputy, to make an unusual public statement stating that “Nasrallah’s health is good, he should have rested but he did not want to disappoint all of his supporters who awaited his speech … his non-appearance would have raised unnecessary questions …”.

Is this how Nasrallah wanted to conclude the “Resistance and Liberation Day” events? Unintentionally, the narrative of the day became a narrative regarding Nasrallah’s health…