The Siege on “al-Balad” Area in the City of Daraa 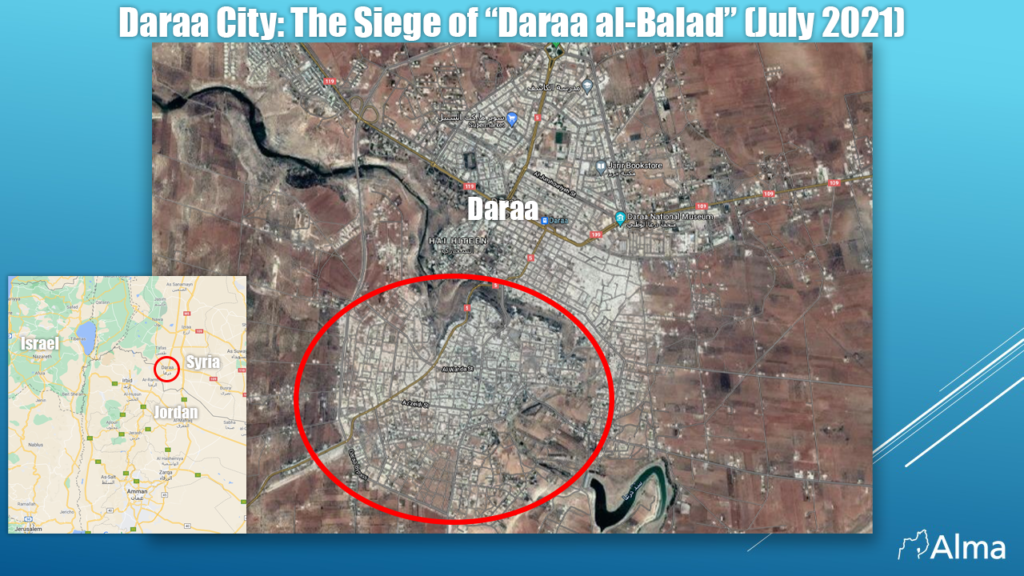 The Russians, the Shiite axis, and the Syrian regime are punishing the local residents.

In the past two weeks, the city of Daraa has witnessed a security escalation led by the Russians, the Syrian regime, and the radical Shiite axis led by Iran. This was after negotiations between the Russians and the regime and the Central Committee representing the residents of Daraa reached a dead end. The talks between the parties were concerning the local militias in Daraa and dealt with the security situation in the area of the Daraa district in general and the city of Daraa in particular, which has been suffering from daily assassinations and general security chaos. The local residents, represented by the Central Committee, claim that the local militias are responsible for the assassinations and the deteriorating of the security situation.

The data collected by us indicates that the local militias in southern Syria are engaged in a variety of missions on behalf of the radical Shi’ite axis headed by Iran, such as: establishing presence and deterrence (Deterrence towards the local population), conducting activity against those who interfere with the radical Shi’ite axis entrenchment in the region, assistance in the establishment of civic infrastructures, assistance in recruiting new activists, securing the movement of senior axis officials during their exposed and secret visits to the area, weapons, and drug smuggling, as part of the major narcotics trafficking operation run by Hezbollah from Lebanon (A comprehensive study on this topic will be published soon).

The militias also act to assist the activities of Syrian regime forces affiliated and closely cooperating with the radical Shi’ite axis. This mainly refers to the 4th Armored Division (The Syrian army’s 4th. armored division, commanded by Maher al-Assad the president’s brother) and one of the Syrian intelligence apparatuses known as the “Air Force Security”. They also cooperate with the forces of the 1st. Corps, which are permanently stationed in the southern Syrian sector.

Several prominent militias operate in the city of Daraa: Mustafa Qasim al-Masalma’s militia, known as “al-Kassem”, operates in cooperation with the military security branch located in the al-Manshiya neighborhood. Shadi Bajbouj’s militia, which also cooperates with the military security. Wasim Omar al-Masalmeh’s militia operates under the auspices of the radical Shiite axis led by Iran and in cooperation with the Air Force Security Intelligence Organization and the 4th. Division and Muhammad Tarqi al-Masalma’s militia also operating under the auspices of the 4th. Division.

On June 23, a Russian general known to the locals as “Assadullah” demanded that the residents’ representatives of the Daraa al-Balad area hand over about 200 personal weapons, in exchange for the distancing of the local militia’s activity from the neighborhoods of Manshiya and Sajna in Daraa. In response to the resolute refusal of the Central Committee representatives to agree to the above terms, the Russians suspended the negotiations, laying siege to the al-Balad area and closing the main roads leading from it to the rest of Daraa. On June 25 warplanes were seen circling over the area and a convoy of the pro-Iranian militia, the Radwan Battalion approached the village of Azar and the Sajna neighborhood. It should be noted that possession of personal weapons such as rifles and pistols is permitted under the reconciliation agreements with the Syrian regime signed in the summer of 2018.

Currently, no negotiations are taking place. We were able to locate several indications that Iranian representatives demanded, that as part of future negotiations, Shiite civilians be returned to their homes in Daraa district, especially to the town of Busra al-Sham. This is an additional condition for the distancing of the activity of the local militias from Daraa.

The siege on the Daraa al-Balad area directly affects some 11,000 families living there. Residents are warning of a growing shortage of food and medicine. According to local feelings that have come to our attention, this conduct is a provocation by the Assad regime and the Russian forces, that comes in retaliation against the region for its strong stance against Syria’s presidential election held last May and the popular protests the area voiced at the time.

On social networks, we have located publications of small-scale protests and expressions of solidarity with the besieged residents, as well as demonstrations on behalf of the residents of Daraa themselves. In addition, Syrian activists launched a campaign under the hashtag “Lift the siege of Daraa”, to put pressure on Russia to lift the siege.