Ibrahim al-Amin: The Unofficial Spokesman for the Hezbollah Leadership 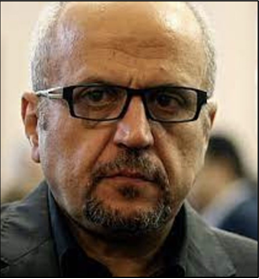 Ibrahim al-Amin is the CEO and editor-in-chief of “al-Akhbar” newspaper. He is also a journalist and political commentator. Al-Amin is an ardent Hezbollah supporter and is known for his oppositional views against the March 14 coalition. Since founding “al-Akhbar” (along with Joseph Samaha, who has since passed away) in the mid-2006, al-Amin has been in a close relationship with Hezbollah and its senior figures. This relationship has always been the envy of many of his professional colleagues in the journalistic world in general and throughout the Shi’ite journalistic camp in particular. Al-Amin’s articles are considered a mouthpiece for Hezbollah’s official positions. Because of this, al-Amin is referred to with contempt as “the agent of wilayat al-faqih” (meaning that he is the spokesperson for the rule of the religious sages, i.e., the spokesman for the Hezbollah leadership).

Al-Amin is known for his opinionated columns on al-Akhbar, which deal with current issues in Lebanon and the region. As so, he actually presents and conveys Hezbollah’s propaganda messages and narratives making them accessible to the Lebanese public. For example, al-Amin wrote an article against the recent statements of the Maronite patriarch, Bechara a-Ra’i, regarding the internationalization of Lebanon, in accordance with Hezbollah’s prevailing resistance to al-Rai’s initiative. In addition, after the end of Operation “Guardian of the Walls” in the Gaza Strip, al-Amin made sure to write an opinion column in accordance with Hezbollah’s new narrative; The article dealt with the double victory on the anniversary of liberation and resistance, i.e., the victories of the Lebanese resistance in May 2000 and the Palestinian resistance in May 2021.

Al-Amin also publishes articles explaining the logic behind Hezbollah’s actions and responses against Israel. For example, al-Amin wrote that anyone who bet that the explosion at the port of Beirut in August 2020 would lead Hezbollah to cancel the planned response against the killing of a Hezbollah operative in Syria by Israel is wrong, and Hezbollah’s response is a fait accompli.

Many Researchers see his articles as a compass – In addition to Nasrallah’s speeches – in the direction of Hezbollah’s action regarding Israel. But those same researchers sometimes forget that this is actually part of the Information Warfare.

In April 2014, the Special Tribunal of Lebanon (Investigating the assassination of former Lebanese Prime Minister Rafik Hariri in 2005) filed charges against Al Amin on charges of contempt of court and obstruction of justice. Al-Amin faced a maximum penalty of seven years in prison, a fine of 100,000 euros, or both. The indictment was filed after two articles published by al-Akhbar newspaper in 2013 revealed information identifying details about 32 secret witnesses in connection with the assassination of Hariri in 2005. In Lebanon, Lebanese law restricts the publication of confidential information. Needless to say, this publication was on behalf of Hezbollah in order to send a threatening message to these witnesses and intimidate them, all in order to prevent their testimony.

After the indictment was filed, al-Amin the Shi’ite, appealed to the vice president of the Supreme Shi’ite Council and asked to meet with him in order to clear his name and improve his image. The deputy chairman of the Shi’ite council, Sheikh Abdul Amir Kablan, waited for al-Amin to come. However, al-Amin, who was accused of witness endangering, never showed up. He may have been instructed by Hezbollah not to attend this meeting. Al-Amin’s behavior left a grudge on part of the Sheikh and the Shi’ite council in general since al-Amin did not even bother to apologize or explain the meaning of his non-show.

Although al-Amin belongs to the Shi’ite faction, he is known to hold communist views. For example, a picture of him at the Sayyida Zeinab shrine caused bewilderment among the public because of the contradiction between the two ideologies. Another query about al-Amin’s sympathies had surfaced among the public, after the display of a picture of him watching the special tribunal’s indictment of him on television, with the North Korean Communist flag in the background.

Although al-Amin proved his loyalty to the axis of resistance repeatedly, when he dared to express a dissimilar position, he became an enemy of Hezbollah overnight. In a speech given in March 2020, Nasrallah criticized figures considered Hezbollah’s allies, while political sources clarified that his main anger was aimed against al-Amin, who wrote an article directly criticizing Nasrallah. Consequently, since then, al-Amin has completely obeyed Hezbollah’s narrative, actions, and messages.