Rocket Fire at Israel from Lebanon – The New Regional Equation – “The Defense of Al-Aqsa”? 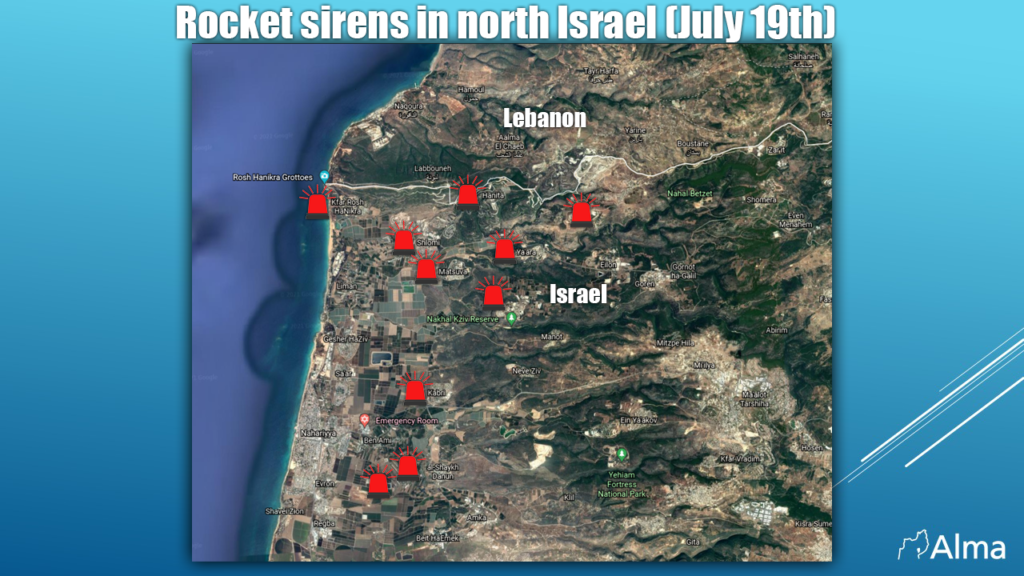 Following the escalation of events in the Gaza Strip last May, Nasrallah joined Hamas’ perception narrative regarding the “defense of Al-Aqsa”. In his recent speeches, Nasrallah continued to reinforce the narrative, noting that the “resistance” axis (referring to the radical Shiite axis led by Iran) has established a new regional equation that is the defense of “Al-Aqsa”. In addition to Hezbollah and Hamas, the Houthis from Yemen and several Iraqi Shiite militias have announced that they are joining the equation.

During the night (July 20), two Grad rockets were fired from south Lebanon into Israel. One rocket was intercepted by the Iron Dome aerial defense system and a second rocket fell in an unpopulated area, causing no damage. Another rocket that was not launched was found by the Lebanese army in the area northwest of the town of al-Qlaileh (south of Tyre). Air raid sirens were sounded throughout the western region of northern Israel adjacent to the Lebanese border. The IDF responded with artillery fire into Lebanese territory (approximately 12 shells).

The rocket fire from Lebanon is unlikely to be related to the attack in Syria on July 19. Over the past two days, there has been great tension in the Temple Mount (Al-Aqsa Mosque) related to the approved entry granted to the Jews into the compound. As usual in such cases, there was excessive incitement on social media and in the Arab media and the spread of fake news as if “the Jews are coming to take over Al-Aqsa before the Feast of Sacrifice” (“Eid al-Adha” – the Muslim holiday starting today).

We estimate that the rocket fire was carried out by Palestinian elements linked to Hamas, with the knowledge and in coordination with Hezbollah. The activities of Hamas Lebanon are coordinated with Hamas Gaza through Hamas headquarters which are based in Turkey. Hamas’ “construction bureau” is the operative apparatus responsible for the intensification of Hamas in Lebanon. Among other things, this apparatus is responsible for the development and production of special weapons.

The shooting came to affirm the existence of the new regional equation regarding the defense of “Al-Aqsa” that Nasrallah was talking about. In our assessment, Hamas was not interested in firing rockets from Gaza so as not to provoke an Israeli response and escalate the situation there. Hamas is interested in additional time to recover from the escalation events of last May and is also not interested in an Israeli response during the Muslim holidays. However, to fulfill the equation announced regarding Al-Aqsa, it is easier to carry out “symbolic” rocket fire from Lebanon, with the knowledge and in coordination with Hezbollah, knowing that the Israeli retaliation against Lebanese territory is different.