Bashar al-Assad – In the struggle between Russia and Iran’s radical Shiite axis for control of Syria! 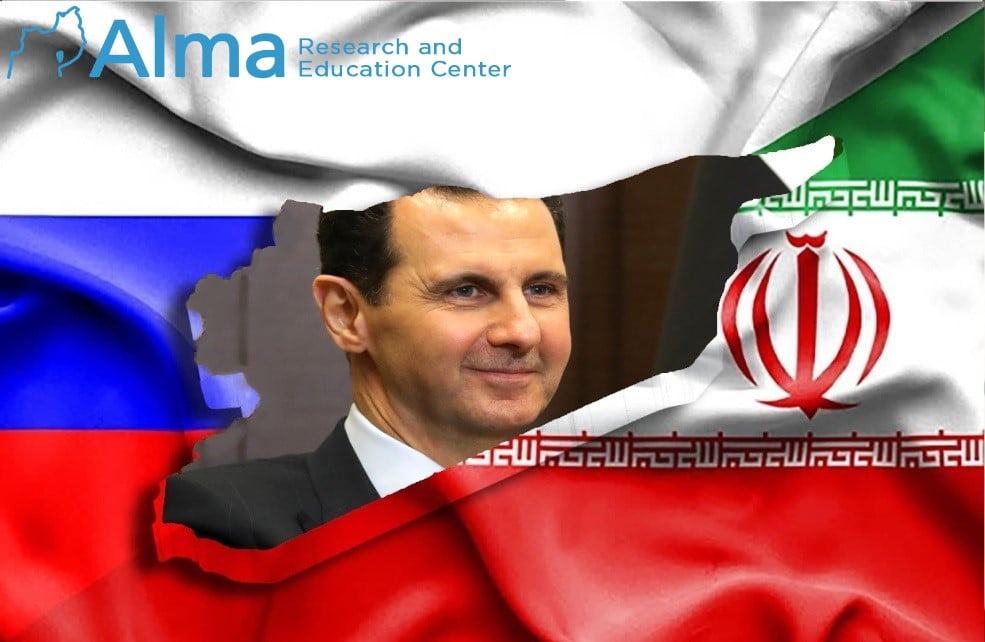 Bashar al-Assad came to power following the death of his father, Hafez al-Assad, in June 2000. From the time he came to power, it was clear that he was not a leader of his father’s magnitude and that he had “big shoes to fill,” something that would take him some time.  During Bashar’s reign until the outbreak of the Syrian civil war, Bashar’s rule was characterized by several failures that led, among other things, to the outbreak of the civil uprising.

In the regional arena, Bashar lost Syrian dominance to Iran and Hezbollah, following Syria’s involvement (together with Hezbollah) in the assassination of Lebanese Prime Minister Rafik Hariri in February 2005. The assassination led to the Cedar Revolution and the withdrawal of the Syrian forces from Lebanon in April 2005. This withdrawal directly affected the Syrian economy, although Syria still had the ability to influence the Lebanese political arena. However, this influence waned in light of Hezbollah’s entry into government.

In the interior Syrian arena, Bashar failed in the treatment of the economy and rural agricultural sector. His father, Hafez al-Assad’s support and strength were primarily based in this sector, supported mainly by the various tribes in central and southern Syria (the al-Horan region). His failure to support the rural area, combined with the severe drought that plagued the area between 2006 to 2011, the rising unemployment rate, and the inability to provide for the middle class and university graduates who did not find adequate employment, composed economic failure that led, among other things, to the outbreak of the uprising and the civil war in 2011.

The foundation of Bashar al-Assad’s regime was also plagued by government corruption. The hegemony of the Alawite community in the army and security apparatus, the continued violation of human rights, and the inability of social mobility, especially among the Sunni community, combined with the events of the Arab Spring and the economic failure described above, led to the outbreak of protest in Syria. Of all places, the protest originated in the heart of Assad Sr.’s power in the Horan area, in the city of Deraa in the Deraa district, spreading from there all through Syria.

The physical involvement of Hezbollah, Iran, and Russia in the Syrian civil war was very significant. It led to the almost complete victory of Bashar al-Assad and the restoration of most of the territories under the control of the Free Syrian Army and various opposition elements, including ISIS.

Iran and Hezbollah have intervened in the Syrian civil war since the beginning of the protests. The interest of the radical Shiite axis was to piously guard Bashar al-Assad’s regime in light of it being part of the axis of resistance, and a vital component of the land corridor meant for the transfer of weapons from Iran to Hezbollah. Further down the line, other reasons and circumstances for the deepening of Hezbollah and Iran’s military, security, and intelligence intervention in Syria arose, emphasizing the creating of a single geographical front against Israel, beginning from the Mediterranean Sea in the West to the triangle Israel-Syria-Jordan borders in the east.

From the beginning of the Civil War, Russia remained a supporter of the Assad regime and did not wish to replace it. As early as 2012, Russia and China vetoed a request by Arab countries to bring Assad’s activities in Syria to a U.N. Security Council debate. Since September 2015, Russia’s physical involvement in Syria has been the primary tiebreaker in the fighting between the Assad regime and opposition forces in Syria. The Russians, in effect, took over the Syrian Army controlling the building and the use of the force.

Since the end of 2017, and once it was clear that control was slowly returning to the Assad regime, Russia and Iran began competing for control of Syria, mainly in terms of their economic, military, and strategic interests. Russia and Iran began contesting each other to determine who would reap the benefits of Syria’s rehabilitation.

Russia, for its part, is focusing on the governmental, military, and economic centers. Russia is less focused on the operative-tactical field, looking broadly at Syria strategically and at Russian interests and regional status and its international struggle with the United States, Turkey, and the West. Hence Russia’s desire to establish a permanent military outpost in the Middle East, in Tartus port and KhmeimimAirport in Latakia.

Through Hezbollah’s support, Iran wants to seize as many military outposts in Syrian territory as possible, serving the interest of the land corridor and building a geographical frontier with Israel. Therefore, the radical Shiite axis headed by Iran is investing considerable resources in its civilian and military entrenchment in the terrains along the land corridor (e.g., the Al-Bukamal area, the Aleppo area, etc.) and in the territories of southern Syria (e.g., the radical Shiite axis’ “commandeering” of Brigade 1, which controls the frontier with Israel). Iran sees Syria as a lever for the tactical and operational field in future activities against Israel while also investing heavily in Syria’s social and religious sphere, establishing religious and educational institutions to strengthen the Shiite faith.

And what about Bashar al-Assad? On the one hand, he is committed to his Russian Iranian and Hezbollah saviors. On the other hand, he does not want to serve his country on a silver platter and serve as a marionette in the struggle between Russia and Iran over Syria’s resources.

Iranian and Hezbollah’s positions are essential and fundamental to Assad. On the one hand, they sometimes do whatever they want in Syria. However, on the other hand, Assad wishes to reiterate the claim that the main enemy of the Syrian people is not the regime itself, as claimed during the civil war, but rather the external “Zionist” enemy, Israel. So the activities of Iran and Hezbollah, even if they sometimes interfere with Assad, serve his interests vis-à-vis his domestic audience, the Syrian people, vis-à-vis the countries of the region such as Lebanon and Hezbollah, and of course vis-à-vis Iran.

Syria, which lost its status among the entire Arab community following the civil war and Assad’s atrocities against his own people (in 2012, Syria was suspended from the Arab League), seeks to regain its position among the Arab international community and to regain its leadership in the axis of resistance to Israel and the United States. Moreover, the weakness of the Syrian Army today only increases Assad’s dependence on Iranian Hezbollah and proxy forces should war break out with Israel.

Russia’s involvement in Syria has a moderating effect on the radical Shiite axis in Syria. Therefore, Russia’s remaining presence in Syria is essential for Israel. In addition, Russia does not limit Israeli airstrikes against Iranian and Hezbollah targets on Syrian territory.

In May 2021, Bashar al-Assad was elected for another term as President of Syria. His re-election with 95% of the vote was obvious and predictable and did not represent any surprise. Currently, Bashar al-Assad’s ability to change the situation of the foreign involvement, returning control of Syria solely back to him, does not exist. Only ostensibly does Assad seem to be in complete control of what is happening in the country. Assad’s fear that Russia will force his replacement in power with an alternative candidate leads to his acceptance of their conditions.

Assad’s central claim since the beginning of the civil war has not altered. Assad accuses the West, Israel, the United States, Saudi Arabia, and Turkey of conspiring against Syria to overthrow his regime. Those who stood by him were Russia, Iran, and Hezbollah. Russia is leading the approach against the U.S.; that is to say, it is a struggle between world powers on Syrian territory. Hence, the commitment to Russia and the strategic alliance with Iran and Hezbollah saved Bashar al-Assad’s regime.

Teddy Sapir is a resident of northern Israel and a research fellow at the “Alma” Center. He is a Ph.D. student in Middle Eastern history at Bar Ilan University, and his research is focused on the Syrian and Lebanese arenas. Mr. Sapir holds the rank of Lt. Col. (Res.) in the IDF’s Intelligence Division.