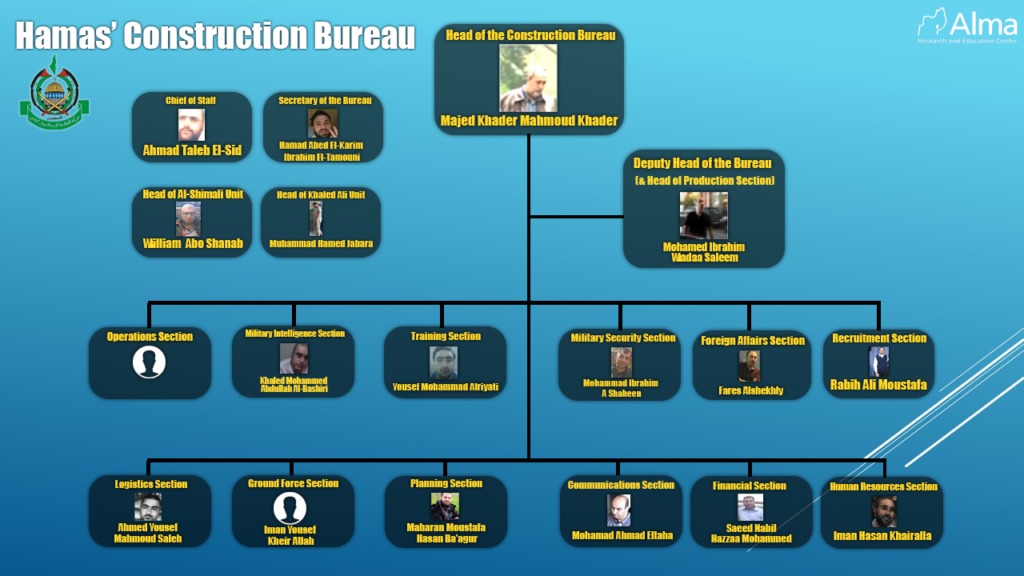 This report exposes the true scope of Hamas’s military activities in Lebanon.
Ultimately, Hamas’s objective is to create an additional front against Israel, which will allow it flexibility and other attack options besides its stronghold in the Gaza Strip.

Based on an array of open sources, the report identifies the principal senior political and military Hamas leaders active on Lebanese territory, the organization’s multiple military projects, and working plans. It also identifies the locations of some of Hamas’s key Lebanese military sites.

Hamas’s ‘Construction Bureau,’ based in Lebanon and Turkey, shapes the organization’s forces in all areas that it operates in – Gaza, the West Bank, and Lebanon. The Bureau contains specialized departments, each responsible for different sets of activities, such as weapons manufacturing, military intelligence, combat training, communications, funding, planning, logistics, security, and foreign relations.

The report explores Hamas’s two operational units in Lebanon – El-Shimali and Khaled Ali. With the assistance of the Construction Bureau, the two operational units recruit members, train them in specialized combat skills such as sniping, anti-tank missile attacks, operating drones, and more. The units also develop and produce their own weapons – rockets, offensive drones, and small unmanned underwater vehicles. And they set up operational cells while preparing attack plans against Israel.

In the past, Israeli officials have openly acknowledged that Hamas is building new fronts against Israel, including in southern Lebanon. Those statements received significant confirmation in recent months. Between May and August 2021, there have been five incidents of Grad rockets from Lebanon against Israel. Hamas’s military infrastructure was likely behind these incidents.

Hamas’s activities in Lebanon occur with the assistance and supervision of the Iranian Quds Force, specifically, its Palestine Branch. But that fact doesn’t reflect the full story. Hamas’s relations with Iran – and with Hezbollah – have known their ups and downs – and that’s an understatement.

Hamas’s constant force build-up in Lebanon has the potential of creating a severely difficult challenge for Hezbollah. Hamas pursues its own interests in Lebanon, including not informing Hezbollah ahead of time when the Hamas fires rockets into Israel – a pattern that could drag Hezbollah into a war with Israel, against Hezbollah own interests.
For Israel, the time has come to stop viewing Hamas as separate Gazan and Lebanese entities and to view the organization as a single return address for any necessary future retaliation for Hamas aggression. Precise Israeli action against Hamas in Lebanon actually matches Hezbollah’s interests.