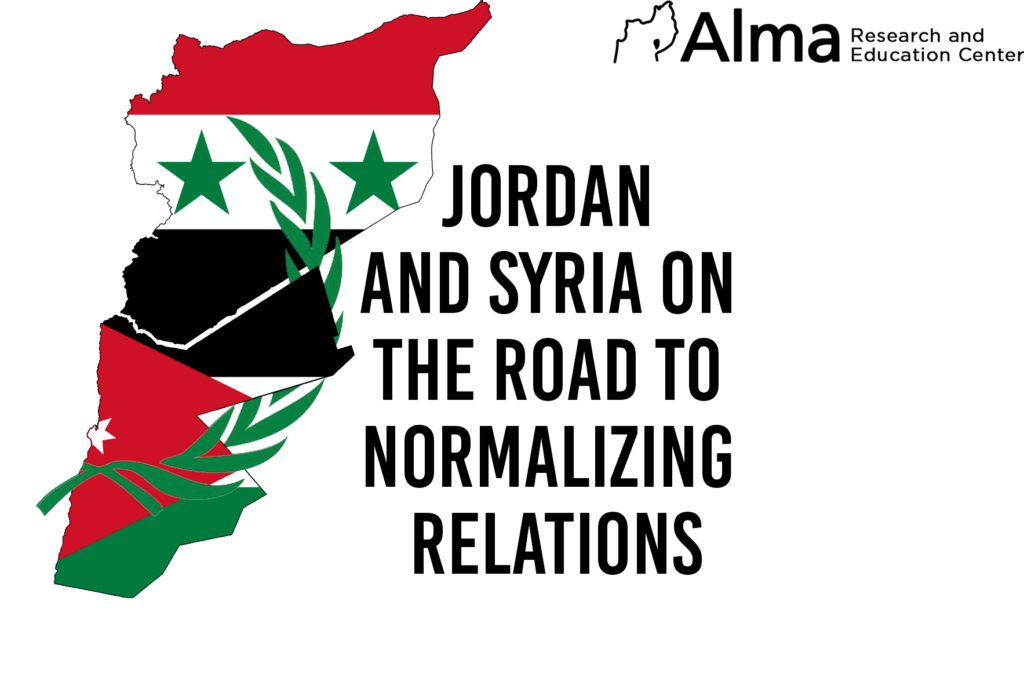 In recent months, there has been a substantial Jordanian effort to restore normalization with Syria. The Arab Spring and the Syrian civil war led Jordan and Syria’s relationship to an unprecedented low, preceded by a breach in their diplomatic relations. When the events in Syria began in 2012, Jordan condemned the Syrian regime’s actions against its citizens, recalling its ambassador from Syria while still maintaining their embassy. On May 26, 2014, Jordan expelled Bahjat Suleiman, the Syrian ambassador, apparently following remarks he made in condemnation of Jordan aiding Syrian rebels. The Syrians, in response, symbolically expelled the Jordanian representative from Syria, seeing as he was no longer physically in Syria.

At the same time, hundreds of thousands of Syrian refugees fled to Jordan from war-torn areas. The areas near the triangle Jordanian, Israel, and Syrian border – were liberated by opposition elements. The area, east of the city of Daraa, on the outskirts of Swaida, was also conquered by the Syrian opposition. The city of Daraa up to the Nassib-Jaber border crossing remained under the control of the Syrian regime. In 2015, opposition elements conquered the border crossing and parts of the city of Deraa.

Jordan initially refrained from allowing operatives from the Syrian opposition to act against Syria from Jordanian territory. This was mainly due to fears that if the Assad regime fell, the administration would fall into the hands of the Muslim Brotherhood, which could inevitably lead to a strengthening of this trend in Jordan and threaten the stability of the Hashemite kingdom. In 2015, Jordan’s fears increased once the border triangle area of ​​Syria, Jordan, and Israel was conquered by ISIS supporters, Jish Khalid ibn al-Walid. Jordan was very concerned about the spreading of ISIS’s Sunni extremism into Jordanian territory.

In 2014, the situation on the Jordanian-Syrian border worsened because of the lack of unity between opposition elements on Syrian territory. Syria had become an extremist Islamic jihadist arena such as the Al-Nusra Front (Al-Qaeda) and ISIS.

In light of the fear of the spreading of Sunni extremism into Jordanian territory, Jordan agreed to establish a joint operations and coordination center, including the many countries involved in Syria. This center, termed the Military Operations Center (MOC), involved western countries such as the United States, Britain, France, and Arab countries such as Saudi Arabia and the United Arab Emirates.

This operations room operated on Jordanian soil and was managed by Jordanian intelligence authorities. The operations room made it possible to deal with all opposition factions on the ground. Through it, funds, logistics, and weapons were transferred, courses and advanced training were conducted on Jordanian soil, and instructions were passed on to field officials and intelligence gathering for the defense of Jordan.

This support continued as long as the threat on Jordan from various opposition elements existed and even intensified.  This occurred while Jordan dealt and treated hundreds of thousands of Syrian refugees who had relocated to northern Jordan since the commencement of the fighting in Syria, congregating them into the main refugee camps in Zaatari and Mafraq.

In 2021, the number of Syrian refugees was estimated at one million and four hundred thousand people, about one-tenth of the Jordanian population. Syrian refugees in Jordan are a massive burden on the Jordanian economy regarding the water sector, employment, and social care. Some refugees began working in free professions, while some left the refugee camps reaching Jordanian city centers. This has a heavy economic impact, given the competition for jobs among young Jordanians, which means the unemployment of Jordanian citizens, creating poverty and resentment towards the central government.

Another significant implication is the demographic matter. The Jordanian goal is to return most, if not all, refugees to Syria. Over the years, however, marriages have formed. Young Syrian women married Jordanian citizens. This demographic issue undermines the internal security and stability of the kingdom. The Jordanian government fears radical Islamic elements, such as the al-Rukban refugee camp, the easternmost on the Syrian-Jordanian border, from which attacks against the Jordanian security forces have originated.

Russia’s military entry into the Syrian civil war in 2015 was a tiebreaker, which helped the Syrian army, together with the Iranian Quds Force and Hezbollah, regain slow and gradual control of all territories in Syria, including reconciliation agreements on the Syrian-Jordanian border during 2018. The Jordanian understanding was that Assad was there to stay, with Russian and Iranian support. Hence, Jordan agreed to the Russian moves and the withdrawal of the West’s support of the opposition.

Today, the security situation in Deraa province, which borders Jordan, is still unstable. However, in recent months we have witnessed Jordanian steps toward normalization and the return of normal relations with the Syrian regime led by Assad. As early as December 2019, Jordan planned to renew its diplomatic ties with Syria. It was then reported that a delegation headed by former Jordanian Prime Minister Tarek al-Masri and Agriculture Minister Samir Habashneh would go to Syria to re-instate relations between the two countries since they have common interests. In the background, other Arab countries (such as the United Arab Emirates) have also begun to promote normalization relations with Syria.

In July 2021, King Abdullah visited the United States. He met with US President Biden, who presented a plan for resolving the crisis in Syria, including normalization with Arab countries and exempting Jordan from the “Caesar Act”.

On September 19, 2021, Syrian Chief of Staff Ali Ayoub arrived in Jordan and met with Jordanian Chief of Staff Yusef Al-Huneiti to coordinate the common border’s guarding and fight terrorism (including drug smuggling, which is a very troubling issue to the Jordanians).

On October 03, 2021, Bashar al-Assad and King Abdullah spoke by phone. In the conversation, they discussed relations between the two countries and how to strengthen their cooperation. Jordan’s King stressed his country’s support for efforts to safeguard Syria’s sovereignty, stability, and territorial integrity.

At the economic delegations’ meetings, it was agreed to reopen the Jaber – Nassib crossing, which was closed in April 2015 after Syrian rebels occupied the area, reopened in October 2018 after reaching reconciliation agreements in the region closed again due to the coronavirus in 2020. In practice, the crossing officially opened on October 29, 2021, and the free trade zone was opened at the crossing. It was also agreed to resume flights between Amman and Damascus from the start of October 2021 (this has not yet been implemented). The opening of land and air border crossings will significantly contribute to the stimulus of the Jordanian and Syrian economies.

The normalization to which Jordan aspires to maintain with Syria is a slow and safe restoring of the relations between the two countries. The main reason is the security and stability of the Jordanian kingdom. Jordan realized that it had to cooperate with the Syrian regime to ensure its safety from the north. King Abdullah is concerned about the Iranian military presence in southern Syria and the Shiite militias located in the region. At the same time, Jordan is worried about the continued violent struggles in the Deraa region adjacent to their border, violence that resumed on July 21. The Jordanians are adhering to their efforts to prevent the spreading of radical Islamic elements such as ISIS cells into Jordan, the smuggling of drugs, weapons, and terrorist operatives, both Sunni extremists and Iranian militias, who might relocate from Syrian territory into Jordanian territory, seeking to attack American and Israeli targets on Jordanian soil. In August 2021, King Abdullah contacted Russian President Putin, who advised him to discuss this with Assad.

The renewal of ties, of course, is due to economic and commercial contexts. Restoring operations at the border crossing is very important for reviving economic activity between Jordan and Syria. Both sides have a clear financial interest in driving the economy in their countries. The closure of the border crossing during the civil war caused billions in losses in the Jordanian economy. Jordanian farmers were also affected by the inability to transport goods to Syria and Lebanon. Jordan’s ability to export its goods to Syria, Turkey, Lebanon, and Eastern Europe has also been affected. This situation put a crimp in Jordan’s ability to import cheaper goods from Syria and transfer goods to the Gulf states via the port of Aqaba. At the same time, the ability to transport goods from India and China via the port of Aqaba in Jordan and from there by land to Syria, which is a cheaper route than the sea route to the port of Latakia, was compromised.

Another major economic issue is the laying of the gas pipeline from Egypt through Jordan to Syria and from there to Lebanon (see a separate article published by us: Link).

Another reason for restoring relations is the return of Syrian refugees to their country, which will create relief for Jordan’s resources and economy.

The water problem that the kingdom suffers from is also fundamental since the water streaming into Jordanian territory originates from the al-Yarmouk and the al-Ruqqad Rivers in Syria. At the same time and only recently (October 21), Israel signed an agreement to increase its water supply to Jordan.

The Syrian interest in renewing relations with the various Arab countries in general and Jordan, in particular, comes from Syria’s desire to return to the Arab League (from which Syria was suspended in November 2011), and of course, to return to being a dominant state and restore its regional role, as it was before the Arab Spring. The Arab media have already reported an intention to invite Syria to the Arab League summit in Algeria in March 2022.

There is an assessment among the moderate Arab countries that Syria’s re-acceptance to the Arab League and the normalization of relations with various Arab countries, such as Jordan, the United Arab Emirates, and Bahrain, will lead to Syria’s distancing from Iran. However, in our assessment, the Assad regime will not hasten to abandon its Iranian allies since they saved its rule, together with the Russians. At the same time, the moderate Arab states aided the opposition.

Teddy Sapir is a resident of northern Israel and a research fellow at the Alma Center. He is a Ph.D. student in Middle Eastern history at Bar Ilan University, and his research is focused on the Syrian and Lebanese arenas. Mr. Sapir holds the rank of Lt. Col. (Res.) in the IDF’s Intelligence Division.