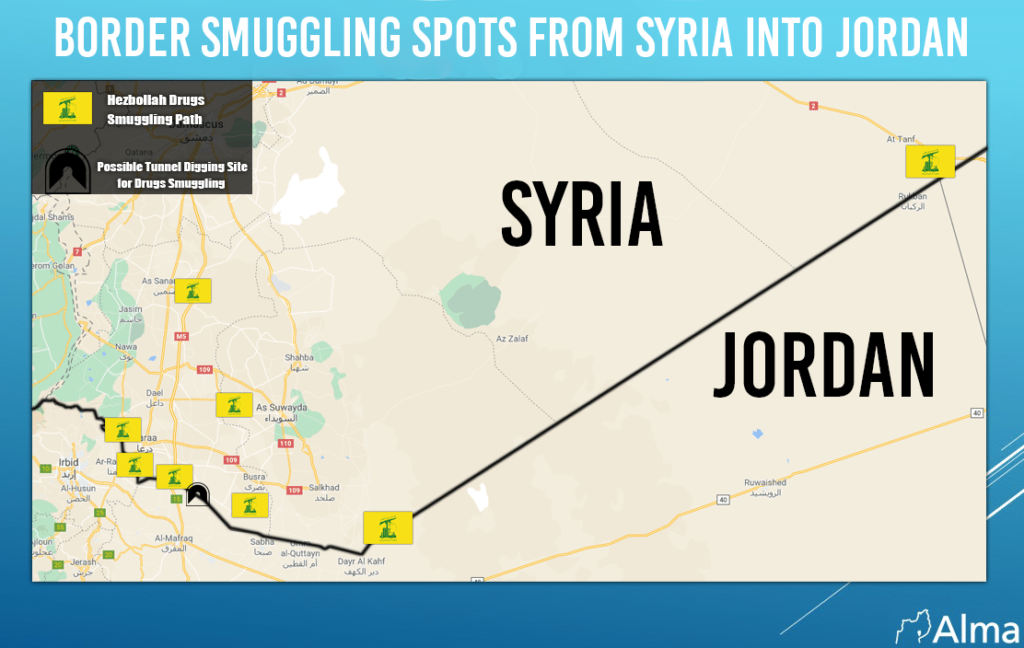 There is a strong link between drugs and terrorism. Similar to southern Lebanon, also in southern Syria, the activity of the drug platform enables the activity of the terrorist platform against Israel. For example, intelligence gathering for drug smuggling activities will be used as intelligence for terrorist activities in the future. The people involved in manufacturing, distributing, and smuggling drugs are the same people who will carry out terrorist activities in the future or will be involved in arms smuggling for terror activity inside Israel as well. In addition, the money from the drug activity is used to fund terrorism.

This report relates to the land corridor of drug smuggling between Lebanon and southern Syria (mainly of synthetic stimulant pills similar to Captagon and its type) and to the air-to-land corridor supplying raw materials from Iran. The report also reviews the various smuggling routes from southern Syria to Jordan, from which the drugs are distributed to Israel, Saudi Arabia, the United Arab Emirates, the far east, and from there to Africa and Europe. The report details a number of prominent Lebanese figures related to the production and distribution of the narcotics, and to dozens of local Syrians who serve as traffickers and smugglers. In this report, we identified two Syrian hauling companies collaborating with Hezbollah in transporting the drugs and the raw materials. At the end of the report, we describe the local resident’s struggle against the drug industry in their area including several examples where the smuggling into Jordan was thwarted. From these examples, we can learn about the sheer scope of the drug industry activity under the auspices of the radical Shiite axis headed by Iran conducted in southern Syria.

Senior Hezbollah figures and Shi’ite clerics speak out against the “drug plague”, raising the need to denounce drugs in order to protect civil society. Hassan Nasrallah himself has spoken out on the drug issue quite a bit. For example, in 2016, Nasrallah spoke before the council of the Ashura, emphasizing the growing danger of the drug plague, and the need to combat it and prevent the corruption of society’s values; “People face dangers no less important than the security threat, including drugs”, Nasrallah stated. “We can wake up to a very big disaster, and the number of drug addicts is terrifying. I appeal to the drug dealers, stop killing and destroying teenagers… the drug issue is one of the hardest to deal with”. In 2018, Nasrallah responded to accusations accusing Hezbollah of drug trafficking. Nasrallah categorically denied the accusations, claiming that; “Hezbollah has a very clear religious position that drug trafficking is forbidden and it is a great sin. We forbid drug trafficking”. However, Nasrallah neglected to mention that religious rulings by Shi’ite clerics allow the dealing of narcotics intended for other nations considered hostile. As far as Hezbollah is concerned, the drug industry is also a vital economic business that contributes to the organization’s budget, as well as a religious decree against various peoples, religions, and communities, with the recipient of the drugs being, Sunni Muslims (Saudi Arabia, the Gulf nations and in Syria itself), Christians (Europe, South America, the United States) and Jews (Israel).

Hezbollah does not really act against the drug industry, despite its senior figure’s statements. The drug industry is an integral part of Hezbollah’s activities worldwide and is one of its main financial incomes.

Southern Syria is considered a strategic area for the radical Shi’ite axis headed by Iran in general and for Hezbollah in particular, the development of the drug infrastructure in this region pays off twice: It enables economic maintenance of its proxy in the region (which produces terrorism against Israel) while also increasing the potential smuggling routes and the amounts of smuggling to the east (and from there to other parts of the world, to the African continent and from there to Europe). As a result, financial revenues increase.

Following the reconquering of southern Syria, the radical Shiite axis led by Iran began to establish a military and civilian presence in the region taking control of it. The establishment and takeover also included the development and empowerment of the drug smuggling routes, as well as the development and empowerment of Hezbollah’s drug production industry in southern Syria. The narcotics scheme in southern Syria allows the radical Shiite axis to generate a monetary benefit for those who cooperate with it in terms of military and civilian entrenchment. The radical Shi’ite axis has created and empowered economic solutions able to finance its activities in the form of the drug industry, in light of the impact of western sanctions.

There is a great financial benefit for the proxies of the radical Shiite axis led by Iran, mainly to the 36 local militias in southern Syria that operate as mercenaries under it. These militias are a central pillar of the drug industry. They deal in smuggling, distribution, manufacturing, trade, and security. (See the special report we published regarding the local militias).