Mowing the Lawn in Syria – Israel and USA War Between Wars 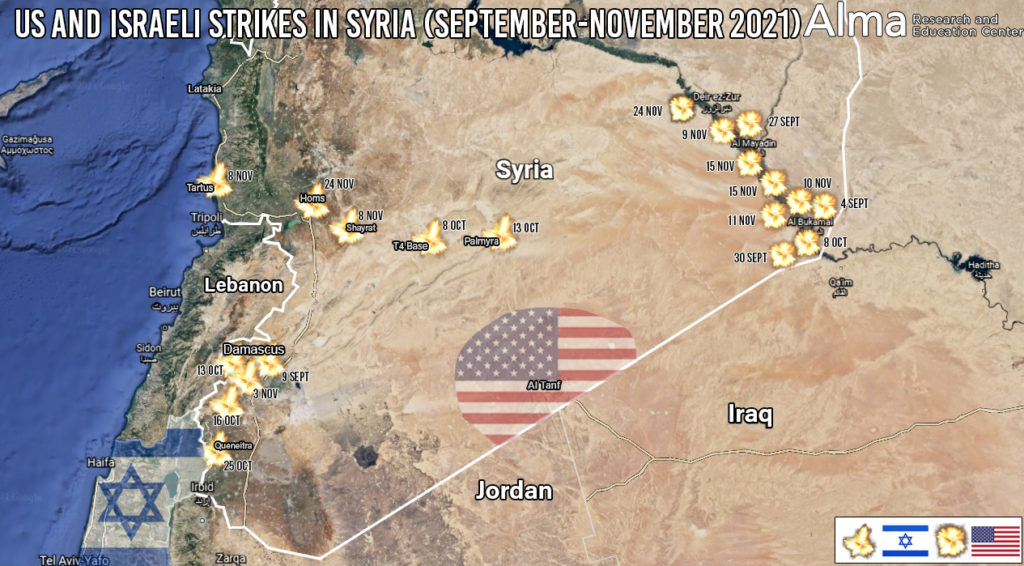 In the last three months (September to November 2021), we were able to monitor at least ten “silent” airstrikes carried out against targets of the radical Shiite axis in the al-Bukamal area of eastern Syria. The al-Bukamal region is a strategic area within the land corridor of the radical Shiite axis headed by Iran. As a result, Iran’s military and civilian hold on the region is absolute.

In our assessment, there is an organized division of responsibility between the United States and Israel for attacking targets related to the activities of the radical Shiite axis headed by Iran in Syria. In every sector, the purpose of the attacks is different.

The “quiet” sector (“The American sector”) is geographically defined within eastern Syria and includes al-Bukamal, al Mayadin, and Deir ez-Zor.

Attacks within this sector are the responsibility of The United States. The main objective of the attacks in this sector is meant to disrupt the entrenchment of Iranian-linked forces near the land corridor route.

The “noisy” sector (“The Israeli sector”) is geographically defined within the central, northern, and western parts of Syria, focusing on the Damascus area, the Palmyra area – Homs, and the Latakia-Tartus region. Attacks within this sector are the responsibility of Israel. The main objective of the attacks in this area is to strike special weapons and prevent them from being transferred to Hezbollah in Lebanon (precision missiles, Iranian surface-to-air missile systems, air defense systems, UAVs, cruise missiles, etc.).

In our assessment, there is also likely to be quite a lot of Israeli activity in the “American sector” in eastern Syria.

In addition to the two sectors above, there is another geographically defined sector adjacent to the Israeli border in southern Syria. This sector also falls under “Israeli responsibility,” the objective of its offensive activity in this sector is mainly to cause harm to terrorist infrastructures established there by Hezbollah (the “Southern Command” and the “Golan File” units).

We have several indications showing attempts by the radical Shiite axis to minimize damage. On November 10, a meeting was held between the leaders of the Shiite militias and their Iranian Revolutionary Guards mentors and Russian commanders at the T4 base located between Palmyra and Homs. Members of the radical Shiite axis urged the Russians to try to rein in Israeli attacks or at the very least establish Iranian and Russian joint bases. The Russians refused, noting that it was vital for them to maintain the independence of their forces in Russia. The Russians agreed to military cooperation only in the context of fighting ISIS.

At the same time, the Shiite militias in eastern Syria and the border area with Iraq began removing identifying Iranian signs from their headquarters and replacing them with the Syrian regime flag. In addition, we are witnessing the transfer of armaments from place to place, hiding them in new sites. The Iranians also asked representatives of the Syrian army to ensure that there would be no significant Syrian forces activity near the bases associated with the Shiite axis to make intelligence surveillance more difficult.

Rocket attacks against American bases in northeastern Syria are also part of the radical Shiite axis’ response. The last of which occurred on 23 November. Five rockets were apparently fired by Shiite militias at “Harab al-Jair” military airport, which serves as a U.S. base in the Hasqa (الحسكة ) region of northeastern Syria.

Attributed to the USA

16/10 – Southern Syria: Elimination of the Saleh Madhat in Ein Athina near Khachar

24/11 – West of Deir ez-Zur, a drone hit a vehicle and killed two Hezbollah Iraq members, and injured two others.