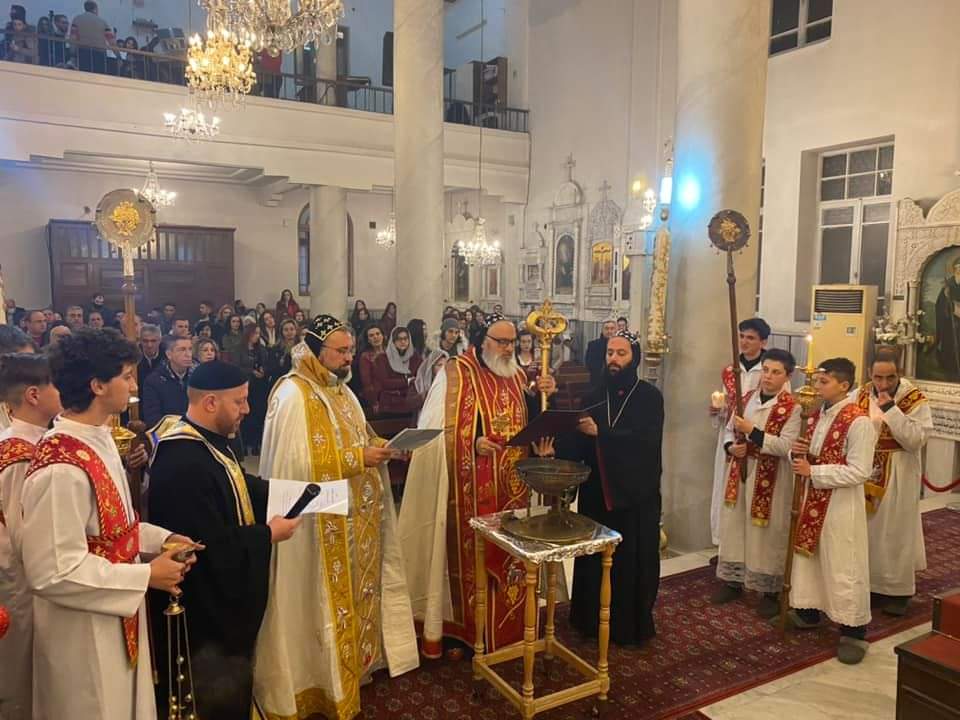 The Arab Spring in Syria, which began in March 2011, did not skip over the Christian population in the country. Until the Syrian civil war, the Christian minority (with its various denominations) enjoyed a relatively good social status, a reasonable economic situation, and social mobility, together with the Alawite and Druze minorities. The Christians took on the political principle position of Arab national secularism for coexistence among all ethnicities. Assad Sr. and his son used the minorities to form their political system. Christians maintained a completely free lifestyle, had no governmental restrictions, had freedom of worship, had the liberty to build churches and schools, causing them no reason to emigrate from Syria or seek humanitarian asylum. Despite this, most of the immigration from Syria was from the Christian population, mainly due to economic reasons and job opportunities and not because of ethnic reasons. The estimated percentage of Christians in the Lebanese population in 1967 was about 30 percent).

Before the Syrian civil war – the country’s Christian population accounted for about 10 percent of the population – about 2.2 million people of the country’s total population. Currently, in 2021, the number appears to be only about one and a half million people, some claim of even less. This is in light of internal migration (displaced persons) due to the occupation of territories by radical Islam, external migration (refugees) to European countries, and deaths from fighting and battles in their residential areas. However, there is no official government estimate of the number of Christian community members currently in Syria.

Syria’s civil war had caught the Christian population between a rock and a hard place. On the one hand, they are a minority that would prefer to adhere to the ruling minority, which promoted a regime with a secular ideology and cling to it to protect them from the Islamic extremists, particularly ISIS and the Al-Nusra Front. On the other hand, Christians should remain neutral if Bashar al-Assad’s regime should fall; therefore, they must refrain from picking sides.

At the beginning of the revolution, some Christians took a neutral approach. Others took part in popular demonstrations in areas within the strongholds of the revolution, for example, in Daraa. With the continuance of the civil war and the involvement of radical Islamic elements, emphasizing the Al-Nusra Front and ISIS, most Christians expressed their almost full support for Bashar al-Assad’s regime. The Christians sympathized with Assad’s Alawite regime as an ethnic minority and because of a grave fear from an extremist Islamic rule and for economic motives and interests. The Syrian regime tried to arm the Christian populations and encourage them to join the Syrian security forces, but many Christians preferred to send their children abroad rather than die on the battlefield.

Most of the Christian population moved to regime-controlled areas during the civil war and did not remain in battle zones occupied by the Free Syrian Army or Islamic extremists. Within the regime’s territories, they remained in a familiar and safe place compared to areas where they did not know what would become of them. However, not all Christians in Syria agreed upon the situation, certainly, not like the other ethnic groups. Some wished to replace the Assad regime and gain an open democratic government, some remained neutral, and some supported the current regime.

In the area of Deir al-Zor and Al-Raqqah, occupied by ISIS, Christians were faced with the options of conversion to Islam, payment of ” Jizyah” (a tax according to Islam on non-Muslim subjects who must pay the Muslim ruler), or banishment from their homes. The city of Homs was almost completely emptied of its Christian inhabitants. The Idlib province, now a stronghold of the Syrian opposition, has also been almost completely emptied of Christians. In the Daraa district, most of the Christians have left; in the Sweida area, there are few villages left with a Christian population. The Vatican issued a statement expressing concern regarding the situation of Christians in Syria. The Vatican claimed that Christians in Syria are being persecuted, genocide is being perpetrated, the Christians are being deported from their homes, and in several areas in Syria, any evidence of Christian culture is being obliterated as part of an ethnic cleansing carried out mainly by ISIS.

Some Christians were arrested by regime forces, accused of aiding and abetting opposition elements, imprisoned, and tortured. Many Christians died in battles at both the hands of the opposition and by the Syrian regime and its proxies. The Christians were harmed by both the regime and the opposition, as much as any other ethnic group. Although few community members were involved in opposition politics, the Syrian opposition was unable to entice the Christian community to follow them, just as it failed to attract members of the Druze community and was unsuccessful in its attempt to make it clear that it had a desire for coexistence.

On his part, Assad recognized the reluctance of Christians to empathize with the opposition, using this to continue to win the support of the minorities, playing the ethnic card to safeguard his interests and preserve his regime. In regime-controlled areas, Assad often visited Churches and the Christian communities (for example, in 2014, he visited the village of Maaloula on Easter just a few days after the regime reconquered it from the opposition), to show the Western world that he, unlike ISIS and the opposition, cares for minorities and is the only legitimate regime in Syria. One of the Christian population’s allegations is that Assad took them hostage by presenting them as his protégés and his allies when it is very clear that he is not their friend. There is no doubt that Assad’s strategy towards the Christians prevailed in the West, especially after seeing the attempted massacre of the Yazidi people. Given that the western world is mostly Christian, they wished Christians in Syria not to be harmed by radical Islamic elements. This may be why we did not see intense (at least public) western support aimed at overthrowing the Assad regime.

During the Syrian civil war in areas where Christians were under opposition control, they rarely celebrated their holidays, lest it might cause them harm in light of their being “branded” as associated with the Assad regime. About 60 percent of Christian prayer houses were destroyed during the war, both in regime-controlled and opposition-controlled areas. In regime-controlled areas, such as Damascus and Aleppo, the Christian population modestly celebrated their holidays indoors in a quiet manner.

In 2018, when the Syrian regime sensed that victory was more certain, Christians returned to celebrate Christmas, priding themselves by placing a giant Christmas tree at the Sayidat Saidnaya (Our Lady of Saidnaya) Monastery on the outskirts of Damascus. A festival and a parade were held in the Old City of Damascus, while shops selling Christmas decorations were opened. Aleppo and Al- Sweida also celebrated the holiday. The head of the Syrian Orthodox Church hailed praise and glorification that this was a holiday commemorating the victory over the terrorist organizations in Syria.

Christmas 2021 is celebrated in the shadow of great sadness and pain in light of the dire economic situation in Syria. Hardly any holiday lights or Christmas decorations are seen in Damascus. Although Christmas trees were positioned in Church squares, much fewer can be seen this year; people rarely purchased Christmas trees and decorations for their homes. Videos posted online show that on December 25, 2021, holiday masses and festive prayers were held at the Deir Mar Georges (Saint George) Monastery Cathedral and at the Orthodox Church of St. John in Damascus.

The population of the Christian community in Syria has declined significantly throughout the years of the country’s civil war. Given being a minority with mobility capabilities and the ability to assimilate on the one hand and their acceptance on the other, Christian communities worldwide facilitated the migration of Syrian Christians to Europe and the Americas.

The difficult economic situation in Syria in recent years, the sectarian persecution and the real and unequivocal fear of the fall of the regime and the fall of Syria into the hands of extremist jihadists, the feeling of insecurity, displacement from their places of residence due to the fighting between various elements, all caused the Christian community to decline within a decade to half of its number at the beginning of the civil war. There is no doubt that this social change will have a long-term impact on Syria, which has experienced many demographic upheavals throughout the years of the civil war.