Commemoration of Qassem Soleimani – Two Years Since his Assassination (January 03, 2020) 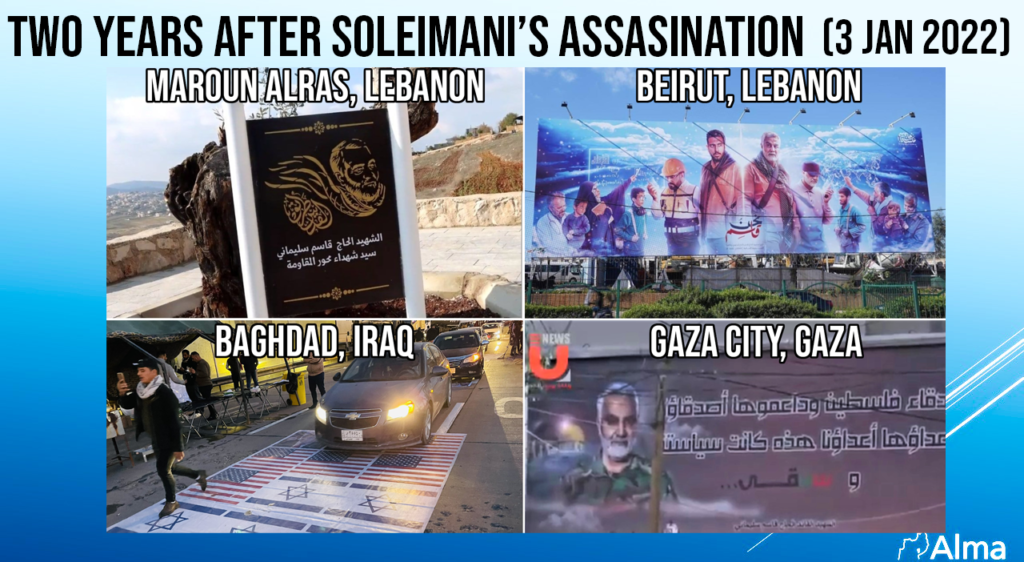 Qassem Soleimani was killed in Iraq by a U.S. UAV strike on January 03, 2020. As commander of the Quds Force, which is the fighting arm of the Revolutionary Guards outside Iran. Soleimani’s death was a severe operational and moral blow to both Iran itself and its many supporters and those supported by Iran (the various proxies) and cultivated by Soleimani: from Yemen to Syria, from Afghanistan to Lebanon.

At first, his commemoration carried the usual characteristics expected to commemorate such a figure. Posters glorifying his dying as a martyr and being a “living martyr” – a man who had been at risk and in the eye of the storm for many years. The most prominent physical commemoration was established in Lebanon, in Maron a-Ras in a place called the “Iran Garden,” overlooking the northern territory of the State of Israel. The memorial complex includes a small model of the Al-Aqsa Mosque in Jerusalem, well-maintained gardens, and sports facilities.

Shortly after Soleimani’s death, a statue of Soleimani pointing toward Israel was erected. Since then, ceremonies in his honor and memorial events for the Martyrs or Iranian leaders such as Imam Khomeini and Nakba Day ceremonies have been held there.

The construction of the statue did not go unruly without criticism. The mayor of the nearby municipality of Debel, whose majority of its population is Christian, said that such beautiful gardens should be called the Gardens of Lebanon or Maroun el-Ras Gardens.

Leading up to the second anniversaries of Soleimani’s death (Similar to the first anniversary), Hezbollah hung posters and pictures with Soleimani’s image very close to Beirut International Airport. Many Lebanese who recently landed at the airport for Christmas and the New Years’ holidays resented these displays claiming that they intended to go to Beirut, not Tehran… Another Lebanese tweeted: “The official name of the airport in Beirut Rafiq al-Hariri, but in practice, the name is Qassem Soleimani Airport in the state of Hezbollah.

Hezbollah recently launched another commemorative project through its affiliated Building and Development Fund, “Jihad al-Bana.” As part of the project, tree saplings will be distributed to cities and towns throughout Lebanon and planted in memory of Soleimani. The first tree in the project was planted on December 20, 2021, in the town of Derdghaya in Nabatiyeh province in the presence of MP Sheikh Hassan Izz a-Din under the slogan “trees protect land and people.”

In addition to the erecting of statues, hanging of signs, planting trees, memorials, and speeches, there is a huge commemorative activity for Soleimani on the Internet and on social networks.

The commemoration takes on a variety of features. Part of it is of a routine nature that glorifies the span of Soleimani’s mighty influence and the fear he instilled in the heart of the enemy leaders – “The Great Satan and the Little Satan.” It is worth noting that although Suleimani was killed during the office term of other leaders heading the U.S. (former President Trump) and Israel (former Prime Minister Netanyahu), the announcement in memory of Suleimani was updated in line with developments and political changes that have taken place.

Soleimani’s commemoration is also inspired by how he was described in U.S., Israeli, and moderate Sunni countries’ media. At the time, Soleimani was portrayed as a multi-armed octopus who orchestrated all the Iranian Quds Force actions throughout the Middle East.

Soleimani, as commander of the Quds Force, has been a lifelong target of his enemies’ attempts to harm him. Therefore, details of his personal daily life and those of his operational activities were not common knowledge. His photographs were published sparingly and under close supervision, and almost nothing was known about the man behind the title – commander of the Quds Force. As like the period after the assassination of Imad Mughniyeh in 2008, details and images of Soleimani that were never allowed to be published in his lifetime for security reasons were made public after his death.

The most interesting commemorative project of the year appears to be published in the networks under the title “فقط لأجل الله” and in the transcript – “Faqat Li’ajl Allah” which means “Just for God’s sake.” As part of the project that is in the genre of “Friends Talk About,” illustrations depicting scenes from Soleimani’s life are presented. The illustrations deal with his private life, his way of life as a military-political leader, and his life as a field commander among his combatants. The images were partly created (especially those regarding the aspects of Soleimani’s military vocation) from edited still photographs made to resemble paintings, while some of the sketches were drawn from scratch describing a private scene from his life, a scene that was never photographed in real-time.

The illustrations describe Qassem Soleimani as a humble man and a people person. Starting with the family circle, through his treatment of martyrs families and the wounded of the various military campaigns he participated in and towards his soldiers. The drawings describe Soleimani as a “down to earth” man, who despite his senior position and control over the fate and lives of many, that never shied away from the simplest of chores, even though he was never documented engaging in such chores in real-time (documentation which could have served him politically).

The illustrations, of course, do not contain any criticism of the man or his legacy. Soleimani is presented as a person who has not forgotten the simple agricultural background from which he came, so he cares even for animal rights. Soleimani is presented as a sensitive person who has humane feelings even towards his enemies. Although we cannot know if there is truth in all these descriptions, it is interesting that his commemorators chose to describe him even after he was killed by his bitter enemies.

We found it appropriate to present you with several illustrations with a literal translation of the quotes attached to them, which in our opinion, represent an extensive picture of this special commemorative project (our comments are in brackets):