Was Qassem Soleimani Filmed in a Hamas Tunnel in the Gaza Strip? 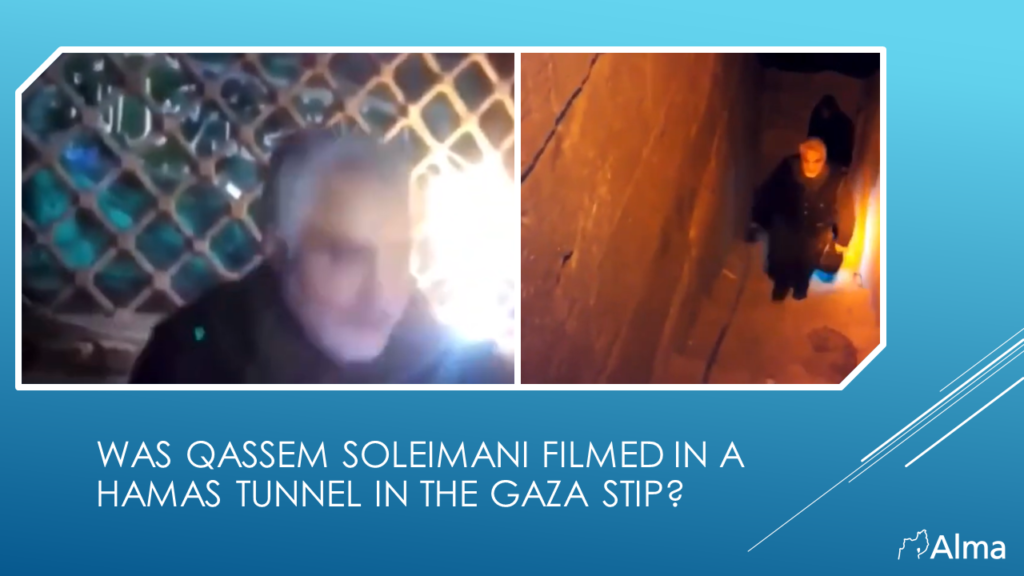 In the past 24 hours, a video was released showing Qassem Soleimani (former Quds Force commander targeted and killed on January 03, 2020) inside a tunnel. Most sites the video was posted on stated it to be a Hamas tunnel in Gaza. Over the past few years (before and after Soleimani’s death), we have been familiar with several reports and indications that Soleimani secretly visited the Gaza Strip, including public statements made on the subject by senior Hamas representatives. (For example, a statement by a Hamas representative in Lebanon).

We tried to test through audio and visual analysis; where was the video filmed? Was it indeed photographed in a Hamas tunnel in Gaza?

The audio analysis of the video (the dialect in which the subjects are heard speaking) did not lead us to any findings.

As to the visual analysis, you can see at the end of the video (second 12) a green poster behind Soleimani’s back that reads “Muhammad Rasool Allah” (“Muhammad the Messenger of God”). The green color usually characterizes Sunnis in general and is recognized as the color of Hamas in particular.

As for the text on the green poster, it’s a common Muslim religious slogan. Shiites tend to add (not always and not necessarily) the words; ” Wa’ali Wa’asi Allah” (“And Ali who follows the path of God”); these words are not visible on the poster.

Circumstantially, it is difficult to deny the claim that it is a Hamas tunnel in Gaza. On the contrary, the visual signs and the reports, indications, and statements from the past reinforce this claim. However, we do not yet have conclusive proof that Soleimani did physically make it to the Gaza Strip and was indeed photographed there in a Hamas tunnel.