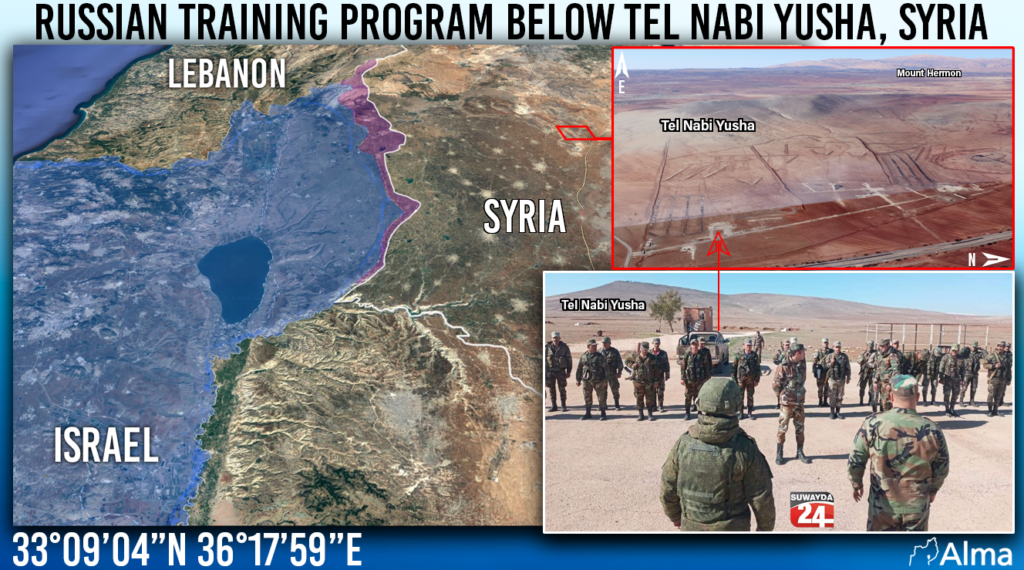 Recently there has been growing Russian involvement in the 1st. Corps of the Syrian Army that is responsible for southern Syria. The bellow photo shows a Russian officer (wearing a vest and helmet) assisting in the training of the Syrian Army’s 1st. Corps in a training ground located at the foot of Tel Nabi Yushu. Tel Nabi Yusha is south of Damascus, on the road linking Damascus to the city of Daraa, near the town of Jabab. We know that there is a military base on Tel Nabi Yushu that also has Iranian and Hezbollah presence.

A few days ago, several Russian officers visited the Headquarters of the 1st. Corps, meeting with Liwa (Maj. Gen.) Mufid al-Hassan, the commander of the Corps. The meeting dealt with the 1st. Corps deployment and training program and the drug smuggling on the border with Jordan.

The Russians appear to be trying to increase their influence on the 1st. Corps deployed in the southern Syrian region at the expense of Hezbollah’s Southern Command unit. Members of Hezbollah’s Southern Command unit are deployed in all the Corps’ units and their objective, among other things, is to inaugurate and assist the commanders of the Corps. So far, the Russians have tried to exert their influence in southern Syria mainly through local proxy forces (“the 5th. Corps”) and through minor “Military Police” forces.

In the photos below, the Russian vehicles (SUV) painted in the colors of the Russian flag (white/blue/red stripes) can be seen parked in front of the Headquarters of the 1st. Corps, adjacent to the commander-in-chief’s office building: