Damascus Intl. Airport – Iranian Activity Reconstructing the Runways and the Connection to the Israeli “CBW” (campaign between wars) 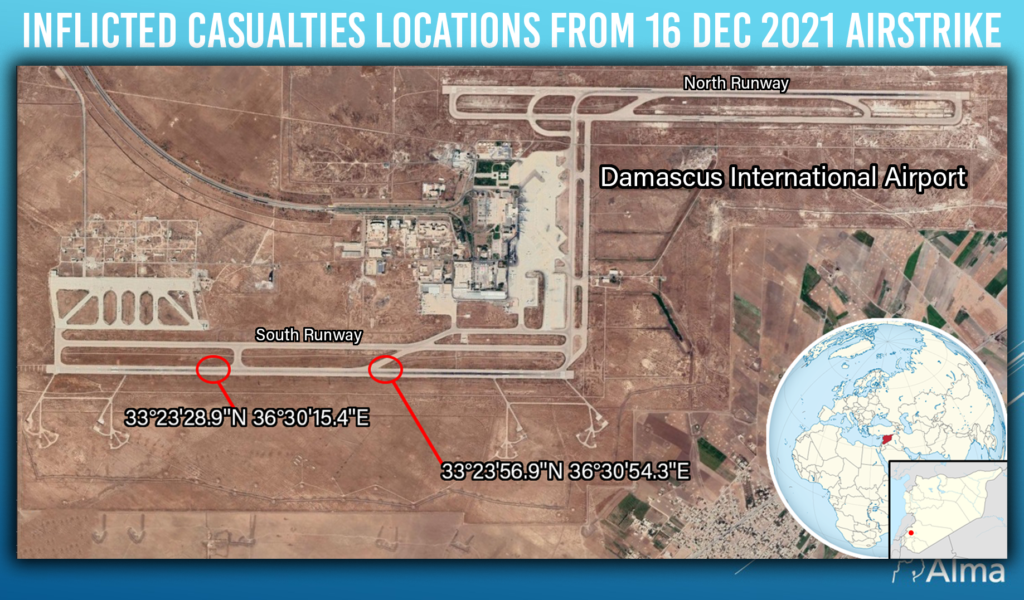 Iranian engineers operating under the Revolutionary Guards’ auspices are overseeing the reconstruction of the southern runway at Damascus International Airport. The southern runway serves as a landing site for Iranian cargo planes that carry arms to Syria as part of the “air corridor.” In 2021, the runway was damaged several times and was shut down. It is claimed that the damage was caused by Israeli airstrikes.

Reconstruction of the runway began in September 2021 and was expected to end by the end of 2021, but another airstrike on December 16, 2021, hit two sections of the runway which delayed the completion of its restoration (See red circle markings in the aerial photo of the airport).

It should be noted that Iranian cargo flights have not stopped. The 747s operating under the auspices of the Revolutionary Guards continue to land on the civilian (northern) runway of Damascus international airport. It should also be noted that from the beginning of 2022 until this time, about 8 Jumbo jet 747 cargo planes belonging to the Revolutionary Guards and the Iranian Air Force have landed at the airport.

The airlift through the air corridor from Iran to Syria continues. As we have already published, it is possible that on some of these flights, families of Shiite militiamen from Iran were transported to Syria to relocate them (Shi’ization through population demographics) to areas south of Damascus and the Bukamal region.

In 2021, about 1,000 attacks were carried out in the Middle East. As part of Israel’s “campaign between wars,” (CBW) dozens of Iranian-related targets were attacked with hundreds of armaments, mainly throughout Syria. Most of the targets were weapons defined as “advanced” / “special,” i.e., components destined for the missile precision project, air defense systems, cruise missiles, long-range missiles, various types of UAVs, and electronic combat systems.

It is estimated that about 70 percent of the time, the air, sea, and land arms smuggling routes, are closed due to Israeli activity. However, although arms smuggling has decreased compared to 2020, we do not know what manages to evade Israeli intelligence reaching Syria and Lebanon.

In the act of disruption, emphasis must be placed on the parameters that can be influenced: pace /quantity and quality. Similar to preventing Palestinian terrorism in Judea and Samaria, where Israel operates with a strategy nicknamed “mowing the grass,” Israel operates the same throughout Syria. Once a relevant intelligence indication is received, intelligence and operational resources are directed towards it. When a window of opportunity opens, the target is eliminated. That way, the grass doesn’t grow…

Iran’s plan to turn Syria and Lebanon into a direct geographical front against Israel has not changed, and the Iranians seem determined to preserve, develop and empower it. Lebanon is a fait accompli in this regard, there Hezbollah is deployed massively, exercising the “human shield” tactic. Lebanon is one large launch area with tens of thousands of mortars, tens of thousands of short-range rockets, thousands of medium- and long-range ballistic missiles, cruise missiles, air defense systems, and hundreds of precision medium-range ballistic missiles.

In Lebanon (Hezbollah), Israel disrupts the quality element. The quantity component can no longer be affected – it is a fact, as noted above. Disruption of the quality element in Lebanon begins with action against it on Syrian soil since that is where Iran tries to smuggle the quality and special means into Lebanon.

In Syria, Iran’s military build-up in quantity and quality is not yet a fait accompli. To disrupt the quality component in both Lebanon and Syria and the quantity component in Syria, Israel must act intensively. In light of this, we have been witnessing an increasing volume of airstrikes on Syrian soil that has been taking place for a long time now.