Who was the Russian “air message” Intended for? 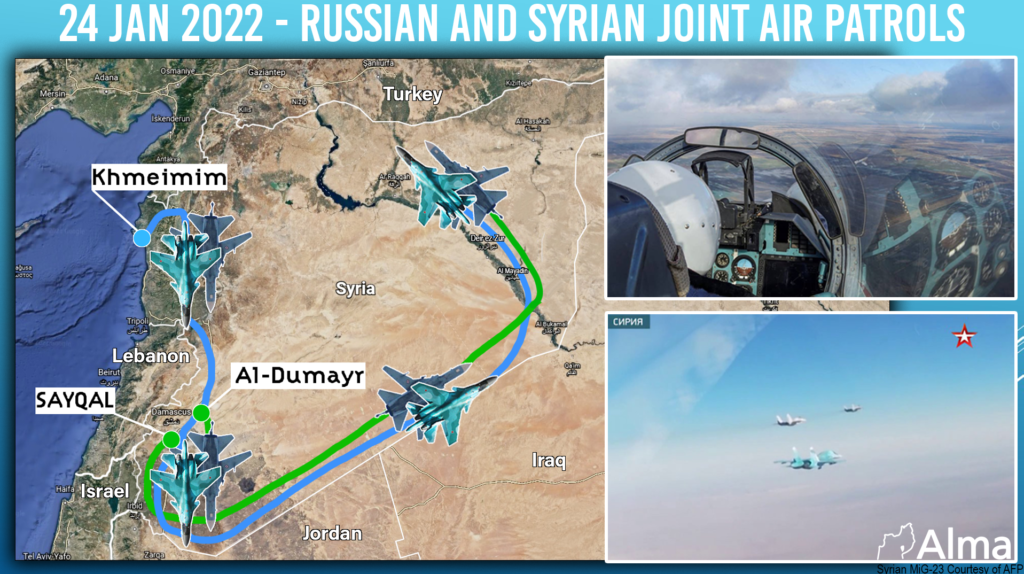 On January 24, the Russian army announced that Russian and Syrian army pilots conducted a joint air patrol mission in the skies over Syria. According to the Russians, the flight path ran along the Golan Heights / the southern Syrian border, the Euphrates River, and northern Syria. The Russian planes (Sukhoi 34 / 35) took off from the Hmeimim airbase in northwestern Syria. The Syrian (MiG-23/29) planes took off from the Seikal and Dumayr airfields near Damascus.

Most publications relating to the subject explained that this act is a Russian message meant to restrict Israel in the contexts of the Campaign between Wars.

We wish to offer a different interpretation:

We would like to refer your attention to the flight path: southern Syria, the Euphrates River, and northern Syria. These are distinct areas where the radical Shiite axis led by Iran operates to establish and entrench itself civically and militarily. Southern Syria: on the border with Israel. The Euphrates River: Al-Bukamal, Al- Mayadin, and Deir Ezzor areas, are key geographical sections of the land corridor. Northern Syria: the Aleppo area, is where there is a growing Shi’ization trend.

Include to this the Russian entrance into the port of Latakia (January 19), where, until then, the Iranians acted as if it belonged to them, and the Russians’ growing involvement in the activities of the Syrian 1st Corps in southern Syria. Please be reminded that Hezbollah’s southern headquarters unit operates within the Syrian 1st Corps.

In light of this, perhaps the Russian activity, as described above, is actually aimed at weakening the Iranians in the race for influence in Syria?

This is not the first time that the Russians have carried out joint air operations in a similar format with the Syrians. But, the timing of the extensive publicity of the current activity is not accidental.

If the Russians do not step up their military influence at the expense of the Iranians, As they pledged to Israel back in 2018, Israeli activity (Campaign between Wars ) in Syria will only increase.