The Ukrainization of the Palestinian Narrative 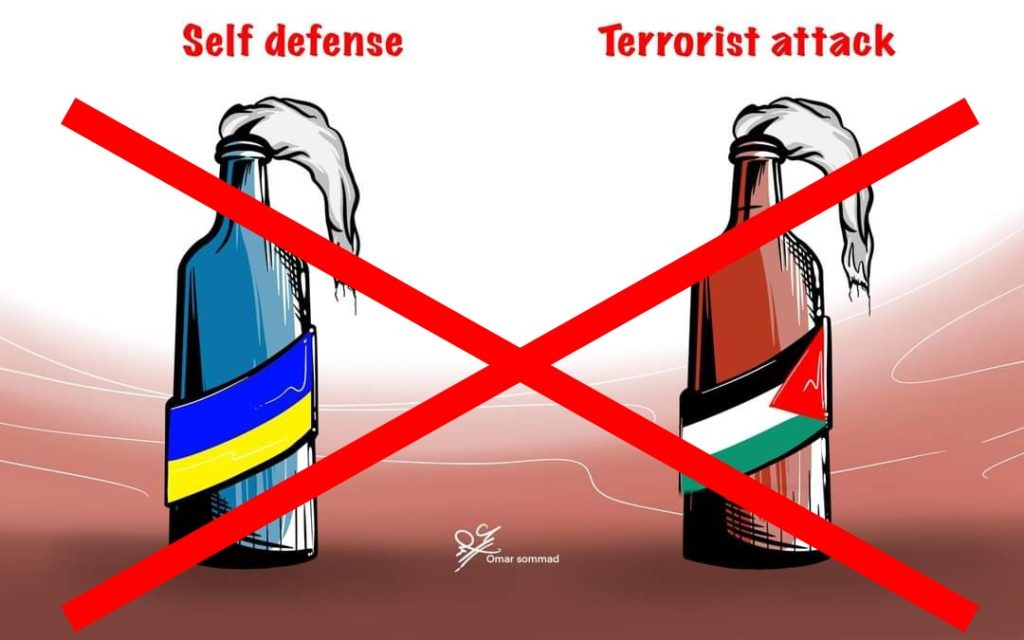 Together with the outbreak of the war in Ukraine, a social media campaign aimed at the “Ukrainization” of the Palestinian narrative is developing and intensifying daily. Not only does one element stand behind the campaign, but several elements are working simultaneously — it’s unclear if they’re coordinated. All of these elements are currently operating in high-intensity networks. The Palestinian Authority also joined the effort of promoting this campaign.

The bulk of the campaign operates under the hashtag #UkraineRussiaWar and on Twitter, you can find three Sample profiles that are part of the campaign:

The Palestinians are watching what is happening in Ukraine – especially the public perception aspect – seeing how Ukrainian President Zelensky has become an icon, receiving unprecedented global support and mobilizing global public opinion, almost entirely, against the Russians. It can be assumed that the root of Ukraine’s cognitive success is also the Western countries’ guilt, deriving from the fact they are not fighting alongside the Ukrainians against the Russian invader; essentially, most countries and citizens of the world side by Ukraine. This is no small thing. Success in creating such influential awareness of global public opinion is a force that can win wars and even seriously do damage to a superpower like Russia.

To establish such a narrative and to succeed in sweeping the masses and influencing global public opinion, it is advisable to prepare in advance. This is what the Palestinians are doing these days, exploiting the events in Ukraine to their advantage. The following are some examples of transforming the Ukrainian narrative into a Palestinian narrative carried out as part of a social media campaign:

In our assessment, in the next confrontation with the Gaza Strip, the Ukrainian narrative that received enormous magnitude (rightly so) and reached the peak of global sanctions (rightly so) will be directed against Israel, at least in part, in a Palestinian configuration. The precedents currently being created in the Russian – Ukraine war will be used (and already are being used) by the Palestinians against Israel in the next significant confrontation with them. In the Palestinian information warfare campaign, truth and facts are irrelevant.

Several solid facts are in Israel’s favor: Israel withdrew from the Gaza Strip repositioning its forces on a border that has broad international consensus, Hamas’ inaccurate statistical rocket fire at a civilian Israeli population is a war crime under international law, and in Judea and Samaria terrorist activity is constantly conducted (knife stabbings, Molotov cocktails, gunfire, etc.) against a civilian population. This terrorist activity often reaches the streets of Israel’s main cities. Israel does not attack unless it is attacked.

Israel should not use the common excuse almost always used,  that because Israel is strong and the Palestinians are weak, Israel will always lose the information campaign. Israel cannot afford to settle for the worn-out verbal claim that “Palestinian documentation is twisted and distorting reality.”

The Palestinians use and will continue to use every kind of information at their disposal to strengthen their narrative, including distorting documentation and twisting reality. The truth for them has long been irrelevant. Israel needs to change its perception in its information warfare and understand that what is relevant is the story presented outwardly and how it manages to influence international emotional intelligence. The winning formula is to present the truth and facts so that they will influence international public opinion and emotion.

***The content of this article was taken from the Telegram channel in Hebrew called Abu Ali. The channel specializes in the Palestinian arena *** the article’s content was processed and translated by the Alma Center.