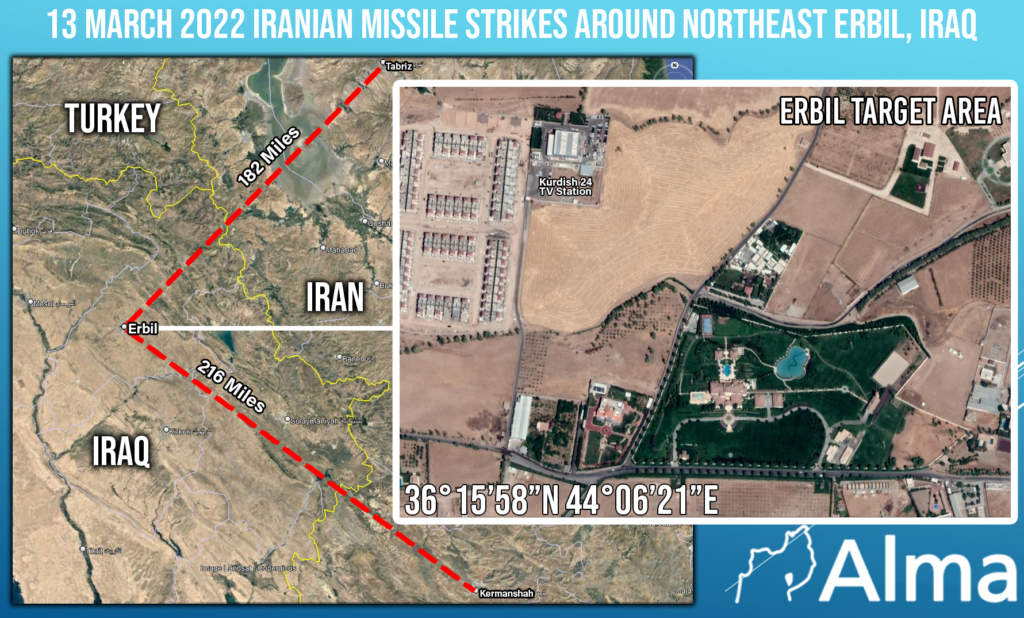 On March 13 (01:20 Am, local time) about 12 ballistic missiles were fired directly from Iran towards the city of Erbil (the capital of the Kurdish region in northern Iraq) To an area located northeast of the city.

These missiles are powered by a solid-fuel engine, carrying a conventional half-ton warhead and usually have an inertial navigation system based on “blind navigation,” i.e., continuous calculation of position, direction, and speed based on a predetermined landmark (for impact) and a progress calculation based on a known or approximate speed, path and time passed.

In our assessment, the missiles fired in this case were upgraded and accurate missiles. These are the type of missiles that the bulk of the Iranian precision project for Hezbollah focuses on.

According to some Arab and Iranian media outlets, the sites targeted were ” Israeli Mossad bases” (a familiar Iranian claim). As of noon (March 13, local time), Iranian Revolutionary Guards claimed responsibility for the shooting and claimed it was carried out using precision missiles on a strategic center of the “Zionist entity” in Erbil.

In our assessment, there may be several reasons for the firing:

At this stage, Iran prefers not to carry out military activities with the potential for regional escalation. Such an escalation could severely hamper negotiations on the nuclear deal. On the other hand, in order to maintain its relative position, Iran has chosen to carry out a noisy and purposeful display that can be interpreted in several ways. This way Iran can enjoy conveying a general message that is relevant to both the United States and Israel.