Finally, the Lion Smiles Again: The Rapprochement of Arab Countries to the Syrian Regime 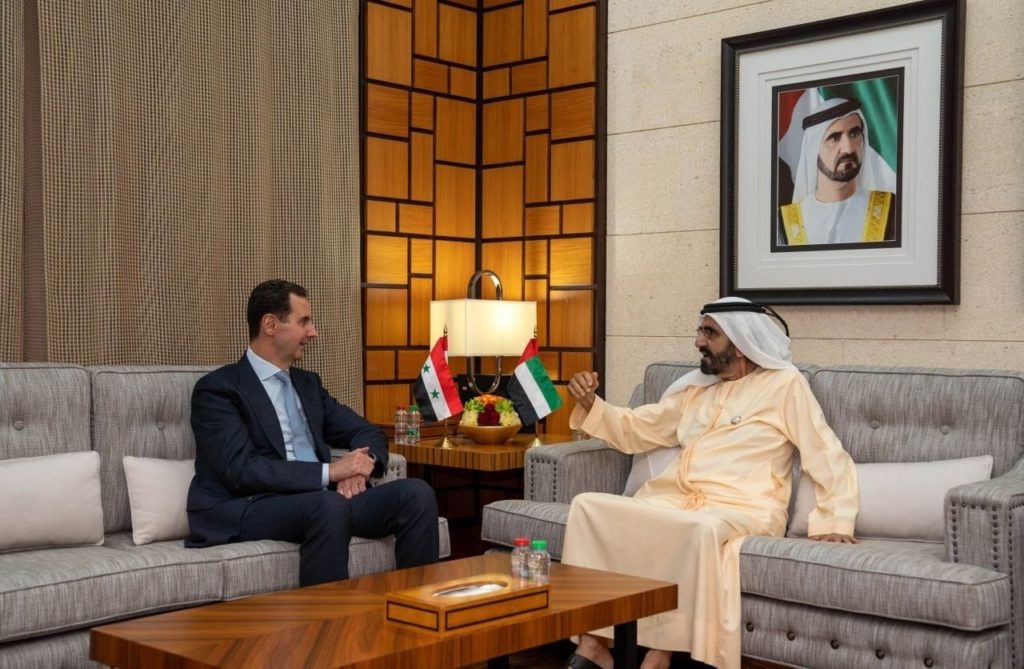 Over the past few months, we have witnessed a growing rapprochement between Arab countries and Bashar al-Assad and the Syrian regime (the word Al-Assad in Arabic means lion). This rapprochement comes after many years of civil war, in which most Arab countries severed their ties with Syria and condemned the Assad regime, with some even taking an active part in supporting and assisting (money, training, weapons, and logistics) Syrian opposition elements in the fight against the regime. If so, what has changed? What led those countries to re-embrace the lion from Damascus?

A few months ago, we wrote about Jordan’s approaching Syria for economic, social, and security reasons (see our article published in November 2021) and the normalization of relations. At the end of 2018, Abu Dhabi reopened its embassy in Damascus. Recently Bahrain announced its appeal to renew diplomatic relations and strengthen economic cooperation with Syria.

In mid-March 2022, Bashar al-Assad visited the United Arab Emirates. This followed a visit by the Emirate Foreign Minister to Damascus in November 2021 and after visiting Moscow in early March 2022. This visit surprised the media in general and Americans in particular.

There are several possible explanations for the Arab countries’ rapprochement with Syria: the tremendous disappointment with U.S. policy, an admission of Assad’s victory in Syria, the desire to deal with the Iranian threat, the desire to get closer to Russia, and economic state interests.

The main disappointment is towards U.S. policy. The nuclear agreement that the U.S. and Europe are promoting with Iran reinforces the perception that the United Arab Emirates, Saudi Arabia, and Arab countries are promoting rapprochement with Syria to reduce the security dangers from Iran and as an act of protest against the nuclear agreement and the United States’ policies that seemingly have abandoned the Gulf states security.

Despite reaching the Abraham Accords during the previous U.S. administration, the moves of rapprochement with Syria are a statement aimed at the U.S. policymakers. The U.S. did not like the Emirate’s rapprochement with Syria and even condemned Assad’s visit. The Emirates sent a clear message: it is possible to do without the U.S. in the Middle East; there are other options.

In addition, the war between Russia and Ukraine seems to have refined the Arab countries’ conclusion that they cannot rely on the U.S. but only on themselves when dealing with regional threats (similar to Israel…). To this end, they must strengthen their regional position and strive to maintain a reasonable and good relationship with all countries, including Russia, which has a major influence in Syria and Iran.

It is worth mentioning that since 2019, Russia has urged the Arab states to reinstate Syria into the Arab League, claiming that such a move would promote peace and restore stability to the region. In our assessment, Arab countries today would prefer to join the United States, but this is a clear message to the United States.

The interest of the UAE is an economic and status interest; they desire to be a bridge between the Arab world and the U.S. and even Israel, thus positioning its international status as a policymaker, decision-maker, and pioneer for other Arab countries to restore ties with Syria. There is enormous economic potential to be part of the system for the reconstruction of Syria and the enrichment of the Emirati coffers. The Syrian interest is also prominent in this context – the money from the Gulf countries can help rehabilitate the state.

Saudi Arabia may also work to promote thawing and resolving relations with Syria as soon as possible. Another consideration may also include an indirect deal to end the fighting in Yemen and reach a settlement in the region through Russian coordination with the Iranians. Let’s also not forget the issue of oil and the war in Ukraine that affects oil production agreements and creates a global dependence on oil and gas from Saudi Arabia and the Gulf states.

The moves made by Arab countries are actually an admission that Assad won the Syrian civil war. Now that the situation is starting to stabilize, we can try to restore life to the previous normal life before the Civil War.

On the other hand, Qatar continues to assist opposition groups in northern Syria. The perception that the approach of Arab countries will lead to Iran being pushed out of Syria and the strengthening of Russia at Iran’s expense is possible since both Russia and the Arab states will benefit from it. This message was recently delivered to Israel by the Emirates. Nevertheless, pushing Iran out of Syria is a slow and long-term process, and it is not certain that these approaches will help.

In our assessment, Syria wants to balance the Western perception towards it and again be a legitimate regime in the eyes of the world’s countries. Syria wants to return to its glory days when it played on all fields enjoying all worlds. On the one hand, it is part of the axis of resistance with Iran and Hezbollah and maintains close relationships with Russia. On the other hand, it knows how to have a good relationship with Arab countries, the U.S., and Europe. In doing so, Syria will be able to gradually return to the fold of nations and rehabilitate itself. This may even save Assad and his regime from being accountable for war crimes, so the lion in Damascus is smiling again…