The Houthis’ “Operation Break Siege 2” is a clear Iranian message to the U.S. at the expense of Saudi Arabia 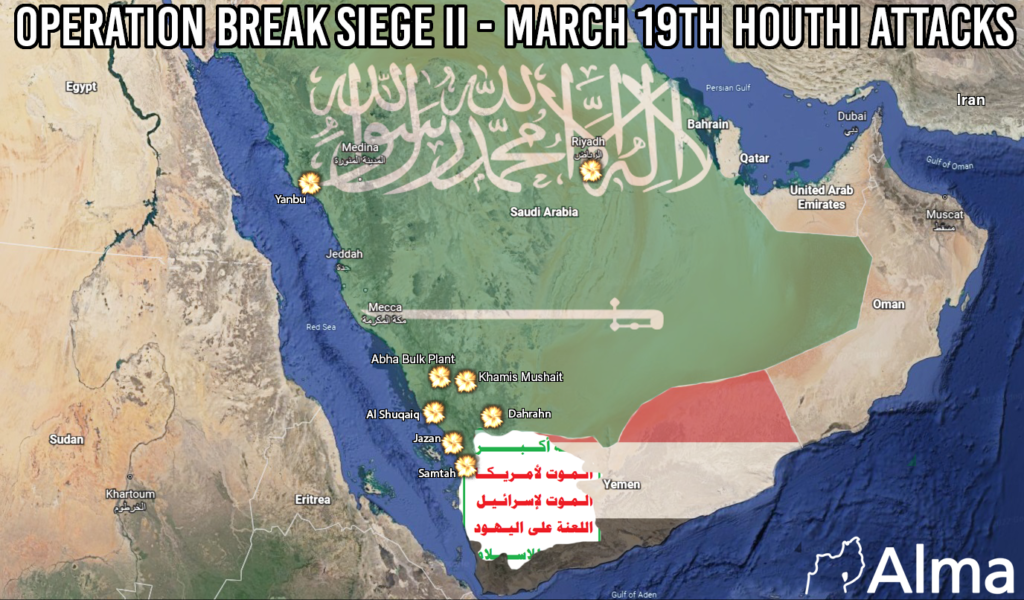 On the night between March 19 & March 20, the Houthis in Yemen launched one of their most extensive attacks to date against Saudi Arabia. In this attack, the Houthis demonstrated extensive coordination and attack capability on a variety of targets, an attack that greatly hampered Saudi air defense capabilities.

In our assessment, the timing of the attack is not coincidental and is an Iranian message to the U.S. The negotiations on the signing of the nuclear agreement with Iran, and U.S. efforts to create an alternative market for the Russian energy market following the war in Ukraine, are interrelated.

Iran is using the Houthis as leverage to exert influence over the United States at the expense of Saudi Arabia. Iran is sent a clear message: not only can Saudi Arabia and the Gulf states be an alternative energy market, but the Iranian energy market is also relevant and an alternative. A quick signing of the nuclear agreement will enable Iran to export oil and serve as a major market for oil supply. If this is not possible, then Iran will act to harm the additional alternative markets in Saudi Arabia and the Gulf states.

Firing tactics that challenge the air defense systems are familiar to Israel from the clashes with Hamas in the Gaza Strip: simultaneous launching of a very large number of rockets from several launching points aimed at civilian population centers in Israel greatly challenged the Iron Dome system in the last escalation against the Gaza Strip in May 2021.

According to reports originating from both the Houthis and the Saudis, the targets were civilian and economic and were deployed within a very wide radius: from near the border with Yemen in southern Saudi Arabia to distant targets up the Saudi Red Sea coast and deep in the country.

Houthi spokesman Yahya Saree issued an official statement after the extensive attack, which he called “Operation Break Siege 2.” He claimed that the operation was organized and planned as a two-stage operation, apparently intending to increase the impression and shock, making it more difficult for the Saudi air defense forces.

According to the list of targets provided by the Houthi spokesman, the first stage appears to have been aimed at the more distant targets and the second stage at those relatively closer to the border. According to reports from both sides, three types of weapons were used – UAVs, ballistic missiles, and cruise missiles. It is possible that the missiles were only cruise missiles and that the report of ballistic missiles originated by mistake or confusion.

The attack, which was aimed at many targets simultaneously, caused panic and confusion among the civilian air traffic in Saudi Arabia. Many planes had to delay landing until it became clear that the attack was over.

The list of targets that were attacked or the targets meant to be hit is relatively long and is brought from sources on both sides. Some of them, according to Saudi sources, were not struck because the air defense was able to intercept the missiles aimed at them –

According to the Saudis, all the attacks caused damage only to equipment and property, including the torching of containers damage to vehicles and residential buildings in Jazan, but no casualties were caused. The Saudi Air Defense reported that it managed to intercept nine UAVs. Four drones were intercepted in the southern part of the kingdom, near the border with Yemen, three drones on their way to attack Yanbu and one ballistic missile aimed at Jazan.

Aramco’s CEO, Amin al-Nasser, announced that despite the attack, the company’s energy supply capacity was not impaired and was continuing as usual. Saudi Arabia and the other coalition countries said they saw the attack as an escalation and a rejection of peace efforts, although it was reported that on the eve of the attack, a ceasefire was negotiated for the month of Ramadan, which will begin from the beginning of April. The Houthi spokesman’s statement that there are many other targets in the Houthi “target bank” leaves little room for optimism about the prospects of peace during the month of fasting.