Does Muslim involvement in the war in Ukraine have religious legitimacy? 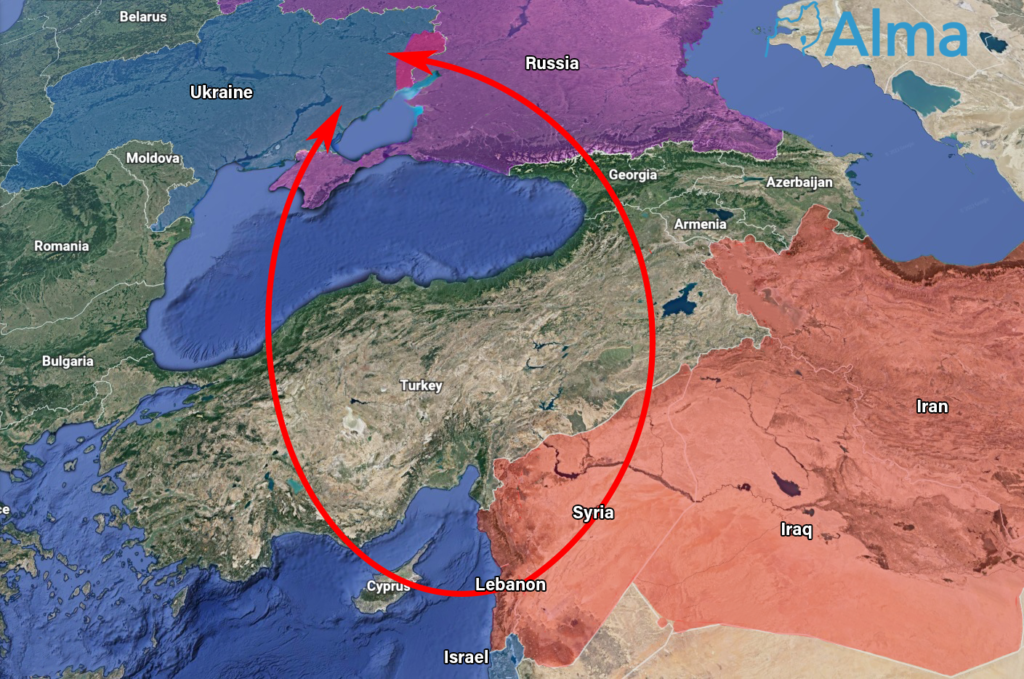 On February 24, 2022, the Russian Ukraine war broke out. Iran, Syria, and Hezbollah expressed support for Russia’s policies. On the other hand, the official position of Lebanon on February 25, 2022, was against the attack, and it even issued an official condemnation of Russia for the attack on Ukraine.[1] On February 27, 2022, Hezbollah’s representative in parliament, Hassan Faddalah, a member of the Kutlat Al-Wafa’ Lil-Muqawama (Party of Loyalty to the Resistance Bloc), said that the official Lebanese position should be thoroughly examined because Lebanon has diplomatic relations with both Russia and Ukraine and must maintain a neutral policy.[2] On March 01, Hezbollah Secretary-General Hassan Nasrallah spoke out, supporting the Russian attack on Ukraine, an attack intended to protect Russia’s national security from the United States and NATO. Nasrallah justified Russia’s desire to protect the rights of Russian citizens in Ukraine’s two eastern provinces.[3]

In a fatwa published after a conference of the Muslim Religious Leaders in Russia on March 16, 2022, it was made clear that they fully supported the Russian leadership.

They made it clear that they were in a situation of protecting their home from a Muslim point of view. Therefore, they must help their country (Russia) defend itself against the genuine threat of the use of nuclear and biological weapons by NATO and the West. Hence, and since this is a defensive Jihad, the Fatwa permitted religious authorization for the Russian fighting in Ukraine and that Muslims killed in the fighting in Ukraine would be considered martyrs. Of course, the Muslims are committed to fighting alongside the Russian forces in light of them being part of the Russian nation. There are about 20 million Muslims in Russia, most of them Sunnis, and about 2 million Shiites in the Azerbaijan region.[5]

On March 6, 2022, the Wall Street Journal reported claims that Russia is recruiting Syrian mercenaries who specialize in urban warfare to fight alongside it in Ukraine. These Syrian combatants operated alongside the Russian Wagner force in Syria. U.S. officials said that some Hezbollah combatants were already in Russia but declined to provide details on the scope of the recruitment and any further information regarding them. According to a report in Syria, Russia has offered Syrian volunteers a reward of between $200 and $300 to those who will serve as guards and as a security force in Ukraine for six months.[6]

On March 11, 2022, Russian President Putin called on foreign combatants to assist the Russian army in the fighting, and the Russian Defense Minister claimed that there were about 16,000 volunteers from the Middle East willing to go and fight alongside the Russian military in Ukraine.[7]

On March 13, 2022, the Mufti of Ukraine called on the Syrian mercenaries not to assist Russia, noting that the Muslims in Ukraine were protecting their homeland. The Mufti’s remarks apparently came in the wake of information published in a report on March 23, 2022, in which it was claimed that the Russian Command in Syria, headed by Alexander Orlev, had reached agreements to send mercenaries of the 8th Brigade from Deraa (belonging to the Syrian Fifth Brigade -a proxy of the Russians in Syria) and claims that negotiations are underway on the recruitment of soldiers from the 16th Brigade. The report claims that Russia has recruited 1,000 Syrian military operatives and Hezbollah operatives, with it unclear whether they were referring to Syrian or Lebanese operatives.[8]

On March 15, 2022, a report claimed that Russia opened recruitment centers in Syria seeking volunteers from the Middle East, offering to pay them between $300 and $600 a month. From the mercenaries’ point of view, it is not out of ideology but rather a desire to improve their personal and economic situation.[9] A report in Sky News on March 18, 2022, quoting Ukrainian sources, revealed that Russia had sent 1,000 Syrian and Hezbollah operatives with urban warfare experience to Ukraine.[10]

On March 18, 2022, Nasrallah denied reports on Arab media that there was an agreement with the Russian Joint Chiefs of Staff to send Hezbollah fighters and experts to Russia Ukraine to help fight in urban areas in Ukraine. Nasrallah has made it clear that he categorically denies this and that these are unfounded lies.[11]

Should Hezbollah get involved in the fighting in Ukraine, and should Hezbollah have fatalities due to this involvement, the bodies can always be transported to Syria through Russia, claiming that they fought in Syria, or alternatively, they can be buried secretly on Ukrainian/Russian soil.

Contrary to the past and despite his denials, Nasrallah did not publicly explain why Hezbollah operatives should not go to fight in Ukraine and did not emphasize in this case (as he did in other cases) that there is no reason for the resistance fighters to fight conflicts that do not affect Hezbollah as an organization and Lebanon as a state.

In this case, of course, Nasrallah will not be able to make his usual claims. Fighting in Ukraine does not affect the axis of resistance, the liberation of Jerusalem, Palestine, the protection of the holy places, the fight against the infidels (the apostates ISIS and the Al-Nusra Front), the protection of the Lebanese Shiite community, or any of the other pretexts in which he excused Hezbollah’s involvement in the fighting in Syria (it should be noted that Ukraine also has a Shiite community with an estimated one million people, most of them Caucasians who fled Mongolian rule, but also Iraqis and Iranians[12]).

Reports of Hezbollah’s involvement in the war in Ukraine continued even after Nasrallah’s denial. On March 24, 2022, al-Hadath TV reported that on March 12, 2022, a meeting was held at the Russian Hmeimim base in Latakia, Syria, between a senior Hezbollah figure named Haj Naji Hassan al-Shartouni, known as Al-Haj Abu Ali, and a senior commander of the Wagner Force, Alexander Kuznetsov. In the meeting, the participants agreed to recruit 800 Hezbollah operatives to fight in Ukraine alongside Russian forces and assist in urban warfare.

In return, an arms deal between Hezbollah and the Russian arms company Almaz, which specializes in manufacturing anti-aircraft weapons and missiles, will be implemented. The deal will be carried out through a third party, possibly the Wagner Force. Two days after the meeting in Hmeimim, Hezbollah established a recruitment office in the village of Al-Qusayr. The person responsible for the recruitment was a commander in Hezbollah’s security unit, As’ad Hamiya, known as Al-Haj Hadi. In addition, three more recruitment offices were opened in Syria: in Aleppo, Yabrud, and Sayyidah Zaynab, as well as in the Dahieh in Beirut.

The intention is to send 200 combatants on March 29, 2022, for $1,500 per fighter. Al-Hadath TV presented signed recruitment documents, including their agreement to go join the fight. The channel claimed that despite Nasrallah’s denials, there are reports of Hezbollah operatives being sent to Ukraine.[13] This report by Al-Hadath was quoted on Ukrainian websites Novaya Gazeta and Pravda, and similar reports appeared on the Alhurra website.[14]

Whether they fight on Ukrainian soil or not, the question remains; what do Muslims, Sunnis, and Shiites, have to do with a campaign on Ukrainian soil? Is this about Jihad? What is the legal authority, and what does Islamic law say? What is the connection between Lebanese nationalism, the protection of the Lebanese homeland, and the axis of resistance “Al- Muqawama” and fighting in a Western foreign country that does not threaten Lebanon?

On March 3, 2022, Dr. Mohammed Al-Saghir, a Member of the Board of Trustees of the World Federation of Muslim Scholars, said that the Russian Muslim soldier should not join the fight against Ukraine. On the other hand, a Ukrainian Islamic soldier is allowed to fight as he is in a Jihad of legitimate self-defense. He also made it clear that Muslims who wish to join the oppressive side, i.e., Russia, are in cooperation with sin and aggression, contrary to Islam.[15]

Al-Jazeera broadcasts from March 07, 2022, made it clear that Jihad in Ukraine is possible as part of a defensive Jihad if a Muslim’s life, dignity, money, or land are exposed to direct attack. That is to say, a Ukrainian Muslim who was attacked, fought, and was killed by the Russian army is considered a martyr. But Ukrainian Muslims are not allowed to join the Ukrainian army and be under the command of a heretic. For other Muslims who want to fight in Ukraine under a non-Muslim flag or those with a desire to fight Russia on Ukrainian soil, this is an act that is against the perception of Jihad, which has a clear purpose, and therefore it is forbidden.[16]

In a Sunni Muslim Fatwa from March 27, 2022, Dr. Mohamed Yousry Ibrahim, Secretary-General of the Al-Haya Al-Sharia Lalkhuk Waelsalah (the Research Center for Islamic Legislation and Ethics) and Deputy Dean of the University of Al-Medina International, made it clear that Muslims should not willingly join and intervene in the fighting between two infidel countries, and that the heretic should not be allowed to be a ruler of a Muslim. He also clarified that even a Muslim who holds the citizenship of a heretical state should not voluntarily join the army of such a state. Dr. Yousry stressed that if a Muslim lived in one of the infidel countries and the assailants came to him and threatened his life, he would be allowed to defend himself, his dignity, and his money. In this case, he may fight with non-Muslims against non-Muslims.[17]

In the testimony of an Iraqi volunteer, he appears to want to fight alongside Ukraine against Russia in light of poverty and economic reasons and the high unemployment rate in Iraq. The Iraqi volunteer added that some of the volunteers wish to join the fight just to reach the combat grounds in Europe in search of a better life.[18]

It should be noted that, unlike Sunnis, there is no Shiite religious reference to the position of the Muslims in this war. Hence, the conditions of Jihad according to Islamic law are; danger to Arab land, a struggle against a foreign occupier, the protection of Dar al-Islam (territories that are part of the Islamic nation) in terms of territory and also in terms of controlling the Muslim people, danger to the Muslim religion, fighting against infidels, and even the occupation of non-Muslim lands to convert them into Muslim lands (Dar al-Harb).

So, what is the pretext and religious legitimacy, if there is any, for the participation of Hezbollah, Shiite militias, and Syrian mercenaries alongside the Russians?

If there will be any participation of radical Shiite axis elements in the fighting in Ukraine, it will be based first and foremost on interests, not ideology. There is no legitimate religious authorization (neither Sunni nor Shiite) for such participation. The participation will most likely be motivated by receiving some benefits from the Russians in the form of obtaining high-quality weapons in return for their involvement, etc.