Hezbollah’s Candidates for the May 2022 Parliamentary Elections 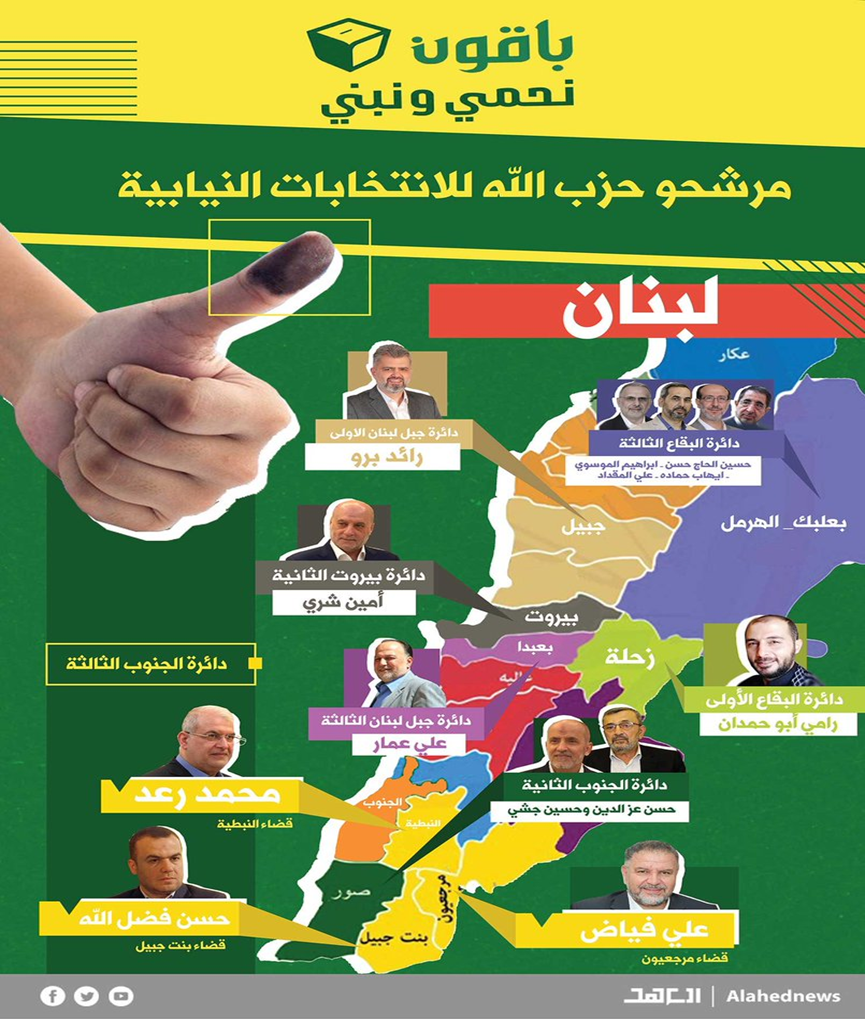 Hezbollah’s campaign for the May 15th, 2022, parliamentary elections is underway. The campaign is categorized as extremely intense. There is a concern throughout Hezbollah that there will be a poor turnout on election day. Nasrallah addressed the issue in his speech on April 11th, speaking out against intentions of postponing the elections: “Perhaps one of the objectives of those who talk about postponing the elections is to damper the people’s enthusiasm to participate in them… The election will be held on May 15th… It’s a genuine campaign, and the people need to participate with enthusiasm…”

Among Hezbollah’s 13 candidates for Parliament are a businessman, a doctor, a social activist, a former military operative who performed his “jihadi duty,” among other places, in Syria and Yemen, a chemistry professor, a media professional, a civil engineer and a doctor of sociology. Only two of the candidates are new candidates. All other candidates are sitting MPs.

The following is a breakdown of the 13 Hezbollah candidates running for Parliament by constituencies:

Amin Sherri – born 1957. A former member of the business sector, he was chairman of the Shoe Importers Association and a member of the Beirut City Council before being elected to Parliament in 2005. Immediately after being elected in 2018, he demanded that his photos be removed from posters, claiming that only martyrs and combatants deserved to appear on billboards…

Raed Berro – a new parliamentary candidate. Born in 1974. He holds a degree in sociology from the University of Beirut and is a social activist. He served as mayor of Ain el-Ghoubayeh for 16 years until 2020.

Ali Ammar – born in 1956. Originally from Burj al Barajneh. He is a graduate of Shiite Islamic studies in several different institutions and has been a member of Parliament since 1992. Since being elected to Parliament, he has been a member of the Parliament’s security and foreign affairs committees. He is known for organizing conferences and seminars dealing with opposition to Israel.

Rami Abu Hamdan is a relatively young candidate (we did not find his birth year). He is mentioned as a military operative. According to the information we found on him, he was involved in Hezbollah’s fighting in recent years in Syria, Iraq, and Yemen. He has no significant experience in the political arena. He is known as a candidate whose goal is to split the votes of the Abu Hamdan clan in his area of residence since one of his relatives is a candidate on behalf of an independent list and not on behalf of Hezbollah.

He is known for his utter admiration for Nasrallah. A few days after he was declared a candidate by Nasrallah, Abu Hamdan embarrassed Hezbollah in a political home gathering declaring that Imam Ali’s sword was in Nasrallah’s hands. Hezbollah sought to shelve the film of the home gathering but was unsuccessful. This is his first time competing in a parliamentary election.

The video that embarrassed Hezbollah:

Dr. Ali al-Muqdad – Born in 1961. He has been a Member of Parliament since 2005, originally from the city of Baalbek. A specialist in internal medicine and neurology. Throughout his education, he dealt extensively with the Coronavirus pandemic in Lebanon and warned of complacency during the outbreaks of the Delta and the Omicron variants. He is heavily involved in the state’s financing of private hospitals.

Prof. Hussein al-Hajj Hassan – Born in 1960. He is a Professor of chemistry, and his Ph.D. is from the French University. He is the author of several scientific chemistry and physics books. He was Minister of Agriculture and Minister of Industry in the Lebanese government for 15 years. He fought against Israel in Beirut in 1982 and was an associate of Hezbollah from its foundation. He has been in charge of the education in Hezbollah since 1991 and was elected to Parliament as early as 1996.

Ibrahim al-Moussawi – Born in 1965. Besides speaking the Arabic language, he is fluent in English, French, Italian, and Farsi.   A Hezbollah liaison and spokesperson. He was often interviewed in Western media networks, especially during the Second Lebanon War in 2006. He holds several academic degrees, including in English literature. He is a Member of Hezbollah’s State-Political Council and has been a member of Parliament since 2018. He was involved in filing libel suits against Lebanese media organizations that blamed Hezbollah for the port disaster (Aug. 2020).

Ihab Hamadeh – Born in 1973. He has been an MP since 2018. He holds degrees in Arabic language and literature and human resources management. He’s a Karate armature. He advanced in the party system for about 20 years. His family had a bloody conflict with a neighboring clan that murdered and kidnapped people on both sides, including Hamada’s brother. He was accused of using his power in Parliament to pressure security forces to intervene in the interests of his family.

Hassan Ezzeddine – Born in 1953. He has been an MP since 2018 and represents the city of Tyre within the district. He is a member of Hezbollah’s State-Political Council and heads the division in charge of the relations with the Arab countries together with Muhammad Kuthrani. He holds a master’s degree in political science, and he studied religious studies at the Qom Seminary in Iran. He campaigned for the victims of the fires in the south of the country, accusing UNIFIL of not doing enough to evacuate the unexploded Israeli ammunition that caused many of the fires. He is a member of the Parliament’s human rights committee.

Hussein Jishi – Born in 1955. A member of Hezbollah from its foundation. He is a civil engineer by training and a member of Parliament since 2018. He strongly accuses the country’s high-ranking officials of being captives of the United States and the West, leaning on them for their own wealth and blocking Lebanon from turning to new markets in the East.

Ali Fayyad – Born in 1962. Originally from the town of Taybeh in southern Lebanon. He is a Dr. of Political Sociology and is deeply involved in studying social issues in Lebanon and throughout the Arab world. He rose in Hezbollah’s civil system from the start. He has been a member of the State-Political Council since 1987 and an MP since 2009. He is a member of the Finance Committee and has been deeply involved in distributing Iranian fuel in southern villages over the past year.

Hassan Fadlallah – Born in 1957. Originally from the village of Yanta in southern Lebanon. A graduate of the Communication Faculty at the University of Lebanon. He served as director of Al-Manar from 2001 to 2005 and has a master’s degree in education. He has been an MP since 2005 and has served as chairman of the Communications Committee and a member of the Finance Committee, and recently spoke out against the Foreign Ministry’s condemnation of the Russian invasion of Ukraine. He serves as a vocal spokesperson against the emerging arrangement with the IMF that he claims will lead to the western takeover of Lebanon.