The Political Power of the Shiite Opposition: Can Hezbollah be Weakened through a Political Process? 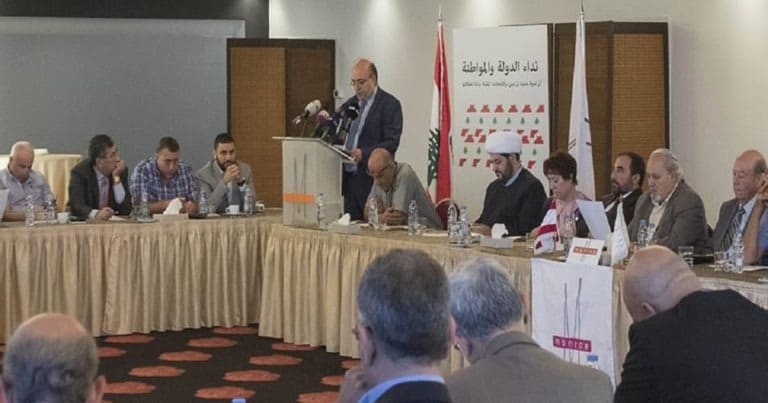 The upcoming Lebanese elections in May 2022 are not expected to cause much turbulence in the Lebanese political system. What was is what will be, the same problems and the same tensions. Tensions will once again arise between the March 8 Alliance and the March 14 Alliance, as Hezbollah will pull the strings and issue ultimatums. After the elections, the Lebanese Christian president will be elected, and once more, the system will be accompanied by power struggles. The Sunni prime minister will not be able to form a government, a coalition, and a cabinet will convene without representatives of the Shiite duo (“al-Thani al-Shi’i” -original quote), Hezbollah and Amal. The latter will continue to run Lebanon without being held responsible for the state’s downfall.

This article will not deal with the political system and the political parties’ suppositions, their beliefs, and denominations, nor will it address the election law and electoral system in Lebanon, yet it will deal with and focus on the Shiite opposition that currently exists in Lebanon, that appears before elections, and between them. A Shiite opposition exists but does not have any true power. It can be said that it lacks any influence or ability. The Shiite opposition emphasizes that not all Shiites automatically support Hezbollah or the Amal movement. Their main contention is that they are first and foremost Lebanese before they are Shiites and that the Lebanese homeland is more important than the loyalty to the Wilayat al-Faqih, from Iran’s involvement and the dependence on Iran. They support the resistance as part of the struggle against Israel but also oppose Hezbollah weapons that should be part of the Lebanese army’s power.

Within the Shiite opposition, there are clerics, politicians, opinion leaders, and journalists who are constantly speaking out against Hezbollah and its policies. Over the past few years, Nasrallah and Hezbollah have clashed with some of them; Nasrallah even called them “Shia al-Safrat,” meaning; the embassy’s Shia, namely, that they are agents of the American and Western embassies and are not loyal to the Lebanese homeland. Of course, Nasrallah ignored the parallel image that sees Hezbollah as the “Shia al-Safara al-Ayraniya,” i.e., the Shia of the Iranian embassy.

Al-Sayed Ali al-Amin, a senior Shiite Jurisprudence figure (“Marja,” the second most senior Shi’ite class of the Twelfth Shi’ite), who served as the Mufti of Tyre and Jabal Amal and was unseated from his position by the Supreme Shiite Council, most likely, due to Iranian pressure because of his opposition to their involvement in Lebanon.

Sheikh Abbas al-Johari, head of the Arab Center for Dialogue and Studies in Lebanon and founder of the News Website “Lebnan al-Jdeed,” is an independent candidate in the current elections.

Sheikh Sabhi al-Tfili, Hezbollah’s first secretary-general, was unseated in 1991 and has since been placed under house arrest in Baalbek.

The Tayyār al-Intimaa’ al-Lubnani (the belonging) is headed by Ahmad al-Asaad, a Shiite politician who opposes Hezbollah.

Ibrahim Shams al-Din, a former minister in Lebanon’s national reconciliation government (after the Doha Agreement in 2008) and an independent candidate who was not a member of Amal or Hezbollah. He is the son of a senior Shiite cleric, Sheikh Mohammad Mehdi Shams al-Din, who led a line of Shiite independence in Lebanon and opposition to Iranian involvement.

Nadeem Kutaish, a Lebanese journalist and a public opinion leader of Shiite origin who opposes Hezbollah and has a sarcastic and cynical sense of humor. He fled Lebanon.

Muhammad Barakat is a Lebanese journalist of Shiite origin.

The “State and Citizenship Appeal” movement (“nda’ aldawla walmuatana”) is an example of a Shiite opposition movement established in October 2017 by several Shiite figures opposed to Hezbollah. At a press conference, they called for the establishment of a Lebanese civil state and the commitment of Hezbollah and the Amal to be part of the Lebanese state. They expressed their opposition to Hezbollah’s involvement in the Syrian civil war and voiced their desire to run in parliamentary elections to win Shiite seats at the expense of the Shiite duo, Hezbollah and Amal.[1]

When we look at the potential of the Shiite opposition in the upcoming elections in May 2022, the candidates’ lists show that there are 112 other Shiite candidates besides the Hezbollah and Amal candidates. Some are completely independent; some have banded together in mixed parties with other community members, and some banded together in independent parties. Together with the 13 Hezbollah candidates and Amal movement candidates, these seek to contend the Shiite community parliamentary seats subject to the Ta’af Agreement (27 seats).

From the time the candidate lists were registered until they were finalized, changes occurred, and most likely, there will be additional changes by election day (May 15). Some of the candidates joined sectarian parties, some joined regional parties, and some simply gave up and disappeared. In some cases, Hezbollah and maybe even Amal pressured them to concede for their own good.

Most opposition members lack support and resources and, therefore, will find it difficult to receive broad support that will change the face of the political map within the Shiite community. Even if they want to win any support, they will be considered, according to Hezbollah and its many supporters, as traitors and those who are undermining the Lebanese state.

Hezbollah and the Amal movement have broad support within the Shiite community. In the upcoming elections, they are joining forces in some districts, including positioning a single Hezbollah or Amal candidate in some of the districts, and in others, they are contending in a joint list. All this is despite an assessment that they will try to steal votes from each other. So, it is expected that they will win the same number of seats as Hezbollah has nowadays, 13 seats for Hezbollah and 13 seats for the Amal movement. The additional seat is that of an independent Shiite candidate, former Maj. Gen. Jamil Amin al-Sayed, who joined the combined list of Amal and Hezbollah in the third al-Beqaa district in the current elections. (Alma’s detailed list of the 13 Hezbollah candidates for parliament)

Most of the Shiite community supports Hezbollah. These are three generations of the organization’s supporters who receive support and assistance and see Hezbollah as a symbol of victory over Israel. In Hezbollah’s broad civilian activities through the bodies operating under its executive council, Hezbollah gains far more support than in its military and political activities.

The religious, welfare, health, and education societies established by Hezbollah over the years have led the Shiite community to be dependent on Hezbollah. The failure of the Lebanese central government establishment to care for the Shiite community enabled Hezbollah’s access to this governmental vacuum. Through these organizations, Hezbollah instills and strengthens ideology among the population. Hezbollah’s clear interest is leaving the population in a state of dependence, distress, and economic difficulty. In this way, Hezbollah can continue to cause the population to be dependent on it and continue to receive their political support and, more importantly, their military support to promote its ideology.

The many Shiite candidates are incapable of changing the face of the political map in the Shiite community, they will find it difficult to steal seats from the Shiites in the constituencies, and Hezbollah and Amal will have the upper hand. From a broad perspective, their activity “makes noise” but does not achieve actual results and change on the ground.

It is possible that if Shiite opposition candidates throughout Lebanon and in Shiite electoral districts would band together to formulate an ideology and an orderly agenda with support and resources, due to the Lebanese electoral system and the commitment to parliamentary seats on a sectarian basis, then they might manage to gain a limited number of seats in parliament at the expense of Hezbollah and the Amal movements.

Hezbollah’s narrative and rhetoric that anyone who is not in its favor is a traitor and anti the Lebanese homeland one of the methods to weaken Shiite opposition figures and opponents of the political system among Shiite members and candidates of other parties. Therefore, it’s very difficult, but not impossible, for Shiite opposition candidates to express their views against Hezbollah.[2]

Nasrallah defined the elections as a significant event. Hezbollah will use all the means to help strengthen the electoral power of its Christian allies, Michel Aoun, Gebran Bassil, and Suleiman Frangieh, whose power is undermined by the strengthening of Samir Geagea.[3]

One of the ways to weaken Hezbollah may be through the Lebanese political system. However, success is not guaranteed to say the least, and doing so can cause Hezbollah to “break the rules” after feeling threatened; that will cause it to take steps that will limit the activity of the political system, lead to complete paralysis of the economy, the health and education systems, or even leading the takeover of large areas of Lebanon and possibly drag Lebanon into a confrontation with Israel on one pretext or another, to strengthen its internal Lebanese status.

In conclusion, there are several actions with which it is possible to weaken or at least interfere with Hezbollah through the political process from a long-term perspective: