Lebanon: Is the Arrival of the Israeli Drilling Rig in the Karish Gas Field a Catalyst Toward an Agreement in Negotiations or Towards an Escalation? 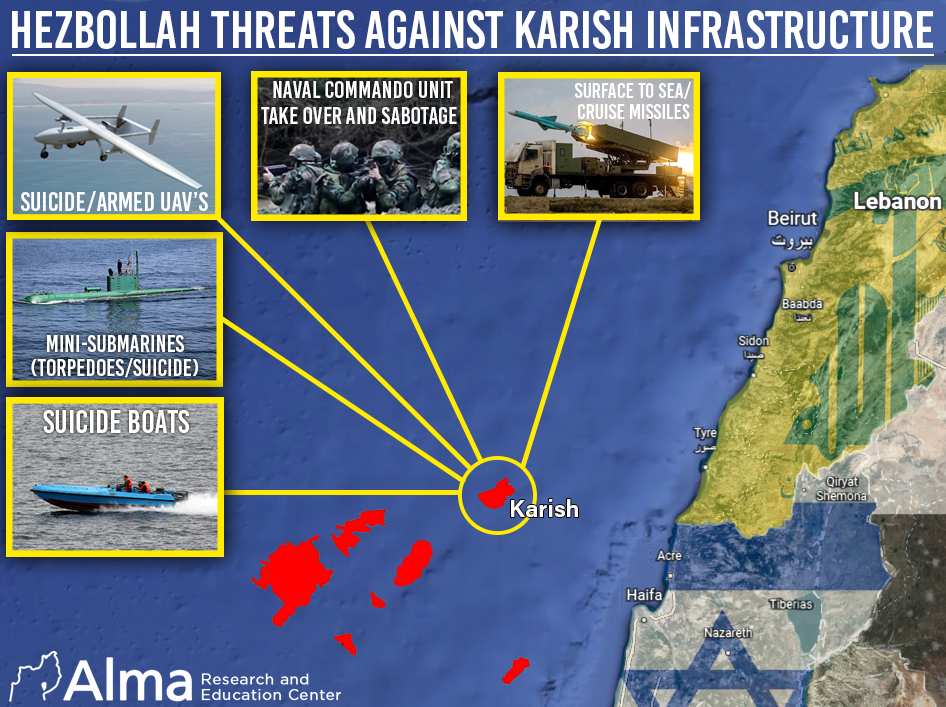 Is the arrival of the Israeli drilling rig to the Karish gas field – a catalyst for the resumption of negotiations on the maritime borders?

Over the past few days, negotiations regarding the maritime border between Israel and Lebanon have returned to the forefront after being at a standstill. This comes against the background of the arrival of the Energean Power drilling rig (FPSO – Floating Production Storage Offloading). The rig, which operates based on an agreement and franchise with Israel, was positioned on June 5, about 90 km off the coast, with the intent of starting to extract gas from the Karish gas field. The gas extraction is expected to commence at the beginning of September 2022. During the election period in Lebanon in recent months, the issue regarding the maritime border negotiations did not drop from the Lebanese internal discourse. In the run-up to the rig’s arrival, the Lebanese narrative campaign regarding the issue has even intensified over the past month.

Beginning in October 2020, as part of the negotiations, the Lebanese presented a new condition in which they marked the borderline with Israel at “point 29” (see map), which intersects the area of the Karish gas field. In fact, the new Lebanese demand is based on a maritime area of an additional 1,460 square kilometers of Israel’s economic waters in addition to the 860 square kilometers on which the discussion on the maritime border began.

As of this writing, the rig did not enter the disputed maritime zone between the countries in the Mediterranean and has not crossed line 29. In the past, both Israel and Lebanon emphasized the importance of negotiations. However, most of the internal Lebanese public opinion does not support a compromise, and there are even voices (even from the anti-Hezbollah camp) calling for a conflict with Israel on the issue, even if such a confrontation causes an all-out confrontation.

Apparently, under heavy American pressure, Israel and Lebanon will want to end the negotiations by September 2022. The American mediator, Amos Hochstein, is expected to arrive in Lebanon in the coming days.

Will the arrival of the Israeli drilling rig in a Karish gas field constitute a catalyst for military escalation?

During an all-out conflict, Hezbollah is very likely to attack the gas production infrastructure in the Karish field. We estimate that as long as such a conflict does not erupt, Hezbollah’s next decision point regarding its intentions will be this September when the gas production infrastructure in the field will be completed, and there is an Israeli intention to start producing gas from it.

In such a case, Hezbollah may decide to act militarily. The potential threats and the main security challenges posed by Hezbollah against the rig, against the gas production infrastructure in the Karish gas field, and against IDF forces securing the field can be reflected in several forms. Hezbollah can implement them in combination or separately:

It is important to note that at any given time, Hezbollah can launch a non-offensive UAV (such as a photographing UAV) to send a message and to please Lebanese internal public opinion.

What can stop Hezbollah from acting militarily?

Hezbollah’s significant involvement and responsibility in the Lebanese system of government require it to make official political considerations that affect its positions on issues related to Lebanese – Israeli relations, especially in the current period following the Lebanese elections, a period in which the identity of the next Lebanese administration is being formed.

Hezbollah and its leader Nasrallah do not want to be perceived as disrupting or preventing the negotiations and want to distance themselves from accusations that they are preventing the gas exploration and contributing to the continued economic deterioration in Lebanon. Therefore, they bother to point out now and at every opportunity that Hezbollah is subject to the decisions of the Lebanese government on this issue. Hezbollah recognizes the economic benefits that Lebanon anticipates from the success of gas exploration and expects to reap direct profits from it.

Review of the Lebanese narrative campaign:

As early as early May, the Lebanese narrative campaign restarted as the Singapore gas rig’s journey towards the Karish gas field began. At the beginning of May 22, Amid (Brig. Gen.) Bassem Yassin, head of the Lebanese maritime border marking delegation, said that an Israeli drilling rig was “on its way to Palestinian waters to steal the Lebanese gas in the Karish shared field…” Israel must not be allowed to drill, and this can be done by many means: diplomatic, legal, and technical. A scenario of stopping drilling using rockets (as he claims happened in Operation Guardian of the Walls when Hamas fired missiles at the Tamar gas field) can be repeated from Lebanon, but it depends on the decision of the State of Lebanon or Hezbollah.

Referring to the American mediator, Nasrallah said that “you can negotiate, but not in Rosh HaNikra and not with Hochstein neither with Frankstein nor with any other Stein that will come… American mediation that sides with Israel will lead nowhere.”

In a threatening message, Nasrallah noted that “if Israel prevents Lebanon from extracting gas from the disputed areas, Hezbollah will also prevent Israel from removing the gas. No foreign company will reach Karish when the resistance launches a threat…”

On May 25, Nasrallah called on the Lebanese government to begin drilling in the maritime territory without taking the United States’ position into consideration and that it takes courage to get gas and oil out of the sea.

On June 5, When the drilling rig arrived at a Karish gas field, the Lebanese heads of state exacerbated their tone, but as the hours passed, they seemed to be looking for a way to de-escalate their rhetoric. The Lebanese president initially noted that negotiations to mark the maritime borders continue to occur, and any action in the disputed region would be considered a hostile act.

Prime Minister Mikati said that Israel’s attempts to create a fait accompli and thus create a new crisis in a disputed region are dangerous and will create tensions that one cannot predict their consequences. Mikati called on the UN and the relevant parties to correct the situation and compel Israel to stop its provocations. The solution is a return to negotiations based on Lebanon’s lack of renunciation of its rights, resources, and territorial waters.

On June 6, after a meeting with President Aoun, Prime Minister Mikati made a more moderate statement. Mikati noted that Lebanon wants the American mediator to return to Beirut to discuss the issue of completing the negotiations on the maritime border. Indeed, shortly after, an announcement of the expected return in the coming days of the American mediator, Amos Hochstein, to Lebanon was published.

Senior Hezbollah figures also appear to have moderated their statements. According to Naeem Qassem (Hezbollah’s deputy secretary-general) and Hashem Safi al-Din (head of the Executive Council), Hezbollah is subject to the state in such decisions. The resistance is a strong and effective option that Lebanon can use to protect its resources and achievements. When the State of Lebanon says that Israel has violated the international border, then Hezbollah will respond.

It should be noted that Nasrallah presented this approach as early as the resumption of negotiations in October 2020. He added that Hezbollah would be committed to a solution determined by the state. The recent election campaign and the need to please internal public opinion apparently caused senior Hezbollah figures and, first and foremost, Nasrallah to temporarily radicalize their remarks on the subject.

In any case, we will wait for Nasrallah’s speech, which is expected to take place on June 9. It is very possible that Nasrallah will address the issue of negotiations on the maritime border. It will be interesting to see if Nasrallah makes moderate statements or chooses extremism.

Brig. Gen. Bassem Yassin, head of the marking of the maritime border Lebanese delegation, also toned down his remarks. On June 8, he said that Lebanon wanted to negotiate the borders so that the two countries could enjoy their natural resources. The countries want to invest in life and their economies and therefore need a just solution.

In conclusion, we estimate that the various parties in Lebanon, especially Hezbollah, have no interest in causing a military escalation at this stage. The State of Lebanon and its current leaders (the President and the Prime Minister) are interested in a settlement.

Nasrallah noted that as long as Israel does not interfere with Lebanon extracting its resources from the sea, Hezbollah will not interfere with Israel. The central question is how will Hezbollah treat the start of independent Israeli gas production in September 2022 if negotiations on the maritime borders between Israel and Lebanon break down or alternatively fail?

Hezbollah has always acted solely in its own interests (with Iranian support). Hezbollah will always continue to act only in its own best interests. Hezbollah is less interested in the Lebanese state. Factors such as Iranian influence or pressure should also be considered due to a desire for revenge against Israel or from the desire to proactively create regional escalation to change the rules of the game and regional status.