Is Nasrallah contemplating war (backed by Iran), or is he again making empty threats? 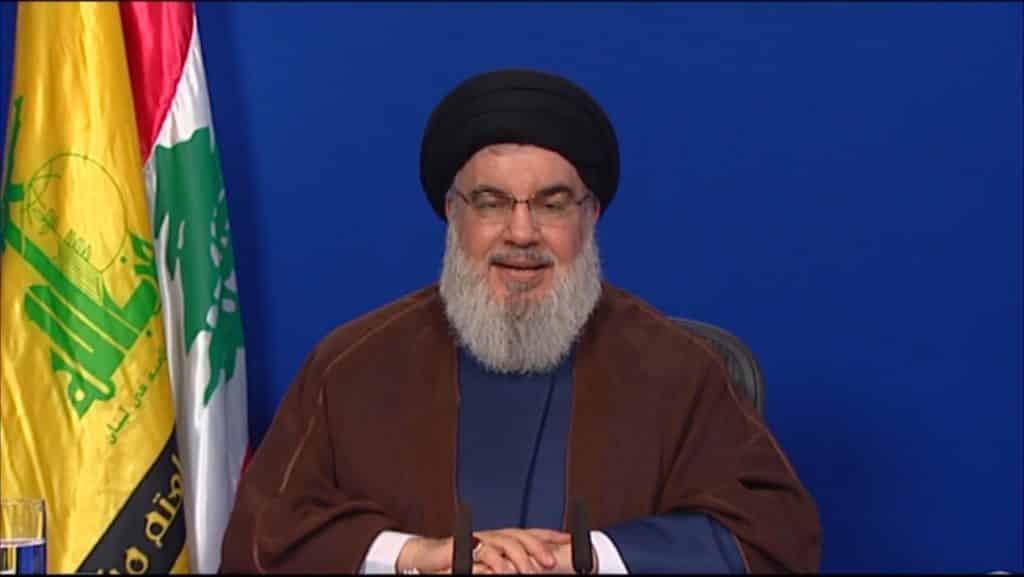 As expected, the issue of the maritime border between Lebanon and Israel continues to be the main issue that Hezbollah leader Hassan Nasrallah communicates in his speeches.

Until June 2022, Nasrallah and other senior Hezbollah figures claimed that Hezbollah’s policy was not to intervene in the matter and that the decision regarding the maritime border was the sole responsibility of the Lebanese state. In his speech on June 09, 2022, following the positioning of the Karish gas rig on June 5, 2022, Nasrallah changed his approach and made it clear that this step was to be considered an attack on Lebanon. Nasrallah began to portray a new equation, stating that this act was a de facto occupation of Lebanese land and assets on Israel’s part. Nasrallah made it clear that this subject is in the Lebanese national interest, seeing that the income deriving from the gas field would go to the state, thus contributing to the Lebanese coffers, enabling it to get out of its financial plight. Therefore, all Lebanese must show national responsibility, fight for their rights and prevent it from the Zionist enemy. Nasrallah compared the maritime border issue to the “liberation” of south Lebanon from Israel.

Nasrallah stated that Hezbollah would serve as a “resistance” and “defender of Lebanon” and mentioned the triangular equation of the Lebanese army, the Lebanese people, and the Lebanese resistance. Nasrallah made it clear in this speech that the resistance and Lebanon do not want war but want Lebanon’s oil and gas to remain in Lebanese hands, and therefore they are not afraid of war, and the Israeli enemy must understand this. Nasrallah made it clear that Hezbollah was not a party to the negotiations and would not be part of them and that the resolution was in the hands of the president, the prime minister, and the head of the parliament.

(Note: For more information, see our article presenting an overview of the Lebanese position in the negotiations vis-à-vis the Israeli position, what are the circumstances and what are the scenarios that could lead to a military escalation:

Since June and until now, it is evident that significant progress has been made in the negotiations between Israel and Lebanon. However, on June 29 and July 2, Israel intercepted altogether 4 UAVs launched by Hezbollah at the Karish gas rig as a hint of Hezbollah’s capability and as a threatening message to Israel’s infrastructure assets.

On July 13, Nasrallah gave his annual speech marking the anniversary of the outbreak of the Second Lebanon War in 2006. Nasrallah intensified and expanded the threat to Israel regarding maritime borders and gas resources. He began his speech with verses from the Quran, the tradition of Al-Hajj (22), from verses 39 to 40. These verses mean Allah will help Muslims fight those who do injustice to them. This quote may indicate his impending intentions…

In his speech, Nasrallah stressed the Israeli-American project intended to isolate Iran and the attempt to unite Arab countries against Iran. He linked this to President Biden’s recent visits to the Middle East, emphasizing Israel and Saudi Arabia. He also noted that Biden’s visit was against the backdrop of the gas and oil crisis, so Lebanon must protect its rights.

Nasrallah made it clear that the oil and gas issue was in Lebanon’s national interest to bail it out of economic collapse. He stated that the war in Ukraine is forcing Europe and the U.S. to look for alternative oil and gas resources. Hence it is an opportunity for Lebanon. He claimed that Lebanon’s window of opportunity is within a time frame of the next two months, i.e., by September, when Israel will already commence the production of gas, it would be too late.

Nasrallah called on the Lebanese government to exert the organization’s power and status for the benefit of the negotiations. Hence the UAVS were launched at the Karish field. Hezbollah will take any step it sees fit to support Lebanon in the negotiations, and launching the UAVs was only the beginning; Hezbollah will not sit idly by.

At the end of his speech, Nasrallah enhanced his messages and threatened that if Lebanon did not receive its rights and portion of the gas, Israel would also not receive its part and would be dragged into war. He made it clear that it is better to die as a martyr in a war than to die of starvation from the economic situation that Lebanon is facing because after war, there is a prospect but after an economic collapse, there is nothing.

Nasrallah used a phrase from his famous speech from the Second Lebanon War in 2006 regarding the range of Hezbollah’s missiles, saying that “Karish ma ba’ad Karish, u’ma ba’ad ba’ad Karish,” meaning that Hezbollah can attack and hit Karish gas field and any other Israeli assets in Israeli territory.

How does the verse from the Quran with which Nasrallah opened his speech relate to this situation? It’s Nasrallah’s view that the Arab people, emphasizing Islamists, are disadvantaged and oppressed. The West, led by the United States and Israel, is trying to preserve this situation. Hezbollah as the defender of Lebanon, will receive the help of Allah and will be able to stand up to the oppressors.

Is there really a transition in Nasrallah’s approach and policy? From an approach that accepts all the Lebanese government decisions regarding the issue of gas and maritime borders to an approach saying that if Lebanon’s demands and rights are not accepted, Hezbollah will take the necessary steps to implement them.

In our assessment, the change in attitude and policy stems from Nasrallah’s desire to preserve and uphold Hezbollah’s interests and those of Iran. Nasrallah may have speculated that he might lose control if he does not take an offensive approach (both verbally and operationally) and does not take matters into his own hands. This is in addition to his desire to preserve his main narrative: to turn the issue into a symbol of resistance towards the continuity of the organization’s being the defender of Lebanon, attentive to its needs and interests.

“Going all the way” or “pushing the boundaries”? It is possible that Nasrallah is interested in “going all the way” and starting a war with Israel by September when the pretext is the maritime border and gas fields. On the other hand, Nasrallah may be pursuing a policy of “stretching the boundaries,” taking offensive actions that, in his view, Israel will contain and not respond to for its reasons (such as political instability and the pending elections).

What are the Iranian and Hezbollah interests behind the current policy, as expressed in Nasrallah’s last speech, perhaps even the waging of a war against Israel?

Is the headline “Accepting our rights or a war,” as published on July 14 in the Al-Akhbar newspaper (Hezbollah’s well-known media mouthpiece) the day after Nasrallah’s speech, really true? Do the Lebanese people and government think like Nasrallah?

Not sure at all. The economic, social, medical, and infrastructural implications and consequences on the Lebanese state deriving from a possible war are enormous, and even then, it is not certain that Lebanon will receive its demands but might reach the same results if they diverted to the diplomatic direction. As in 2006, there is a chance that Nasrallah will drag Lebanon into a war with Israel, in which only the Lebanese side will lose.