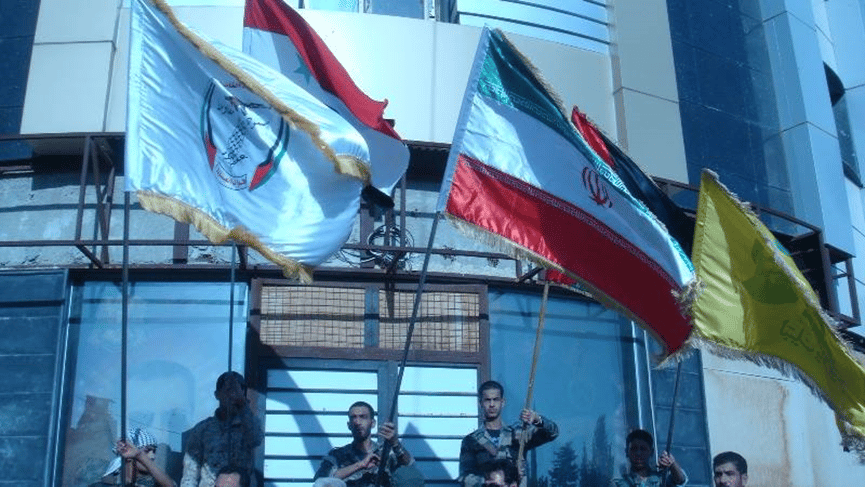 The cultural advisor at the Iranian embassy in Damascus, Abul-Fadl Salehi Nia, wrote in the Al-Watan (a daily Syrian pro-regime newspaper) in November 2019 that “the implementation of the Iranian vision of a new Middle East includes Iran, Iraq, Syria, and Lebanon. This concept will affect the global balance of power and prevent the United States and its Western allies from controlling a Middle East comprised of small, divided countries…”

In the early morning of July 22, 2022, an airstrike was carried out against a weapons warehouse in the Hudzajra area of ​​Sayyid Zaynab in southern Damascus. The attack took place near the community center named after the martyr “Haytham Suleiman” (also called the Shuhada al-Muqawamah sports center), which was established with Iranian funding in the year 2021 by the Iranian “Jihad al-Bana” organization.” In our estimation, the attack was carried out against a shipment of electronic weapon components intended for Hezbollah’s precision missile project and its self-production of UAVs. The attacked site was used as a temporary storage place in the civilian surroundings of Sayyidah Zaynab, thus serving as a human shield. The attack was carried out before it reached Hezbollah in Lebanon.

Similar to the al-Bukamal, Al-Mayadeen, Deir ez-Zor areas in Aleppo and Homs, and southern Syria, the area of Sayyidah Zaynab on the southern outskirts of Damascus is also an epicenter of a growing Shiite base with Iranian affinity. In fact, it is Syrian territory controlled by elements of the radical Shiite axis led by Iran.

The civilian entrenchment in Sayyidah Zaynab is demonstrated through immigration and demography, the confiscation of land and real estate, the establishment of religious centers and social associations, and religious tourism, which also serves as a platform exploited for military purposes. The military entrenchment in Sayyidah Zaynab is a logistical anchor and a “transit station” for the transfer of weapons for Hezbollah in Lebanon.

The radical Shiite axis, led by Iran, acts to obtain a military and civilian foundation in all of Syria and the geographical anchors throughout the land corridor areas. The Iranian Revolutionary Guards Qods Force received responsibility for securing the corridor routes in Syrian territory. This security mission was assigned to the foreign Shi’ite militias that were “imported” to Syria by the Iranians under the direction of Qasem Soleimani, former commander of the Qods Force. The security mission also included protecting local and foreign Shi’ite populations and Shi’ite holy sites throughout Syria.

All the areas mentioned above are geographical anchors that support the Iranian corridor from the east (Iran) to the west (Lebanon) in a civilian and military manner, within the framework of the Iranian strategic concept. The radical Shiite axis, headed by Iran, concentrates large efforts to “link” geographic anchor areas in Syria through civilian entrenchment similar to Hezbollah’s model in Lebanon.

Sayyidah Zaynab has added value since it is considered a Shiite holy site. The area of Sayyidah Zaynab is built around the tomb of Zaynab, the granddaughter of Muhammad a nd daughter of Ali ibn Abi Talib, the fourth caliph to Islam and the first Shi’ite imam (there is debate as to whether the real tomb is in Damascus or Egypt, but this debate does not detract from the importance granted to the Damascus site by Shi’ite believers). According to Shi’ite tradition, Zaynab was present at the Battle of Karbala (680), and after her brother lost the battle, she was taken to Damascus and acted there to spread Shi’a. Her grave became a Shiite holy site thanks to her actions and family heritage.

The added religious value constitutes a platform for the radical Shiite axis led by Iran in establishing a central geographic anchor in Damascus, the capital of Syria, as part of the strategic concept of the Iranian corridor to Syria and Lebanon and the spread of the Islamic revolution. throughout the Middle East.