Nasrallah slams ‘Deal of the Century’ 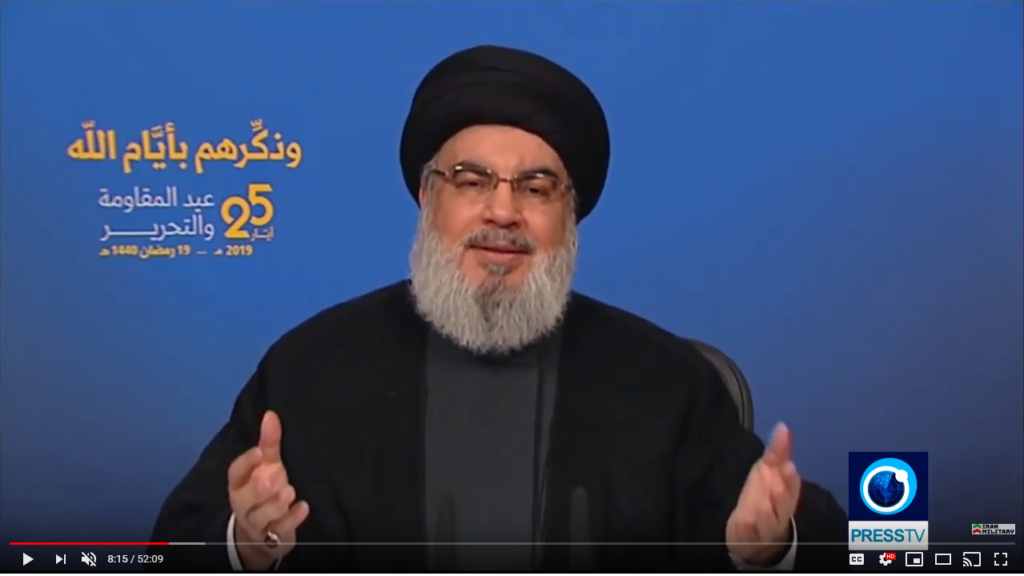 [vc_row][vc_column][vc_column_text]Hezbollah secretary general Hassan Nasrallah slams all American initiatives and actions aimed at fulfilling the Deal of the Century. Nasrallah used his latest speech last Saturday, on the anniversary of Resistance and Liberation Day, to build his own case and to justify his rejection of the deal.

Nasrallah was careful to maintain his known tactic of reminding the people that he is the protector of Lebanon. He claimed that without the Resistance, Israel would not have unilaterally withdrawn in 2000, and in that scenario, south Lebanon would have been recognized by the US as being under Israeli sovereignty (referring to the case of the Golan Heights).

In addition, Nasrallah stressed that Lebanon will not give up a single inch of its sovereignty to Israel – neither land nor water. He sustained his firm position on the territories disputed by the two countries and even created his own conspiracy to justify his refusal to the Lebanese. As Nasrallah suggested, the US conspiracy might include giving parts of south Lebanon to Israel.

The Nasrallah speech aimed at preparing the preamble to his justification for rejecting the Deal of the Century.  Moreover, it served as a reminder to the Lebanese people that without Hezbollah’s existence, Israel would have invaded south Lebanon.

Nasrallah’s messages are not surprising. They are another layer in the ongoing campaign to indoctrinate hate of Israel and the United States within the Lebanese society.

It is important to clarify that Israel has no intentions of invading Lebanon neither now nor in the past. It has done this only since terrorist groups in south Lebanon made life unbearable for civilians in the north of Israel.