Is the Shiite axis seeking an alliance with China? 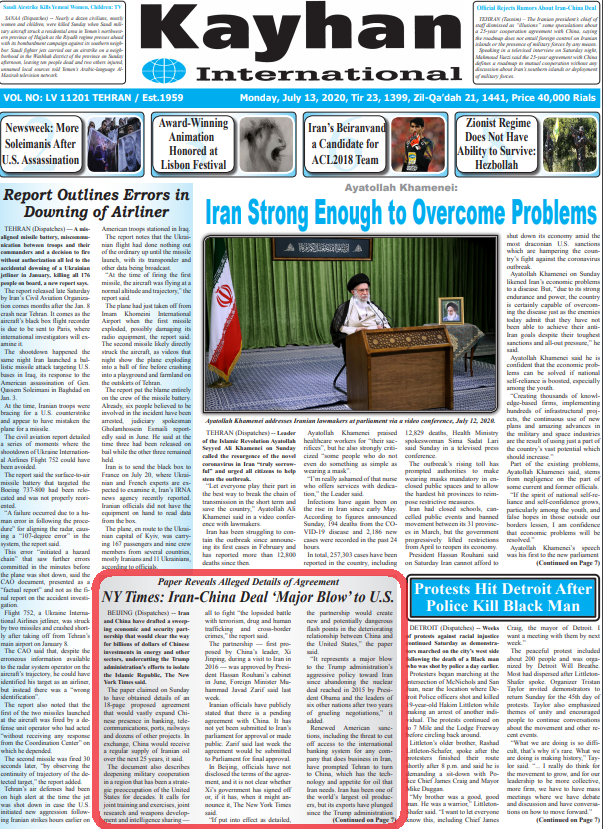 The Iranian-led Shiite axis looks east creating an alliance with the Chinese superpower, serving as a “force multiplier” against the United States and improving its position vis-à-vis Russia

In Nasrallah’s recent speeches, he made sure to convey a message saying that Lebanon’s facing to the east does not contradict its cooperation with the West. Nasrallah expressed that “the Lebanese state as the sovereign can turn to China as an option for aid and economic investment in Lebanon and that it is not Hezbollah’s role …”.

Hezbollah is interested in cultivating a new narrative: China will serve as Lebanon’s economic lifeline and so Lebanon will be saved from drowning in the sea of ​​American sanctions, and therefore will not be dependent on the grace of the United States.

Nasrallah’s new narrative is not a hollow one. It seems to stem from a broader move led by Iran, Hezbollah’s patron. Iran has been trying for several years to implement a strategic cooperation agreement with China, the eastern superpower. The agreement has not been signed yet, but recently a draft of the agreement was leaked (probably by the Iranians). Upon its leak, the Iranians publicly announced that the agreement would be signed towards the beginning of the next Persian year (March 2021).

We estimate that the “leak” of the agreement stems from a clear Iranian interest in speeding up its signing, especially in light of Iran’s difficult economic situation, and its desire to create a bypass axis around the international sanctions in general and the American sanctions in particular. In addition, the Iranians see themselves threatened by Russian activity that is putting a halt on their operations in Syria. This activity manifests itself by Russian attempts to weaken forces identified with the Iranians with an emphasis on the Shiite militias, and on the weakening of Syrian military units identified with the Iranians. The alliance with China is a force multiplier for the Iranians against the Russians as well.

The Chinese interest in this process is the provocation of the American nemesis and the strengthening of their economic and security foothold in the Middle East. Based on the Iranian platform, the Chinese will strengthen their status and influence in both Syria and Lebanon improving their position vis-à-vis Russia in the race to rehabilitate the infrastructures of these countries.

The headline of the Iranian newspaper “Kayhan” from 13 July summarizes the purpose of the agreement reached between the two countries in one sentence: “The partnership with China will be a blow to Trump’s policies.”

Under the apparent agreement, China is to invest hundreds of billions of dollars in Iranian infrastructures such as; oil, gas, trains, ports (sea and aviation) etc. in exchange for Iranian supplied oil and a foothold in the Middle East as noted above.

The entire Shiite axis, headed by Iran, is desperate to find a way out of the entanglement deriving from the international sanctions. Hezbollah as the central proxy of Iran toed the line, cultivating the narrative “East” among the Lebanese public opinion, while at the same time influencing the government policy outline. As proof to the above, the “Al-Mayadin” network reported on 3 July, that the Lebanese government appointed Imad Hoballah, the Minister of Industry (on behalf of Hezbollah), project manager of the development of relations with China …

In Syria, which is also part of the Shiite axis, voices started to be heard in favor of turning to the east … With the recent commencement of the “Caesar act”, Bouthaina Shaaban, communications adviser to Syrian President Bashar al-Assad, announced, that Syria will examine the consequences and seek new cooperation with China.

There is a saying; there is no vacuum in the world. Any space that an immense force vacates, another force takes its place. Therefore, the important course of sanctions designed to isolate Iran and its metastases in the Middle East should be accompanied by further moves that will ensure that there is indeed an effective isolation. No superpower should violate them. In addition, the rapprochement between the Shiite axis, China and Russia, can demonstrate exactly what kind of policy should be formulated on other issues as well, such as, the American presence in the Middle East or the future of American aid to the Lebanese army. Wherever the United States or NATO will not be, another factor will enter – whether Chinese or Russian – and take their place. This issue should be facing the decision-makers when it comes to formulating the US policy in the Middle East.