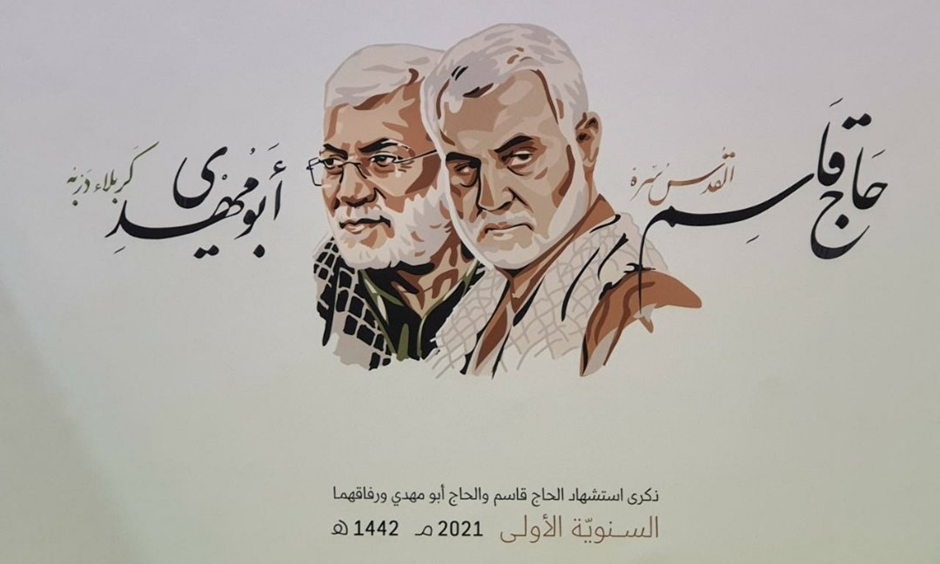 On January 03, 2020, after disembarking his plane, returning from another operational visit to Syria, Qassem Soleimani was assassinated by means of an airstrike, immediately upon his departure from Baghdad airport.

Assassinated along with him was Abu Mahdi al-Muhandis, commander of the large Iraqi Shiite militia “al-Hashd al-Shaabi “.

How did the assassination affect Iranian activity in the region? Did Soleimani’s replacement, Esmail Qaani, manage to “fill his shoes“? How will the Iranians behave in light of the severe damage they have suffered over the past year, such as; cyber-attacks, mysterious explosions throughout Iran, the assassinations of Soleimani and Fakhrizadeh (head of the Iranian military nuclear program), etc.?

Our findings and conclusions, based on the ongoing monitoring we carry out, are consistent with the Chief of Staff’s remarks. All the Iranian-led radical Shiite axis actions throughout the land corridor (Iran-Iraq-Syria-Lebanon) i.e. proxy forces activities, intelligence gathering, weapons transfers, the planning of terrorist attacks, and the attempts to execute them against Israel, the Sheiization and civil entrenchment continue. However, we have not identified a significant qualitative leap in this activity.

We estimate that the slowdown in the Shiite radical axis activity is mainly due to their desire to invest more in the survivability of the infrastructures they have already set up and established, throughout the land corridor. The ongoing intensive IDF activity against the establishment of the Shiite axis and its actions (as a result of the IDF’s “campaign between wars” [CBW]), restricts the radical Shiite axis’ freedom of action and causes it to conduct itself slowly and carefully. The CBW was carried out also on Soleimani’s watch. However, during his time, Soleimani did everything in his power to see that the CBW did not harm the axis’ activity or its entrenchment efforts throughout the land corridor.

During the past year, we identified seven occasions, indicating Soleimani’s successor, Ismail Qaani’s visits and movements throughout countries belonging to the radical Shiite axis. According to our information, Qaani visited Iraq four times (in March, June, November, and December 2020), Syria twice (in March and June 2020) and Lebanon once (in November 2020, meeting with Nasrallah). Soleimani, on the other hand, devoted many visits to the Syrian arena. In Soleimani’s time, compared to the current era, the Syrian arena was much more volatile. Back then, Soleimani’s presence in Syria was required to ensure the success of the Iranian – led radical Shiite axis’ combat against Syrian regime opposition elements and global jihadists such as ISIS.

The Iranians fear anti-American action across Iraq, which could give the Americans an excuse to act against them. It appears that the purpose of Qaani’s visits to Iraq is, among other things, to curb Iraqi proxy militias.

The Iranians operate in Iraq on two parallel axes: First, increasing their influence over the Iraqi government. Second, strengthening the power and influence of the Iraqi Shiite militias on all aspects of the goings-on in the country in general and in particular to establish them as an alternative to the Iraqi institutions of government.

Qaani does not reach the level of Soleimani’s performance. He does not have the ability to combine operational operative understanding with the unique management and diplomacy capabilities that Soleimani had (capabilities that also included; activating extortion, threats, and assassinations of rebellious elements if necessary, without batting an eyelash…).

The supreme leader, Khamenei is a cautious man. The policy he outlines is to be careful not to carry out any activity that could lead to uncontrolled escalation. It seems that at this point the Iranians are not interested in war. However, do not be mistaken. The Iranians have many sound capabilities to inflict severe damage on both Israel and the United States. The range of options available to them is wide: offensive cyber activity, activating terrorist infrastructures spread-out around the world, activating radical Shiite axis proxies throughout the Middle East, shooting at Israeli or American targets in the Middle East using accurate weapons, etc.

Iran’s “retaliation” against Israel for the events of the past year has not yet been carried out. In our view, the Iranians will strive to carry it out but will do so in accordance with the policy outlined by the Supreme Leader: slowly, carefully, and without causing uncontrolled escalation. With or without revenge, the radical Shiite axis led by Iran will continue to operate in 2021 with the intention of establishing its presence and influence in the Middle East region in general and throughout the mainland corridor region in particular (Iraq-Syria-Lebanon). The Iranians do not intend to back down; the exporting of the Islamic Revolution ideology is stronger than anything…