Mid-March Is The Time Of “Revolutions” In The Middle East 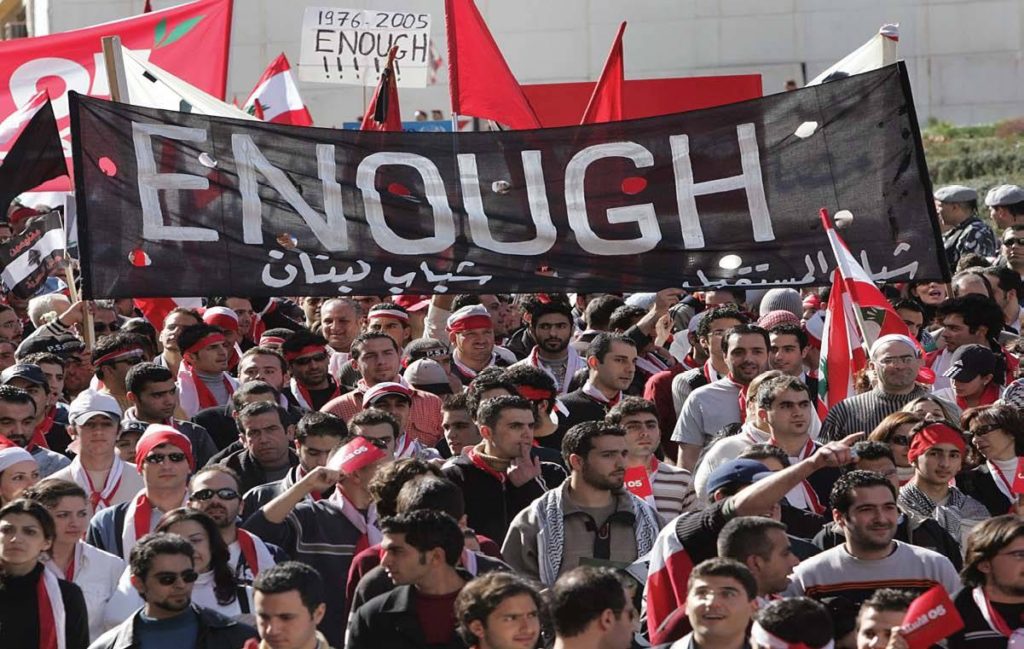 In 2005, the Lebanese took to the streets in what was then called the “Cedar Revolution” in a demand for the expulsion of Syrian forces from the country, following the assassination of Prime Minister Hariri. March 14 became the name of the movement led by his son, Saad Hariri, expressing opposition to Hezbollah and the desire to bring a new future to Lebanon.

A few years later during the “Arab Spring”, some argued that the Cedar Revolution was the first stage of the Arab Spring. The protest did succeed in getting the Syrian forces out of Lebanon, holding elections, and a deeper involvement of the international community in what is happening in Lebanon, in a way that is backed by Security Council decisions and monitoring their implementation.

Today there is nothing left of it. Saad Hariri has not been able to form a government for several months. Lebanon is neck-deep in the biggest crisis in its history and Hezbollah is taking advantage of the situation to deepen its grip on the country’s civilian mechanisms, in a way that makes Lebanese state institutions irrelevant.

We searched for a mark across Lebanon for this important day – the Cedar Revolution, March 14 – but it seemed that we remembered and the disappointed Lebanese almost forgot. The ones who did mention it, defined March 14, 2021, as a sad day that symbolizes the stagnation and depth of the crisis in Lebanon.

At that time of year, in 2011 a few teenagers from the southern Syrian city of Daraa set out to spray-paint graffiti against the Assad regime, inspired by the “Arab Spring” in neighboring countries. The teenagers were arrested and the fate of some of them is unclear to this day. Syria has become a symbol of the failure of the “Arab Spring” and its residents have been living for a decade in a “stormy Syrian winter.”

Syria has become a battleground not only between the citizens and the corrupt dictatorial regime but also between Sunni Muslims and Shiite Muslims And between regional and international foreign forces. Each of them plays in the diverse Syrian society as a chess piece: Turkey supports extremist Sunni organizations in the northwest against the Kurds in the northeast. Iran is based in the south near the Israeli border and the west in the Alawite and Shiite areas. The United States holds a small area at the southern border crossing to Iraq, and Russia – is almost everywhere, but mostly maintains access to the Mediterranean in the Tartus area.

The two mid-March revolutions that began with a lot of hope for a better future in two countries neighboring Israel have failed. I was trying to figure out why and there is probably more than one reason. But I wanted to point out a particularly interesting reason.

The united side, the one that manages to produce a professional military force, the one that presents its policies consistently and comprehensively is the victorious side.

The rebel citizens on the eve of the revolution in Syria were an absolute majority and in Lebanon, there were at least half, divided into a variety of sects, religions, interests, and different ideologies. They failed to produce unity for the purpose for which they took to the streets and they lost. Their elites were the first to leave these countries. And today the Syrians and Lebanese are lost, like a flock without a shepherd.

On the anniversary of these two “revolutions”, I am sad to write these words. I would like to see a better future in the countries neighboring Israel. In the countries, my father and grandmother came from.

Unfortunately as an Israeli, I have learned that despite the desire to help, we must not interfere in the internal affairs of these countries. Such an intervention directs the anger towards Israel and does not necessarily solve the problem. This happened to us in 1982 when we got caught in the “Lebanese mud” for 18 years in an attempt to make the Gemayel family and the Christian leadership rule over Lebanon.

Since then – in Syria, Israel has pursued a completely different policy: intervening solely in matters that directly affect the Israeli interest, such as the Iranian military establishment in Syria, or providing humanitarian aid by the border.

From the Israeli perspective, the international community from Russia to Europe and the United States have much more leverage on Syria and Lebanon. The question remains: Do all these players use their leverage to bring prosperity to these countries?