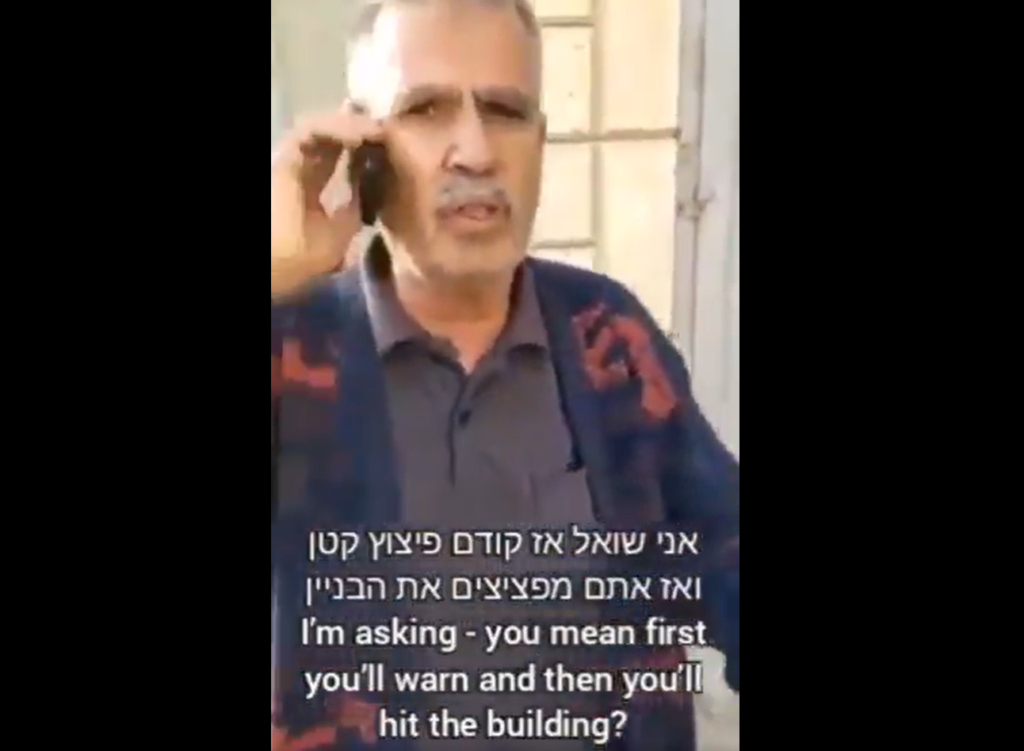 Hezbollah in Lebanon, Hamas, and the Palestinian Islamic Jihad in the Gaza Strip stow weapons and locate headquarters and command posts in civilian structures and in proximity to crowded populated centers.

This is how they establish their terrorist infrastructure under the auspices of the “human shield” tactic, as part of their routine and emergency conduct. On top of this, they carry out the firing of missiles from and around populated buildings in a heavily civilian environment.

To counteract this activity, the IDF has to take counterterrorism measures against these structures used by terrorist organizations, even if they are amid the heart of the civilian population. In order to avoid harm to innocent civilians and to deal effectively with the “human shield” tactic of the terrorist organizations, the IDF has developed a unique method called the “knock on the roof” tactic. The purpose of this method is to provide the civilian population serving as a human shield against the oncoming counterterrorism activity, an early warning and thus allowing the same population to evacuate itself and safely move away from the structures used as terrorist infrastructures.

The civilian population warning operates in a graduated manner. The first phase is a telephone call verbally warning the residents inside and near the incriminated building stating that they should evacuate the premises and move away.

The second stage is the controlled firing of a special missile from a UAV, aimed at the roof of the structure, which mainly causes noise, bringing about a conscious effect that one cannot ignore.

Only after carrying out these steps, and ensuring that there are no innocent civilians inside and around the building, will the IDF act to destroy the building in a targeted manner without causing any additional collateral damage.

Is there any other country in the world making a similar effort to refrain from harming innocent civilians on the opposite side during combat, while its own citizens are threatened and indiscriminately shot at?

The following video shows more fascinating evidence from the 2019 round of hostilities against the Palestinian Islamic Jihad in the Gaza Strip (a bout of fighting that took place between 12-15 Nov.2019):

The video aired on Al-Jazeera TV station (which does not favor  Israel, to say the least …) is a television interview with Gaza strip resident, Hamuda Abu Amra, whose home was destroyed by the IDF since it functioned as a terrorist infrastructure.

The Gazan describes the chain of events and without intending it his testimony serves as an authentic defense argument and justification for the IDF’s unique method of action against the “human shield” tactic used by terrorist organizations.