Is Hezbollah Collapsing the Lebanese State Intending to Take Over it? 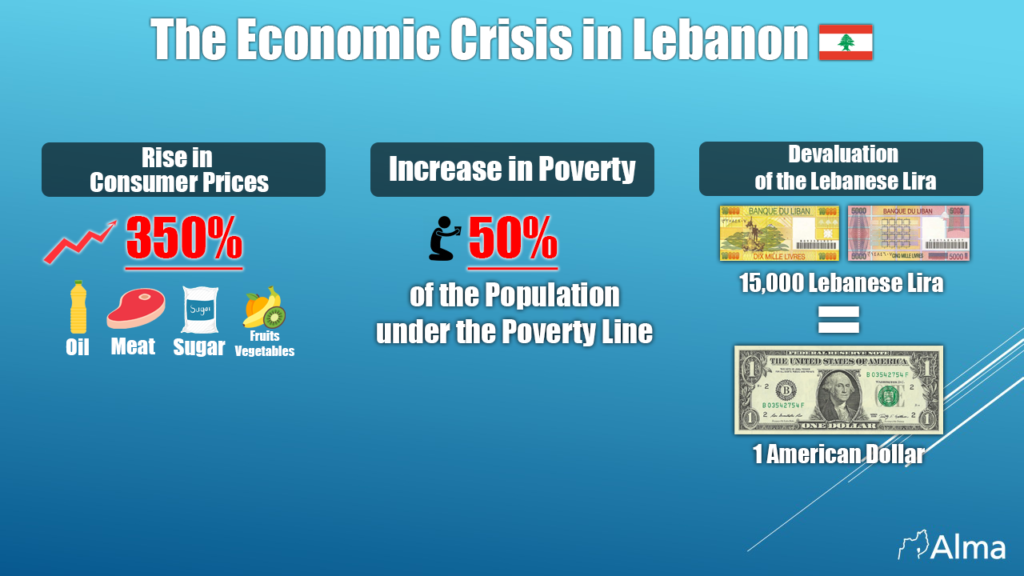 We would like to present a theory much discussed by the Alma team. Although we cannot prove this theory, we are interested in examining it. If this theory is correct, it will have widespread consequences for the region’s future and Israel’s security.

Lebanon is knee-deep in an ongoing political and economic crisis. Subsidized medicine, gasoline, and diesel fuel are in short supply, electricity is provided only during predetermined hours of the day, food prices are sky-high as a result of the considerable erosion of the Lebanese pound, 50 percent of its population lives under the poverty line and military salaries are being paid with difficulty. Civilian infrastructures are collapsing and demonstrations take place daily. There is no solution on the horizon.

Is there an invisible hand steering events to this chaos? Is someone trying to make Lebanon collapse? If so, why? Does someone want Lebanon’s political, economic, and military infrastructures to “disappear”, leaving behind a vacuum that can be filled swiftly and without resistance? Currently, there is no proof that this is the case – but there are many indications for it.

According to our theory, Hezbollah, Iran’s emissary, is “swallowing” Lebanon. Hezbollah learned its lessons from the events of May 2008, in which it used military force against the Lebanese government and the political party opposing Hezbollah (named the “March 14th Alliance”). Hezbollah aims at foiling any political and economic solution to Lebanon’s plight to deliberately cause chaos and Lebanon to collapse at a timing that suits Hezbollah. This way, Hezbollah will be able to take control of Lebanon in a relatively quiet manner and avoid using force, which can potentially cause a civil war. Quietly taking control will ensure Hezbollah will be accepted by the Lebanese people as a savior and not as a cruel dictator. Moreover, until this will happen, many of Hezbollah’s opposers will disappear or leave Lebanon out of despair.

In addition, Hezbollah’s organic military infrastructure and the widespread support of the Shiite sector of the LAF can provide a layer of deterrence against any potential resistance. It should not be forgotten that today, 50 percent of the LAF and 40 percent of the LAF combat forces are Shiite. This percentage apparently represents the Shiite population’s percentage of Lebanon’s general population as well, and some claim that there are even more than that.

In his televised address on June 25th, Nasrallah shot down the attempts to blame Hezbollah for the whole situation. However, it seems that what he said regarding importing oil in containers from Iran rather strengthens this theory. “Why not profit form alliances in order to help the Lebanese nation?”, asked Nasrallah in his speech with regards to Iran.

The goal of the expansion of the Islamic Revolution is absolute control of other states, establishing the Shiite Islamic ideology in them and turning them into additional Iranian provinces. In this regard, the assumption that terror organizations are not interested in taking control of a state contradicts the Islamic Revolution’s view that sees the religious leaders as the political ones as well, and that leadership of a state by religious leaders is the only way to lead one.

The civilian and military infrastructures in Lebanon established by Hezbollah are a distinct and immediate alternative for Lebanon’s collapsing ones. The fact that Lebanon’s infrastructures are so caused Hezbollah strive to make the Lebanese population (and not just the Shiites) develop a dependency for them. When this dependency will be developed, Hezbollah’s control of Lebanon will be complete. There is a likelihood that this theory of the deliberate collapsing of Lebanon is Hezbollah’s and Iran’s secret policy regarding Lebanon.